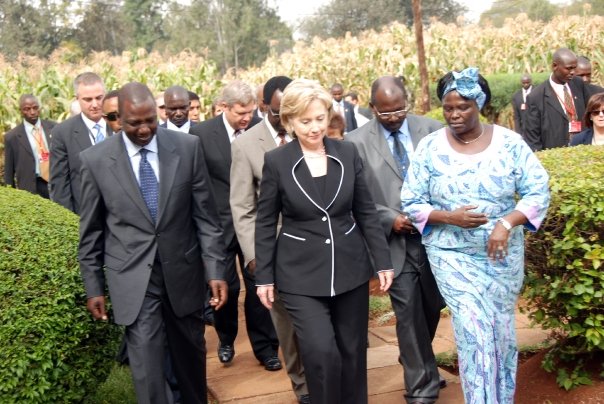 Then this weekend, I decided to treat myself and downloaded Chelsea and Hillary Clinton’s latest book, The Book of Gutsy Women: Favorite Stories of Courage and Resilience. One of the reasons I went ahead and bought the book is because the description of the book included a mention of Wangari Maathai, a woman “who sparked a movement to plant trees, understood the power of role modeling.” (The Book of Gutsy Women) It seemed like a perfect storm of things I didn’t know…what was Kenya’s tree-planting initiative and who was Wangari Maathai? And as anyone who knows me can attest, I don’t like not knowing things. So today you get my introduction, and maybe yours, to Wangari Maathai and the Green Belt Movement.

END_OF_DOCUMENT_TOKEN_TO_BE_REPLACED 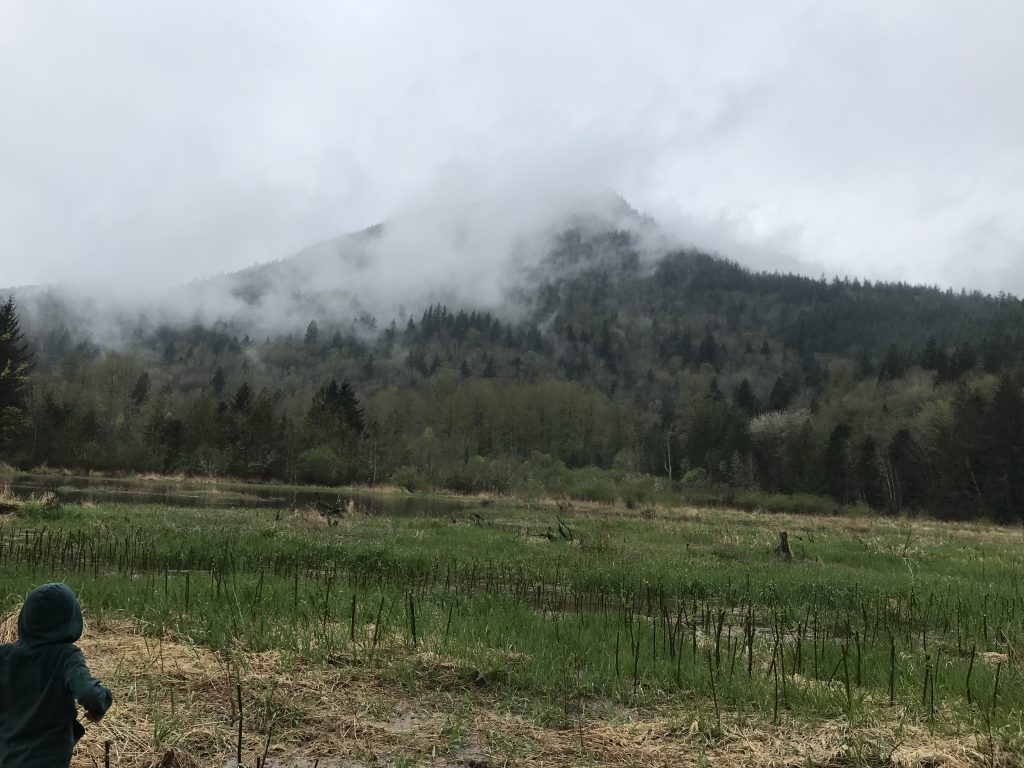 Foggy and rainy day at Kendall Creek and wetlands below Sumas Mountain, Whatcom Co. WA on Earth Day, April 20, 2019. The foreground sticks are Sitka Willow cuttings planted by a class of 2nd Graders. Note the mats of invasive Reed Canarygrass covering everything with proximity to the water.

END_OF_DOCUMENT_TOKEN_TO_BE_REPLACED

On Tuesday afternoon, Democratic Party presidential candidate Hillary Clinton and former Vice President Al Gore spoke to a crowd in Miami. The topic was climate change and how every vote matters:

Hillary Clinton will make solving the climate crisis a top national priority. Her opponent, based on the ideas he has presented, would take us toward a climate catastrophe.

Vice President Gore also spoke out about local issues, calling for the election of Patrick Murphy to the U.S. Senate instead of re-electing climate change denier Marco Rubio and urging a NO vote on an amendment that will discourage renewable energy:

Here is something else you can do — vote no on initiative one on your ballot.

Hillary mentioned that there are fewer solar jobs in the sunshine state, Florida, then there are in New Jersey. Actually, Florida also lags behind Massachusetts, which is even farther north. Despite having three times the population of Massachusetts, Florida has less than half of the solar jobs that have been created in Massachusetts. Massachusetts installed more solar energy last year alone than Florida has installed in its entire history. [AUDIENCE MEMBER: That’s ridiculous] Yes, it is ridiculous, that is exactly right. The head of one of the fossil fuel-burning utilities here actually said last year, yes, Florida is the Sunshine State, but remember it is also be partly cloudy state. Well, they are trying to cloud the truth by putting forward a phony baloney initiative that sounds like protects solar. It does not protect solar. The things they claim to protect solar are protections you already have. They are trying to fully you into amending your state constitution in a way that gives them the authority to shut down net metering and do in Florida what they did in Nevada and killed the solar industry. This is a question — our democracy has been hacked and the fossil utilities here have spent more than $20 million to try to pull the wool over your eyes. $20 million can buy a lot of wool. Amendment one would make it harder for homeowners to go solar. 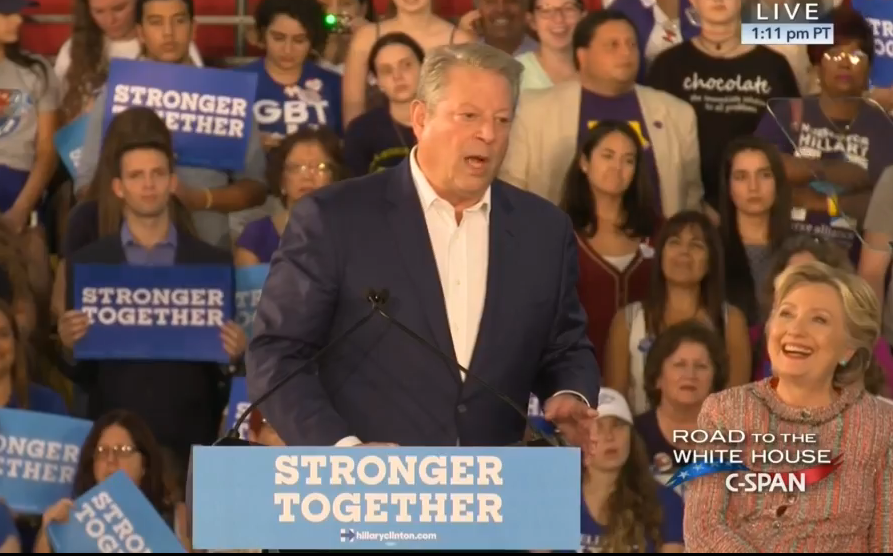 The choice could not be more clear.

END_OF_DOCUMENT_TOKEN_TO_BE_REPLACED

The problem is not solved because of this accord. But make no mistake, the Paris agreement establishes the enduring framework the world needs to solve the climate crisis. It creates the mechanism, the architecture, for us to continually tackle this problem in an effective way.

… I believe this moment can be a turning point for the world. We’ve shown that the world has both the will and the ability to take on this challenge. It won’t be easy. Progress won’t always come quick. We cannot be complacent. While our generation will see some of the benefits of building a clean energy economy — jobs created and money saved — we may not live to see the full realization of our achievement. But that’s okay. What matters is that today we can be more confident that this planet is going to be in better shape for the next generation.

From the White House:

Today, nations of the world have come together to announce a historic achievement: The most ambitious global agreement to combat climate change.

The Paris Agreement establishes a long term, durable global framework to reduce global greenhouse gas emissions. For the first time, all countries commit to putting forward successive and ambitious, nationally determined climate targets and reporting on their progress towards them using a rigorous, standardized process of review.

END_OF_DOCUMENT_TOKEN_TO_BE_REPLACED

President Obama spoke to those gathered at the COP21 Climate Change Summit in Paris on Monday.

(President Obama delivers remarks at COP21 in Paris on the global community’s need to address the threat of climate change. November 30, 2015.)

Nearly 200 nations have assembled here this week — a declaration that for all the challenges we face, the growing threat of climate change could define the contours of this century more dramatically than any other. What should give us hope that this is a turning point, that this is the moment we finally determined we would save our planet, is the fact that our nations share a sense of urgency about this challenge and a growing realization that it is within our power to do something about it. […] [What I saw in Alaska] was a preview of one possible future — a glimpse of our children’s fate if the climate keeps changing faster than our efforts to address it. Submerged countries. Abandoned cities. Fields that no longer grow. Political disruptions that trigger new conflict, and even more floods of desperate peoples seeking the sanctuary of nations not their own. […]

I’ve come here personally, as the leader of the world’s largest economy and the second-largest emitter, to say that the United States of America not only recognizes our role in creating this problem, we embrace our responsibility to do something about it.

I believe, in the words of Dr. Martin Luther King, Jr., that there is such a thing as being too late. And when it comes to climate change, that hour is almost upon us. But if we act here, if we act now, if we place our own short-term interests behind the air that our young people will breathe, and the food that they will eat, and the water that they will drink, and the hopes and dreams that sustain their lives, then we won’t be too late for them. 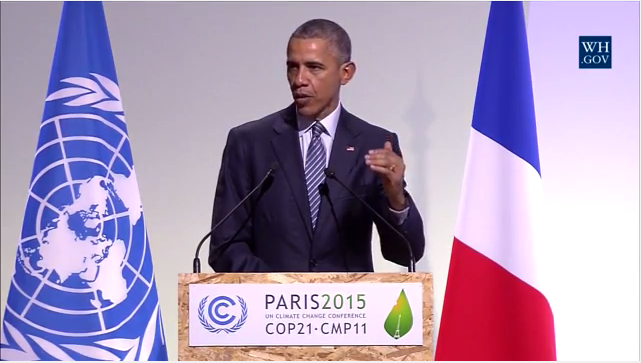