Good morning, everyone. This is a pretty exciting time for us. Four weeks since the Inauguration of a new President. Eight years ago, on this day, President Obama signed the Recovery Act, which got us down the path already for moving toward health care for all by having the electronic medical records contained in it already. He had signed SCHIP to cover many children in our country. Progress was already made on this four-week anniversary. Oh, and Lilly Ledbetter – did I mention that?

“But I didn’t want the morning to pass without acknowledging what this date meant eight years ago. It also began our path toward health care for all Americans as a right, not a privilege for the few. Inspired by so many and seeing the urgency – and captured best by Dr. Martin Luther King when he said, ‘Of all the forms of injustice, of all forms of inequality, injustice in health care is the most inhumane.’ […]

“[February 18th] will be our centerpiece day for events – town halls, real hospital visits, roundtables and many things in between. The American people are mobilizing against the Republican assault on affordable health care, but Democrats will keep fighting to ensure that health care is right of every American, while Republicans want to Make America Sick Again.

Our values are what unite us. That has always been true — and it always will be. #ProtectOurCare pic.twitter.com/pUI1Lr7acn

END_OF_DOCUMENT_TOKEN_TO_BE_REPLACED

Last week, House Democrats met at a leadership conference in Baltimore MD to discuss 2017 issues and their response to the Trump administration and the Republican majority.

(“House Democratic Caucus Chair Joe Crowley (D-NY) and Vice Chair Linda Sanchez (D-CA) spoke to reporters at the closing press conference of their caucus retreat in Baltimore. They talked about issues of party unity, their goals for the 115th Congress, and answered questions about their approach to the Trump administration. They also offered favorable reactions to a 9th Circuit Court of Appeals ruling against the Trump administration’s request to remove a stay on the executive order on immigrants and refugees. House Minority Leader Nancy Pelosi (D-CA) joined the briefing in progress and praised Reps. Crowley and Sanchez for what she called a “remarkable” issues conference for the caucus“)

I’ve said to you over and over again: we don’t unite our Caucus. Our Caucus is united by our values. What was particularly rewarding to all of us here are the values panels that our Chairman and Vice Chairwoman brought forth, speaking from the diversity of our country, from the soul of who we are as Americans – and really, not in a political way. Really, not Democrats and Republicans, but about America. 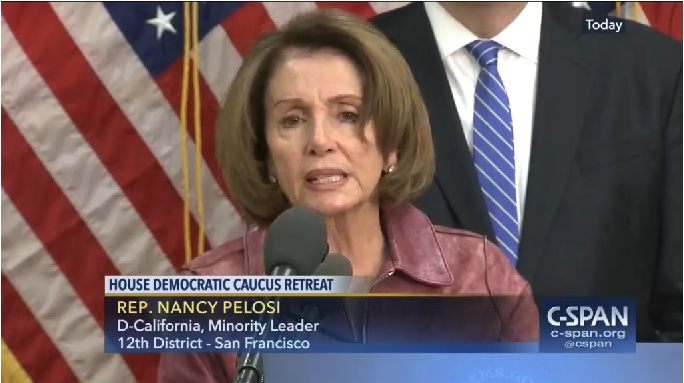 The Weekly Democratic Party Address is below …

END_OF_DOCUMENT_TOKEN_TO_BE_REPLACED

Found on the Internets – Nancy Pelosi’s Townhall on CNN

House Democratic Leader Nancy Pelosi spoke with concerned Americans and offered solutions on behalf of House Democrats at a Live CNN Town Hall moderated by Jake Tapper. During the event, she discussed the urgency of protecting health care for millions of Americans, combatting President Trump’s hateful Muslim and refugee ban, the importance of sanctuary cities and empowering women to stay engaged despite Republican attacks on women’s health and reproductive freedoms.

“If you detect some impatience in my voice, it’s because your family is suffering and our president is reckless, reckless, and his administration is incompetent,” Pelosi (D-Calif.) said, answering a question from a Yemeni refugee about Trump’s controversial immigration order.”

Pelosi divulged additional details about her meeting with Trump and other congressional leaders last week during which the president insisted he was robbed of the popular vote due to widespread voter fraud.

The California Democrat spoke up during the meeting, telling the president his widely debunked claim just wasn’t true. Trump’s response, according to Pelosi’s retelling the episode on CNN: “And I’m not even counting California.”

“You’re the president of the United States and you’re so insecure. This isn’t even true, it’s like the size of your inauguration,” Pelosi said.”

END_OF_DOCUMENT_TOKEN_TO_BE_REPLACED

Democratic Leader Nancy Pelosi released the following statement today after President Trump signed orders to make it more difficult for families, including refugees, to enter the United States based on their religion or religious heritage:

“As the Statue of Liberty holds her torch of welcome high, there are tears in her eyes as she sees how low this Administration has stooped in its callousness toward mothers and children escaping war-torn Syria. This Administration has mistaken cruelty for strength and prejudice for strategy.

“As the Chairman of the U.S. Conference of Catholic Bishops’ Committee on Migration said recently of the men, women and children who seek a better life in America, ‘We remind our communities and our nation that these families have intrinsic value as children of God.’ Today’s executive actions dishonor our values and do not address the threat of terrorism. Americans of all faiths must confront and reject any attempt to target for exclusion or discrimination anyone on the basis of their religion.

“House Democrats will continue to demand strong and smart action to defeat terrorists while protecting religious freedom and defending our Constitution.” 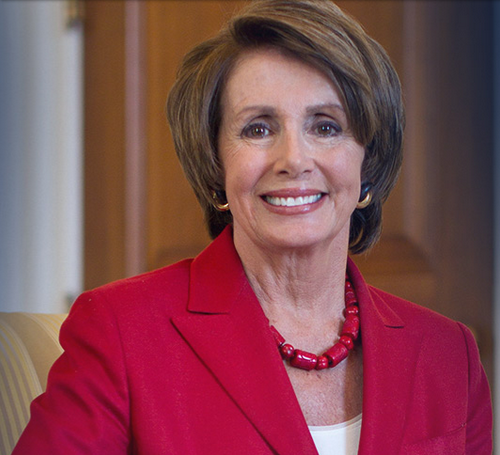 Leader Pelosi’s weekly address is below.