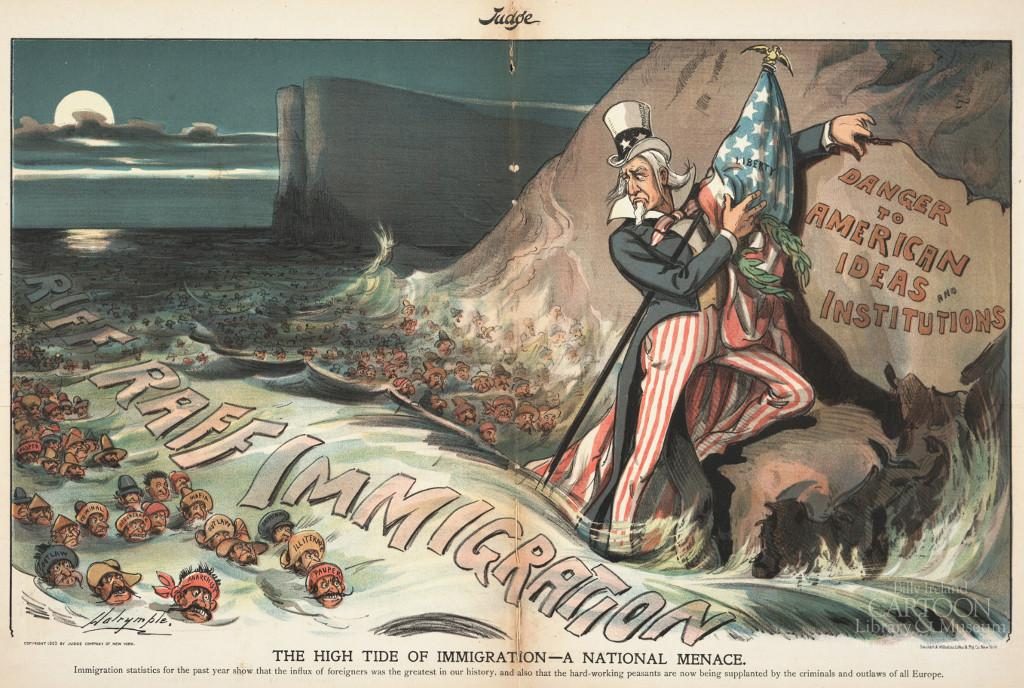 Continuing my look at our unspoken, unstudied history through historical images, this week’s topic is immigration. For those who are not solely descendents of either First Nations’ people or slaves, immigration is a shared legacy. And yet, our history shows our ongoing uneasiness with the Other, however that is defined at any given period in our history. Reactions were often harsh, mean-spirited, and without compassion, and defined the newest wave with the ugliest of racial, religious, and ethnic stereotypes. Sound familiar?

END_OF_DOCUMENT_TOKEN_TO_BE_REPLACED

In this new ad campaign video, we hear the hateful anti-immigrant rhetoric of Donald Trump, overlaid with visuals of the faces of Latinos in the United States, including former astronaut José M. Hernández, who is a first generation American. His parents are from Michoacán, Mexico.

The NADC’s mission is to increase the naturalization rate, and register and mobilize millions of voters, with the goal of increasing naturalization by 38 percent to 1 million in 2016. Currently, there are 8.8 million legal permanent residents who are eligible to apply for citizenship but don’t do so because they don’t have the resources—financial or other—to do so, don’t understand the process, or are scared.

The New Americans Democracy Campaign is supporting a national goal of raising the number of naturalizations next year by 38% to 1,000,000 new citizens. The NADC field will engage 750,000 immigrants and assist 98,000 with their naturalization applications. In addition the NADC will engage and assist 45,400 new Americans with their voter registrations.

If we add the 8.8 million residents who are eligible to naturalize to the 1.9 million U.S. citizen children of immigrants who are eligible to vote, and an additional 11.5 million Latino voters who do not turn out to vote, this would add a significant number of voters to the electorate. If only 20 percent of these potential voters naturalize and vote, 4.4 million Latino and immigrant voters’ voices would be heard at election time.