Yesterday, President Obama spoke to a crowd at the University of North Carolina at Chapel Hill.

If you’ve been marching for criminal justice reform, that’s great. But you know what, you better vote for a President and a Congress who actually care about disrupting the pipeline from underfunded schools to overcrowded jails. Protests aren’t enough if you’re not voting. You’ve been marching for the environment and to do something about climate change — I’ve heard you. But you better vote for the next President and Congress believing in science, and who will protect the progress we’ve made so we can leave behind a world that we’re proud of for our children.

If you want more good jobs, you want to have a higher minimum wage, you want help with respect to student loans — don’t just sit there and complain. Don’t just sit there in the barber shop and the beauty shop and watching the Tar Heels and say, you know, politics is all messed up, but what’s the score. No, no, no. You can watch the game after you vote.

And Hillary gives you a chance to advance our democracy. But you’ve got to do everything you can to make sure everybody votes — your friends, your family, your cousins, your uncle, your neighbors, your coworkers. Tell them this is the moment where America stands up for our best selves. Stand up and reject cynicism. Stand up and reject fear. 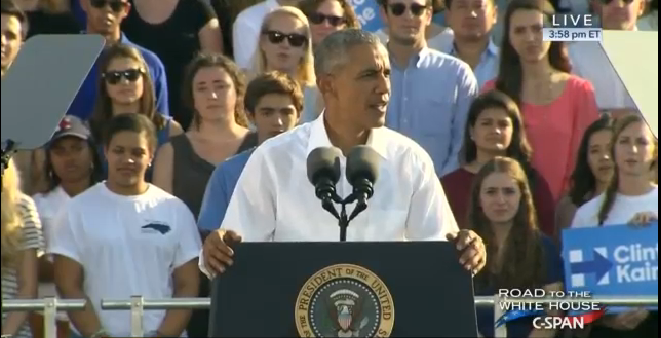 END_OF_DOCUMENT_TOKEN_TO_BE_REPLACED

On Monday afternoon, Attorney General Loretta Lynch announced the filing of a lawsuit against the State of North Carolina to block enforcement of an ordinance that violates the civil rights of state employees under Title VII, Title IX and VAWA (the Violence Against Women Act).

(Move the slider to 36:16 for the start)
(If this video becomes unlisted, CSPAN has it here)

This action is about a great deal more than just bathrooms. This is about the dignity and respect we accord our fellow citizens, and the laws that we, as a people and as a country, have enacted to protect them – indeed, to protect all of us. It’s about the founding ideals that have led this country – haltingly but inexorably – in the direction of fairness, inclusion, and equality for all Americans. This is not a time to act out of fear. This is a time to summon our national virtues of inclusivity, diversity, compassion, and open-mindedness. What we must not do – what we must never do – is turn on our neighbors, our family members, our fellow Americans, for something they cannot control, and deny what makes them human. […]

Let me also speak directly to the transgender community itself. Some of you have lived freely for decades. Others of you are still wondering how you can possibly live the lives you were born to lead. But no matter how isolated or scared you may feel today, the Department of Justice and the entire Obama Administration wants you to know that we see you; we stand with you; and we will do everything we can to protect you going forward. Please know that history is on your side. 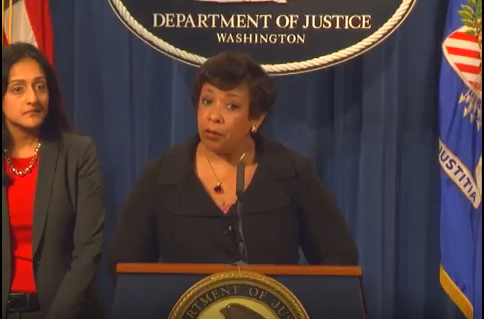 Full transcript of announcement and press conference are below.