And let’s admit it, there is clear evidence that African- Americans are disproportionately killed in police incidents compared to any other group.

And African-American men are far more likely to be stopped and searched by police, charged with crimes and sentenced to longer prison terms than white men convicted of the same offenses.

These facts tell us something is profoundly wrong. We can’t ignore that, we can’t wish it away. We have to make it right. That means end-to-end reform in our criminal justice system, not half measures, but a full commitment with real follow-through.

And the next president should make a commitment to fight for the reforms we so desperately need — holding police departments like Ferguson accountable.

Creating clear national guidelines on the use of force, especially lethal force.

Supporting independent investigations of fatal encounters with the police.

So, I pledge to you, I will start taking action on day one and every day after that until we get this done.

And you know what? When the 24-hour news cycle moves on, I won’t.

This is too important. This goes to the heart of who we are. This is about our character as Americans.

Rosa Parks opened up every seat on the bus. Our challenge now is to expand jobs so everyone can afford the fare.

And let’s ensure that the bus route reaches every neighborhood and connects every family with safe, affordable housing, good jobs and quality schools.

Now, I know none of this will surprise those of you who know me. I do have a lot of plans. You can go to my website, hillaryclinton.com, and read our full agenda. Because you see, I have this old-fashioned idea: if you’re running for president, you should say exactly what you want to do and how you will get it done.

I do sweat the specifics, because I think they matter, whether one more kid gets health care, one more person finds a job, or one more woman entrepreneur gets access to capital to follow her dream — those just may be details in Washington, but it really matters to those people and their families.

And the truth is, we need to plan how we’re going to address the complex set of economic, social and political challenges we face. They’re intersectional; they’re reinforcing. We’ve got to take them all on. We can’t wait and just do one at a time.

On bringing us together as a nation:

I’ve been saying this for a while now. I’m going to keep saying it because I think it’s important. We white Americans need to do a better job of listening when African-Americans talk about the seen and unseen barriers you face every day.

We need to recognize our privilege and practice humility rather than assume that our experiences are everyone’s experiences. We all need to try as best we can to walk in one another’s shoes, to imagine what it would be like to sit our son or daughter down and have the talk about how carefully they need to act around police because the slightest wrong move could get them hurt or even killed.

Let’s also put ourselves in the shoes of police officers, kissing their kids and spouses goodbye every day and heading off to a dangerous job that their families pray will bring them home safe at night. Empathy works both ways. We’ve got to try to see the world through their eyes, too.

When you get right down to it, that’s what makes it possible for people from every background, every race, every religion to come together as one nation. It’s what makes our country endure, and in times like these, we need a president who can help call us together, not split us apart.

I will work every single day to do just that. 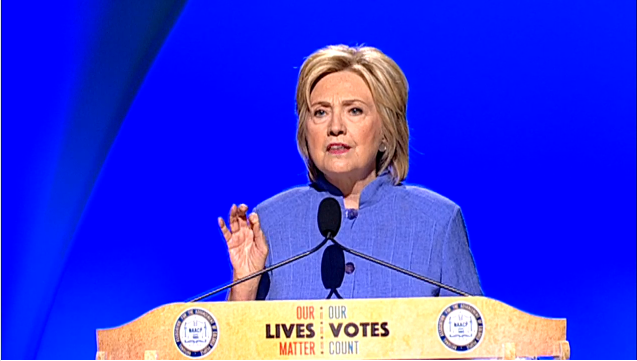 END_OF_DOCUMENT_TOKEN_TO_BE_REPLACED

It was not an ordinary stump speech – because this was no ordinary venue or audience. The Schomburg Center, a branch of the New York City Public library, sits at the corner 135th and Malcolm X in Harlem:

The Schomburg Center for Research in Black Culture is one of the world’s leading research facilities devoted to the preservation of materials on the global African and African diasporan experiences. A focal point of Harlem’s cultural life, the Center also functions as the national research library in the field, providing free access to its wide-ranging noncirculating collections. It also sponsors programs and events that illuminate and illustrate the richness of black history and culture.

Secretary Clinton spoke of her life and her service but also about the obligation that the Democratic Party, and white politicians in particular, have when asking for the African American vote:

For many white Americans, it’s tempting to believe that bigotry is largely behind us. That would leave us with a lot less work, wouldn’t it? But more than half a century after Rosa Parks sat and Dr. King marched and John Lewis bled, race still plays a significant role in determining who gets ahead in America and who gets left behind.

Now anyone — anyone — asking for your vote has a responsibility to grapple with this reality. To see things as they actually are, not just as we want them to be. […]

We Democrats have a special obligation: If we’re serious about our commitment to the poor, to those who need some help, including African Americans, if we continue to ask black people to vote for us, we cannot minimize the realities of the lives they lead or take their concerns for granted.

You know, you can’t just show up at election time and say the right things and think that’s enough. We can’t start building relationships a few weeks before a vote. We have to demonstrate a sustained commitment to building opportunity, creating prosperity, and righting wrongs. Not just every two or four years, not just when the cameras are on and people are watching, but every single day.

So here’s what I ask of you: Hold me accountable. Hold every candidate accountable. What we say matters — but what we do matters more. And you deserve leaders who will do whatever it takes to tear down all the barriers holding you back, and then replace them with those ladders of opportunities that every American deserves to have.

Ending systemic racism requires contributions from all of us — especially those of us who haven’t experienced it ourselves. White Americans need to do a better job of listening when African Americans talk about the seen and unseen barriers that you face every day. 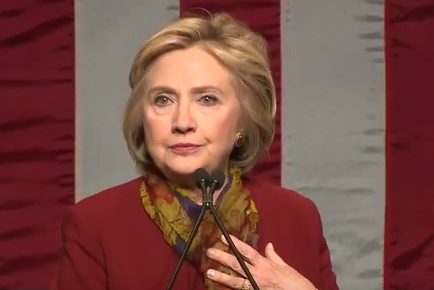 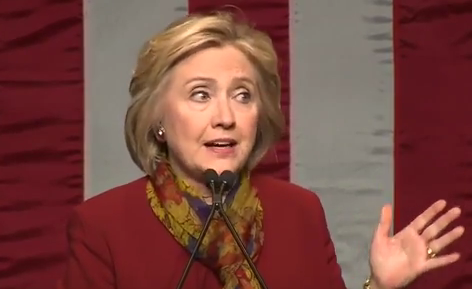 This speech is an important reminder to all Democrats that we need to not just talk the talk but walk the walk. We can’t end systemic racism until we acknowledge its existence and for white Americans that requires owning our own role in its perpetuation, fighting our own innate biases.

Let us, together, knock down the barriers and replace them with ladders of opportunity – not ladders where the bottom few rungs are removed and the struggle to gain a foothold requires a boost or an incredible act of strength and determination or just luck – but the same ladders that white Americans have as their “birthright”.

END_OF_DOCUMENT_TOKEN_TO_BE_REPLACED 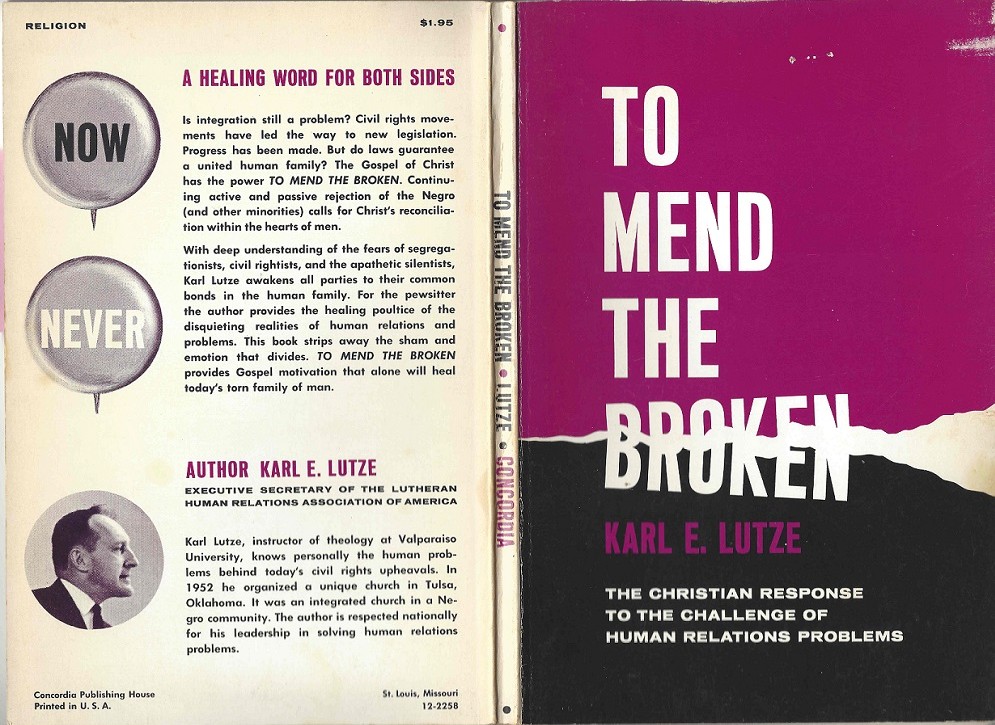 This book was written in 1966 by my step-father Karl E. Lutze. Karl began his work as a young white pastor in a poor black Lutheran church in 1945. He challenged the Christian press the year I was born, asking why there had been no book written on the role of the Christian in the human rights issues of the day. He was told to write it himself and this book – To Mend the Broken – is the result. This version has been lightly edited to only change some outdated terminology but otherwise remains an honest record of Karl’s perspective of the time.

As a lesson to anyone looking at the human relations issues we face in the current day, this volume is a priceless and concise insight into the roots of today’s world. It is presented without blame or excuse, laying out the facts of the then-current situation. It forecasts many of the struggles we face today, both simply and with an understanding of the subtleties at play. I recommend anyone looking to act or even debate about human relations issues in Twenty First Century America take the time to read this record of our very recent past.

I encourage you to reproduce this work in whole or in part. Please attribute it to Rev. Dr. Karl E. Lutze.

Karl passed away this past week, on May 7, 2015 at the age of 95, at home in Valparaiso, Indiana, surrounded by family.