Today’s post is a response to two different, but converging, prompts. First, as I mentioned in a comment yesterday, is my reading of Eric Foner’s Reconstruction Updated Edition: America’s Unfinished Revolution, 1863-1877, a massive history (that I’m less than one-third of the way through) of an era that continues to reverberate today. The second is the continuing criticism by Sen. Sanders of the Democratic Party, and the inevitable response on Twitter by Bros who continue to argue for “economics uber Alles.” The inability to recognize and address white supremacy with any coherence is an issue for more than just white supremacists; it becomes a problem for those of us who understand that the base of the Democratic Party is women and persons of color. In general, the Base (and allies) understand the problems associated with patriarchy and white supremacy, because it is our lived experience. We further understand that systems of prejudice don’t go away with a wave of the economic wand, and our history demonstrates that. The thoroughly ahistorical arguments of BoBers are troubling, but I am convinced that for some, the absence of historically-grounded awareness is a matter of ignorance, rather than malice. Today’s post is a compilation of quotes from Foner’s book (whether his own words or drawn from commenters during Reconstruction) (with a few tweets to add “color.”)

END_OF_DOCUMENT_TOKEN_TO_BE_REPLACED 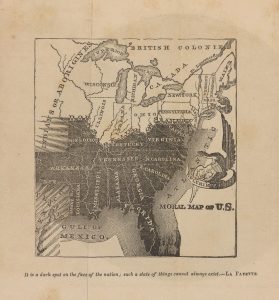 Moral Map of the U.S. (about 1847) with caption, “It is a dark spot on the face of the nation; such a state of things cannot always exist. – LaFayette