President Obama held the final scheduled press conference of his administration yesterday. He spoke of the role of the press, his plans for the future, including when he would speak out, and once again expressed his confidence in our institutions and the peaceful transfer of power.

President Obama on the role of the press:

It goes without saying that essential to [our democracy] is a free press. That is part of how this place, this country, this grand experiment in self-government has to work. It doesn’t work if we don’t have a well-informed citizenry. And you are the conduit through which they receive the information about what’s taking place in the halls of power.

So America needs you, and our democracy needs you. We need you to establish a baseline of facts and evidence that we can use as a starting point for the kind of reasoned and informed debates that ultimately lead to progress. And so my hope is, is that you will continue with the same tenacity that you showed us to do the hard work of getting to the bottom of stories and getting them right, and to push those of us in power to be the best version of ourselves. And to push this country to be the best version of itself.

On when he would break with the tradition of a president not criticizing his successor and speak out:

And for me, at least, I would put in that category, efforts to round up kids who have grown up here and for all practical purposes are American kids and send them someplace else when they love this country; they are our kids’ friends and their classmates, and are now entering into community colleges or, in some cases, serving in our military. The notion that we would just arbitrarily, or because of politics, punish those kids when they didn’t do anything wrong themselves I think would be something that would merit me speaking out.

At my core, I think we’re going to be okay. We just have to fight for it. We have to work for it, and not take it for granted.

We all hope he is right. 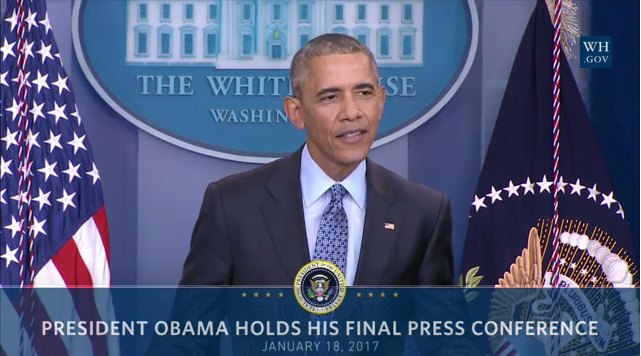