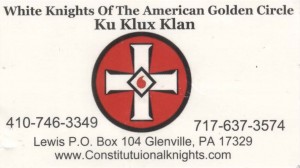 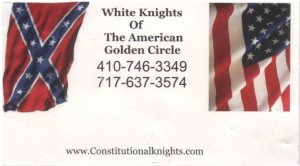 The two sides of the business card recently left at the end of our driveway.


I and my wife live on a wooded parcel set well back from a winding, two-lane country road in the rural, Northern part of Baltimore County, Maryland, the “Old Line State.” Our house is several miles south of the border with the Commonwealth of Pennsylvania. (The border is also known as the Mason-Dixon Line.)

Although we are within ~ 30 miles of the City of Baltimore’s Inner Harbor, the area is very bucolic.  This area is known as the Hereford Zone. Up here in the Hereford Zone, the electorate has a strong Republican bent. Some vehicles sport on their rear bumpers oval decals with a white background and black letters spelling HZ. These are just like the country-of-registration decals seen on cars on European roads. It’s as if the Hereford Zone were a tiny principality unto itself, like Andorra or Liechtenstein or Monaco or San Marino

Because it is South of the Mason-Dixon Line, many consider Maryland part of Dixie. However, I suspect that modern geographers generally classify Maryland

Maryland, the Old Line State, was a slave State prior to and during the Civil War. Although Maryland did not secede, many Secessionists lived in this State.

What some consider one of the first clashes of the Civil War occurred in the city of Baltimore in April of 1861.  A mob of Confederate sympathizers set upon a regiment of the Sixth Massachusetts Militia, hurling rocks and bottles. Some fired pistols. The incident became known as the Baltimore Riot of 1861.

Sad to say, such sentiments were not laid to rest with the fallen soldiers of the Civil War. 150 years later, they are still visible in the Old Line State.

One can find another example of Secessionist sympathies in the lyrics of the official (since April of 1939) State Song of the Old Line State, Maryland, My Maryland.

Believe it or not, the State Song’s lyrics read as follows:

The despot’s heel is on thy shore,
Maryland!
His torch is at thy temple door,
Maryland!
Avenge the patriotic gore
That flecked the streets of Baltimore,
And be the battle queen of yore,
Maryland! My Maryland!

Hark to an exiled son’s appeal,
Maryland!
My mother State! to thee I kneel,
Maryland!
For life and death, for woe and weal,
Thy peerless chivalry reveal,
And gird thy beauteous limbs with steel,
Maryland! My Maryland!

Thou wilt not cower in the dust,
Maryland!
Thy beaming sword shall never rust,
Maryland!
Remember Carroll’s sacred trust,
Remember Howard’s warlike thrust,-
And all thy slumberers with the just,
Maryland! My Maryland!

Come! ’tis the red dawn of the day,
Maryland!
Come with thy panoplied array,
Maryland!
With Ringgold’s spirit for the fray,
With Watson’s blood at Monterey,
With fearless Lowe and dashing May,
Maryland! My Maryland!

Dear Mother! burst the tyrant’s chain,
Maryland!
Virginia should not call in vain,
Maryland!
She meets her sisters on the plain-
“Sic semper!” ’tis the proud refrain
That baffles minions back amain,
Maryland! My Maryland!

I see the blush upon thy cheek,
Maryland!
For thou wast ever bravely meek,
Maryland!
But lo! there surges forth a shriek,
From hill to hill, from creek to creek-
Potomac calls to Chesapeake,
Maryland! My Maryland!

I hear the distant thunder-hum,
Maryland!
The Old Line’s bugle, fife, and drum,
Maryland!
She is not dead, nor deaf, nor dumb-
Huzza! she spurns the Northern scum!
She breathes! she burns! she’ll come! she’ll come!
Maryland! My Maryland!

On Thursday evening, a few weeks back, I took our trash can down to the end of our long driveway, where the driveway meets the two-lane road, so that the trash would be available for pick-up the next morning. It was twilight. After setting the trash can by the side of the road, as I was hopping back on our tractor, I noticed a white No. 10 envelope lying on the driveway, several feet in from the road. I hopped off the tractor and walked over to the envelope. It bore no markings of any kind, but there was obviously something in it. I bent down, picked up the envelope, and opened it. Inside the envelope were pieces of white gravel (probably intended to keep the envelope from blowing or washing away), and a business card. Scans of the front and back of the business card appear at the top of this diary.

As you can see, the business card is from one Lewis, apparently an official of the White Knights of the American Golden Circle, Ku Klux Klan. The business card specified a P.O. Box in Glenville, Pennsylvania (not all that far from here), and an internet address: www.Constitutuionalknights.com. (I guess that spelling is not one of Lewis’s strengths.)

I suspect that Lewis or one of the other White Knights loaded up the cab of his pickup truck with a bunch of similarly loaded envelopes, and drove down the road, pitching them out onto the various driveways he passed. I have not yet asked my neighbors whether any of them received such a delivery, but I doubt that our driveway was singled out. If one drives down the road, our driveway is nondescript other than it is long and disappears into a wooded area set back from the road. The house is not visible from the road.

The web address is invalid. Even if I correct the spelling, no web page loads.

A Google search on the phrase Constitutional Knights does reveal this:

Appalachian Soul is our marketing arm for our 5 societies Finally, our White Knights of the American Golden Circle are leaders who are looking to help spread the word of what the US Constitution and our Declaration of Independence says and more importantly, what it means Merovingian Heart includes our German and Irish brothers and sisters

I have not tried calling the telephone number printed on the business card.

It’s not a pleasant thought that, out here in such beautiful country, there are some people who harbor such ugliness within themselves. Even a small handful is too many. I bet that they are Dylan Roof supporters.