Well, at least I am honest about it!

Pope Francis spoke to a joint session of Congress this morning. 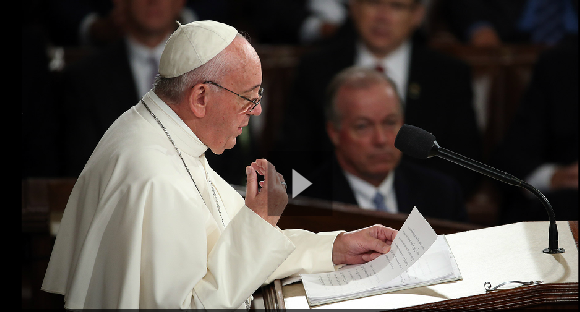 The audience included some of the justices of the Supreme Court but not the ones (Catholics Scalia, Thomas, and Alito) who won’t submit to lecturing by THIS pope in case he would dare to talk about things like corporate greed, climate change, the poors, and the death penalty. And he did!

I don’t agree with everything this pope says but I welcome his words that encourage people to join with those of us who care about people, justice, and our endangered planet.

Today I would like not only to address you, but through you the entire people of the United States. Here, together with their representatives, I would like to take this opportunity to dialogue with the many thousands of men and women who strive each day to do an honest day’s work, to bring home their daily bread, to save money and –one step at a time – to build a better life for their families. These are men and women who are not concerned simply with paying their taxes, but in their own quiet way sustain the life of society. They generate solidarity by their actions, and they create organizations which offer a helping hand to those most in need.

On religion and the dangers of fundamentalism:

All of us are quite aware of, and deeply worried by, the disturbing social and political situation of the world today. Our world is increasingly a place of violent conflict, hatred and brutal atrocities, committed even in the name of God and of religion. We know that no religion is immune from forms of individual delusion or ideological extremism. This means that we must be especially attentive to every type of fundamentalism, whether religious or of any other kind. A delicate balance is required to combat violence perpetrated in the name of a religion, an ideology or an economic system, while also safeguarding religious freedom, intellectual freedom and individual freedoms. But there is another temptation which we must especially guard against: the simplistic reductionism which sees only good or evil; or, if you will, the righteous and sinners. The contemporary world, with its open wounds which affect so many of our brothers and sisters, demands that we confront every form of polarization which would divide it into these two camps. We know that in the attempt to be freed of the enemy without, we can be tempted to feed the enemy within. To imitate the hatred and violence of tyrants and murderers is the best way to take their place. That is something which you, as a people, reject.

Our response must instead be one of hope and healing, of peace and justice. We are asked to summon the courage and the intelligence to resolve today’s many geopolitical and economic crises. Even in the developed world, the effects of unjust structures and actions are all too apparent. Our efforts must aim at restoring hope, righting wrongs, maintaining commitments, and thus promoting the well-being of individuals and of peoples. We must move forward together, as one, in a renewed spirit of fraternity and solidarity, cooperating generously for the common good.

Here I think of the political history of the United States, where democracy is deeply rooted in the mind of the American people. All political activity must serve and promote the good of the human person and be based on respect for his or her dignity. “We hold these truths to be self-evident, that all men are created equal, that they are endowed by their Creator with certain unalienable rights, that among these are life, liberty and the pursuit of happiness” (Declaration of Independence, 4 July 1776). If politics must truly be at the service of the human person, it follows that it cannot be a slave to the economy and finance. Politics is, instead, an expression of our compelling need to live as one, in order to build as one the greatest common good: that of a community which sacrifices particular interests in order to share, in justice and peace, its goods, its interests, its social life. I do not underestimate the difficulty that this involves, but I encourage you in this effort.

Here too I think of the march which Martin Luther King led from Selma to Montgomery fifty years ago as part of the campaign to fulfill his “dream” of full civil and political rights for African Americans. That dream continues to inspire us all. I am happy that America continues to be, for many, a land of “dreams”. Dreams which lead to action, to participation, to commitment. Dreams which awaken what is deepest and truest in the life of a people.

In recent centuries, millions of people came to this land to pursue their dream of building a future in freedom. We, the people of this continent, are not fearful of foreigners, because most of us were once foreigners. I say this to you as the son of immigrants, knowing that so many of you are also descended from immigrants.[…]

On this continent, too, thousands of persons are led to travel north in search of a better life for themselves and for their loved ones, in search of greater opportunities. Is this not what we want for our own children? We must not be taken aback by their numbers, but rather view them as persons, seeing their faces and listening to their stories, trying to respond as best we can to their situation. To respond in a way which is always humane, just and fraternal. We need to avoid a common temptation nowadays: to discard whatever proves troublesome. Let us remember the Golden Rule: “Do unto others as you would have them do unto you” (Mt 7:12).

This Rule points us in a clear direction. Let us treat others with the same passion and compassion with which we want to be treated. Let us seek for others the same possibilities which we seek for ourselves. Let us help others to grow, as we would like to be helped ourselves. In a word, if we want security, let us give security; if we want life, let us give life; if we want opportunities, let us provide opportunities. The yardstick we use for others will be the yardstick which time will use for us.

On abolition of the death penalty:

This conviction has led me, from the beginning of my ministry, to advocate at different levels for the global abolition of the death penalty. I am convinced that this way is the best, since every life is sacred, every human person is endowed with an inalienable dignity, and society can only benefit from the rehabilitation of those convicted of crimes. Recently my brother bishops here in the United States renewed their call for the abolition of the death penalty. Not only do I support them, but I also offer encouragement to all those who are convinced that a just and necessary punishment must never exclude the dimension of hope and the goal of rehabilitation.

I cannot fail to mention the Servant of God Dorothy Day, who founded the Catholic Worker Movement. Her social activism, her passion for justice and for the cause of the oppressed, were inspired by the Gospel, her faith, and the example of the saints.

How much progress has been made in this area in so many parts of the world! How much has been done in these first years of the third millennium to raise people out of extreme poverty! I know that you share my conviction that much more still needs to be done, and that in times of crisis and economic hardship a spirit of global solidarity must not be lost. At the same time I would encourage you to keep in mind all those people around us who are trapped in a cycle of poverty. They too need to be given hope. The fight against poverty and hunger must be fought constantly and on many fronts, especially in its causes. I know that many Americans today, as in the past, are working to deal with this problem.

It goes without saying that part of this great effort is the creation and distribution of wealth. The right use of natural resources, the proper application of technology and the harnessing of the spirit of enterprise are essential elements of an economy which seeks to be modern, inclusive and sustainable.

On the need to address man-made climate change:

In Laudato Si’, I call for a courageous and responsible effort to “redirect our steps” (ibid., 61), and to avert the most serious effects of the environmental deterioration caused by human activity. I am convinced that we can make a difference and I have no doubt that the United States – and this Congress – have an important role to play. Now is the time for courageous actions and strategies, aimed at implementing a “culture of care” (ibid., 231) and “an integrated approach to combating poverty, restoring dignity to the excluded, and at the same time protecting nature” (ibid., 139). “We have the freedom needed to limit and direct technology” (ibid., 112); “to devise intelligent ways of… developing and limiting our power” (ibid., 78); and to put technology “at the service of another type of progress, one which is healthier, more human, more social, more integral” (ibid., 112). In this regard, I am confident that America’s outstanding academic and research institutions can make a vital contribution in the years ahead.

On the despair of those caught in a culture of hopelessness:

In particular, I would like to call attention to those family members who are the most vulnerable, the young. For many of them, a future filled with countless possibilities beckons, yet so many others seem disoriented and aimless, trapped in a hopeless maze of violence, abuse and despair. Their problems are our problems. We cannot avoid them. We need to face them together, to talk about them and to seek effective solutions rather than getting bogged down in discussions. At the risk of oversimplifying, we might say that we live in a culture which pressures young people not to start a family, because they lack possibilities for the future. Yet this same culture presents others with so many options that they too are dissuaded from starting a family.

On what makes a nation great:

A nation can be considered great when it defends liberty as Lincoln did, when it fosters a culture which enables people to “dream” of full rights for all their brothers and sisters, as Martin Luther King sought to do; when it strives for justice and the cause of the oppressed, as Dorothy Day did by her tireless work, the fruit of a faith which becomes dialogue and sows peace in the contemplative style of Thomas Merton.

In these remarks I have sought to present some of the richness of your cultural heritage, of the spirit of the American people. It is my desire that this spirit continue to develop and grow, so that as many young people as possible can inherit and dwell in a land which has inspired so many people to dream.

Bolding also added to further highlight the things that I care about!!