UPDATED with Transcript from WaPo:
The CNN Democratic debate transcript, annotated
(“annotated” means that they have added ‘fact checking’ and additional information in pop up links)

The stage has been set and these are the candidates:

One thing is clear: running against the policies of President Obama is not likely to be a path to success in the Democratic Party primaries. From Pew Polls:

Democrats have remained very loyal to President Barack Obama.
In our September poll, Obama’s overall job rating is 46%, but Democrats are overwhelmingly supportive of the president. Fully 83% of Democrats approve of the way Obama is handling his job, compared with 43% of independents and just 9% of Republicans.

Democratic voters want the next president to continue Obama’s policies.
In our most recent survey, 61% of possible Democratic primary voters said they would be more likely to vote for a presidential candidate who offers programs similar to the Obama administration. 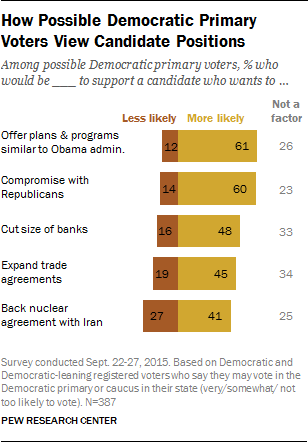 Commentary from news outlets below the fold …

Hillary Clinton and Bernie Sanders will face off for the first time on stage Tuesday night, along with fellow Democratic candidates Lincoln Chafee, Martin O’Malley and Jim Webb.

Both Clinton and Sanders have said they are running positive campaigns, but if their previous debate experience is any indication, that could change on debate night. In the past, both have shown a willingness to turn tough on their opponents.

Both Vermont independent Sen. Bernie Sanders and former Maryland Gov. Martin O’Malley are turning up the contrast between themselves and the party’s front-runner, who, despite having faced heavy scrutiny all summer for her email use as secretary of state, appears to have stabilized her dominance in national polls.

In a not-so-subtle jab at Clinton, Sanders highlighted his “consistency” Sunday on NBC’s “Meet the Press,” saying he’s been in sync with the party’s electorate on issues like trade and income inequality much longer than the former secretary of state.

“So people will have to contrast my consistency and my willingness to stand up to Wall Street and corporations, big corporations, with the secretary,” Sanders said.

And O’Malley played up his record on issues like gun control and immigration on CNN’s “State of the Union,” saying that “it’s about the doing, not the saying.”

From Vox: The 6 biggest policy differences between Bernie Sanders and Hillary Clinton

[While] Clinton and Sanders may be using somewhat similar rhetoric these days, the differences between them on economics remain vast. Sanders wants his party to challenge the power of the wealthy and corporations far more directly, both rhetorically and substantively. But Clinton would rather turn them into allies — mobilizing support from the 1 percent, rather than demonizing them.

Now, keep in mind that despite the current turmoil in the House of Representatives, it’s generally expected to remain in Republican hands for quite some time — so when it comes to actual legislation, a Democratic president’s strategic approach to Congress and executive power might actually matter more than which specific new laws he or she wants.

But on some issues, like trade and foreign policy, the president has broad authority to take the initiative. And it’s clear that there, President Sanders and Clinton would act in very different ways.

From Reuters: Clinton’s tack to the left to be on display in Democratic debate

After two raucous Republican debates that drew big television audiences attracted by the fireworks generated by front-runner Donald Trump, the Democratic encounter, hosted by CNN and to be held in Las Vegas, is likely to be a tamer affair.[…]

Sanders, a self-described socialist, has excited the party’s left wing and generated big crowds with a persistent message of eradicating income inequality and reining in Wall Street.

In response, Clinton took stances on several key issues recently that align her with Sanders. She reversed course to announce her opposition to the 12-nation Trans-Pacific Partnership trade deal that she had praised when she was secretary of state, and she rejected the Keystone XL pipeline that she had said in 2010 she was inclined to approve. Sanders is a longtime opponent of both projects.

Sanders, who has repeatedly refused to directly attack Clinton, signaled over the weekend he would make an issue in the debate of Clinton’s tardiness on some of those topics, noting he opposed Keystone and the TPP “from day one.”

The last two presidential debates have basically been exercises in outrage for progressives. Save for the moment Carly Fiorina smacked down Donald Trump’s sexism, the Republican events were the stuff of liberal nightmares — defenses of the Iraq War, expressions of admiration for Kim Davis, a botched discussion of climate change, and silence on racial injustice.