Black, beautiful, and wild described Pombagira Rodriguez. Her promiscuous nature would have doomed her to perpetual pregnancy if it hadn’t been for a certain medical procedure a year ago; as it was, she was known for staying out all night and then gaining access to the house by climbing a tree and entering through a partly open window.

“She’s a second-story cat,” Celine Rodriguez would say with a sigh. “What a naughty girl!”

“You treat that cat as if she were your child,” people would say from time to time. “What a pity you never had children of your own.”

“I teach, I blog, I write. I have brain-children, and I labor just as hard bringing them into the world as women who give birth to physical children,” Celine would reply. She was referring to intensity of effort, not physical discomfort, although she did sometimes have to retire to her bed with headaches.

Happily, Pombagira and the dogs, Joel Collie and Eleanor Labrador, were available for the cuddles that books, posts, and lectures couldn’t supply.

Five minutes before the knock sounded on the front door, Celine gazed out the window at the rain blowing through the front yard. “Remind me again why we got married in October?”

“Because we got a fifty percent discount on a last-minute deal for a cruise to the Bahamas,” Eduardo reminded her. “We decided to make that our honeymoon. Stop worrying—the weather forecast says the rain will stop at six o’clock. We can still go out to dinner to celebrate our anniversary.”

“And that will be the only good thing about this gloomy fall Saturday,” Celine said.

But she was wrong, because the knock on the front door turned out to be the United Parcel Service delivering a package addressed to her and Eduardo.

“It’s from my sister priestess Serafina,” Celine said. “How nice of her!”

“You open it, dear,” Eduardo said, handing her the box cutter. “Knowing her, it could be anything.”

Eagerly Celine undid the wrappings, slit open the seams of the box, opened it, and gasped in delight. 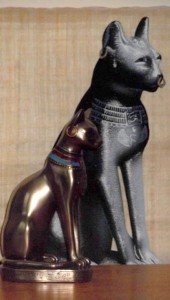 She picked up the statuette and examined it. “She’ll look wonderful on the altar to the ancestors.”

“And who’s Bastet when she’s at home?” Eduardo inquired.

“Bastet is the cat form of the Goddess Bast,” Celine said, slipping into the lecture mode she loved. “In ancient Egypt, cats were so revered that no one could own one except Pharaoh. If a cat came to your house and stayed, you were fortunate indeed.”

“Why?” Eduardo asked, coming up for a closer look at the statuette.

“Because Bastet guarded the household. Her earthly representative, the domestic cat, killed cobras that slithered into the house. Cats also ate the rodents who threatened the grain crop. In Roman times ancient Egypt was regarded as the breadbasket of the world, you know, because of the wheat it produced.”

“Yep. And woe betide anyone who harmed a cat! That person could be put to death. But when the household guardian died of natural causes, the human family had to shave off their eyebrows as a sign of mourning.”

“You said Bastet was the cat form. Was the Goddess Bast in human form, then?”

“Yes, she was,” Celine said, “except for her head, which was the head of a cat. She was the Goddess of music, sensuality, and dancing. The sistrum was her special musical instrument. I wondered what it sounded like? I’ll Google it.”

After consulting the search engine she closed her laptop and said, “It sounded like a rattle. The temple of Bast in her city of Bubastis must have been full of music. Okay, I’m going to put Her on the altar now.”

Pombagira changed after the coming of Bastet. She still spent a great deal of time outdoors but when she leapt lightly through the upstairs window on her return, as often as not she would be carrying something in her teeth—usually a field mouse, but once or twice a late-lingering cricket, and once, to Celine’s displeasure, a small bird.

These offerings she would lay at the base of the statuette. Celine removed them when she saw them but as her teaching schedule at the university kept her away from home during the day, the offerings often remained for hours. Pombagira would sit on the floor, gazing up at Bastet with unwinking green eyes.

“It’s as if Pombagira is worshipping her,” Celine told Eduardo. “She sits there for an hour altogether, just staring.”

Eduardo, who did not share his wife’s Pagan beliefs, snorted. “She’s a cat, Celine.”

“And cats are naturally Pagan,” Celine said. “I think Bastet is aware of how Pombagira feels about Her.”

On the morning of October thirty-first, Celine gave Pombagira a talking-to before she departed for the university. “Pom, remember this is a dangerous day for black cats. Do not go out at all, do you understand me? There are those who think black cats are Witches’ familiars and want to harm them.”

Pombagira twitched her tail in displeasure. Stay indoors when a perfect October day was unfolding outside? She could already see that it was a fine morning with just a hint of chill, perfect for hunting.

“And just to make sure,” Celine continued, “I’ve shut and locked the upstairs window you use to come in.”

Pombagira yawned rudely. She knew, as her human evidently did not, that the laundry room window was slightly open. Not a great deal, to be sure, but enough to permit the passage of a slim, active cat.

“See you later, kids,” Celine said to Joel and Eleanor as she picked up handbag, briefcase, and car keys and left the house.

Hours later, after teaching three classes and attending a faculty meeting, Celine got into her car to drive home. For some reason she felt slightly uneasy: like most women, she relied on her intuition to tell her when something wasn’t quite right. In people of color, like herself, the intuition practically amounted to an alarm system.

It really was a beautiful day, she thought as she turned the corner into her street. And so peaceful, except for—

—Dear Goddess! There was a group of schoolboys chasing a cat, and the cat looked exactly like Pombagira.

“Hey, gotcha, you black cat!” one boy shouted as he threw a rock at the animal.

“Evil Witch cat! We’ll skin you alive!” taunted another boy as he in turn drew back to throw a rock.

The cat, looking very small and defenseless, was backed up against the wall of a house: the four boys, evidently scenting victory, drew closer. Aghast, Celine stopped the car, jumped out, and rushed toward them. As she approached the sunny day suddenly darkened. Was there a cloud passing? Celine looked up.

Fear paralyzed her as she realized the darkness was caused by an enormous black shadow, the shadow of a giant cat. A sudden wind swept through the air, rattling the leaves on the trees, tearing the rocks from the boys’ hands, knocking over trashcans. The apparition loomed menacingly toward the boys and opened its mouth, baring its sharp teeth in a snarl; the boys yelled in terror as they turned and ran.

Celine sank to her knees and held out her arms. “Pombagira!”

Pombagira, still trembling, leapt into her arms. Celine carried her to the car, got back in, and drove up the street to her house.

Still shaken by what she’d witnessed, Celine dumped her bags in the hallway as Joel and Eleanor rushed to greet her, barking excitedly. They’d heard the commotion outside. Pombagira jumped out of Celine’s arms and fled to the living room. Celine peeped in to see the cat staring up at the statuette of Bastet on the altar. A thought occurred to her, so she went to the dining room, grabbed the chrysanthemums out of the bowl on the table, and returned to the living room. She laid the flowers in front of Bastet.

Pombagira came to sit beside her and for a time there was silence. “Thank you, Bastet,” Celine said after a few minutes. “Thank you for saving Pombagira.”

As she gazed at the statuette, Celine fancied that somewhere in the distance she could hear the rattle of a sistrum. She looked down into Pombagira’s green eyes and smiled.