My husband and I aren’t getting any younger. In fact, looking at us, you’d say we’re downright old. It’s taken me two years to accept that at 72, I’m no longer “middle-aged”: now I qualify as elderly.

Last year I began to think about what we’d do when we’re too old to drive. In suburban America, you either have access to your own transportation or you languish. We visit the public library, gym, grocery store, bank, gas station, doctor, dentist, Target, Costco. We pick up grandchildren from elementary school (on foot, if it’s nice weather), or from day care, which requires driving.

In August we accepted an invitation to tour a continuing care retirement community I’ll call Gatsby Woods. (In fact, I’ve changed the name of every such community mentioned in this post.) Situated in a neighboring county, it occupies a very large parcel of land and from a distance, looks rather bleak—a collection of buildings rising from a flat landscape.

However, up close, it looks quite different. The campus itself is beautifully landscaped with trees, flowers, grass, and walking paths. The buildings are all low-rise, reaching only four stories high, connected to each other by enclosed walkways. In driving rain, falling snow, or searing summer sunlight, one need never venture outside.

The main “club house” offers a swimming pool, exercise room (with trainers on staff), a small but well-appointed auditorium for concerts, a hairdresser, a spa, a small general store where one can buy birthday cards, fruit, and vegetables, a nice restaurant, and a delicatessen. There’s even a pub and a “casual dining” restaurant in one of the other buildings. Each day a shuttle bus conveys the residents to a different shopping center. Excursions are offered to interesting places off-site and lectures are offered on site. The residents can even grow flowers and vegetables in garden plots set aside for that purpose.

The apartments, which range from one bedroom to three bedrooms, offer their own laundry machines and updated appliances.

Well, guess who fell in love instantly and wanted to move there! So we joined The List and set about finding an apartment. We were offered a lovely one, so we put our house on the market. We are the original owners of the house we bought in 1976 and have lived here since we bought it.

Gatsby Woods sent a packer to help us downsize and pack, and we hired one of the realtors they recommended. The realtors were a married couple, very nice, who told us we would have to make certain updates.

We spent thousands of dollars doing just that. It wasn’t only a matter of painting the walls an icky “neutral” color. We had to hire people to cart off half the furniture (which broke my heart), and half the books and paintings. Not only that, we had to rescreen the porch, spend hundreds on flowers for the front flowerbeds, replace the front door, and have a doorway cut from the dining room to the garage. It was traumatic. I didn’t mind parting with the hardback best sellers, but I minded very much parting with the other books. It felt as if someone were sawing off my limbs one by one.

At last, in October, the house was ready to show. We had to vacate the premises of course, when potential customers arrived, although the realtors were very good about letting us know well ahead of time. They also did a nice job of staging the house.

All to no avail: during the month our house was on the market, not a single offer did we receive. Worse, after the realtors urged us to drop the price, we realized that after everything was subtracted, we wouldn’t have enough left to buy a place at Gatsby Woods even if we did sell it.

We were distraught at the feedback from potential buyers. “The hardwood floors don’t match,” they whined. Huh? I never noticed. To me, a hardwood floor is a surface which, if the dog pees on it, can be cleaned far more easily than carpet can. Who cares if it’s a different hardwood on each level? Crushed, we decided to take the house off the market and wait.

Okay. Admittedly, we kinda got hooked on the way the place looked. Not with the ick-colored paint the realtors chose to cover the walls, but with the lack of clutter and the empty bookshelves. Even now, six months later, we haven’t rehung the pictures or put the books back.

In the spring when Snowzilla melted and we could once more venture out, we looked at a place down the parkway from us, called Hartnett Hall. The sales director who invited us to tour the place was very nice, but the one building, although not a high-rise, turned us off. It sat smack in the middle of a neighborhood. There were no grounds where we could sit of an evening, no walking trails for us, nowhere we could walk the dog. It didn’t help that it was a dark day pouring with rain when we visited. Whereas at Gatsby Woods, there were people walking outside with dogs, or sitting inside drinking coffee and chatting, here there were almost no residents visible apart from one old man sitting gloomily in a corner and a group of three women in the cafeteria. It was dark inside, and the apartment we saw was extremely small.

After we left, we looked at each other as we drove off through the rain. “No #$&! way.”

I should mention that at Hartnett Hall there was no “buy-in” for an apartment, but the monthly fee was enormous: $5,000 per month! That would be enough to bring on a heart attack in itself. No wonder they had a vacancy.

No “buy-in” fee was required at the next place we looked at, the Landings, down the road from us. It’s still being built, actually, with the first apartments to be ready in June. At a luncheon given by the sales team, we viewed the apartment floor plans in a slideshow presentation and they seemed quite nice. Again, however, the buildings, although still only four stories high, sit right on an extremely busy road with no surrounding campus of grounds. There would be nowhere for us to walk, nowhere for the dog. The buildings aren’t connected either. Although not as luxurious as Gatsby Woods, the monthly service fee as as high as that for Hartnett Hall.

Still with me? Wait until you hear about the next one!

At a nice luncheon and presentation by The Windrush Group, which emphasizes aging in one’s own home but with a package of monthly services, we absorbed the following facts: depending on the level of “plan” we chose, we could pay more than $100,000 (the older you are, the more you pay) to stay in the house we already own, plus a monthly fee of $400 or $500. The monthly fee covers services: for example, if you need a plumber, your case manager will call a plumber. You get to pay the plumber. If you need transportation to the doctor’s office, the case manager will call a taxi for you. You pay for the taxi.

After we smiled and said goodbye, we walked to our car. “No #$&! way,” I said to Dearly Beloved, who harrumphed and agreed.

But that’s nothing like what happened next. It so happens that Dearly Beloved, during his career with the airlines, met a very nice flight attendant who was also a trained nurse. (Few airline personnel, we learned, have just one job. Most have a couple.) She gave Dearly her card and mentioned she was starting a home health care service. We thought we would see what she had to offer, so we set up an appointment.

She came to our house one morning, unfortunately a couple of hours early so my husband wasn’t home from his errand yet. Nurse wanted to see the house, so I showed her around. She noted the number of bedrooms, the number of bathrooms (“The bathtub could be converted to a walk-in bath”), and mentioned the downstairs family room could be partitioned into two bedrooms.

My husband having returned by that time, we sat at the dining room table to discuss what she had to offer. We told her what we’d been through with Gatsby Woods and I think the poor dear inferred from the story that we are badly off financially (which is not the case). She said in Germany a new concept was taking hold, that of a group home for the elderly. “You could install a wheelchair ramp in front of the entry door,” she said enthusiastically, “and chair lifts inside.” (We have a split-level house with few stairs.) She said several people could live in our house and pay monthly rent. “That would give you an income,” she assured us. A rota of nurses or home health aides would be present 24/7 to supply the needs of the residents. When I protested feebly that our single-family house isn’t zoned for such a facility, she said we could apply for a permit.

After she left, I looked at Dearly Beloved and said, “No #$&! way.” I could just visualize our younger son trying to sell our house after we pop our clogs, and having potential buyers cavil at the wheelchair ramps, altered bathtub, and chair lifts!

So, to summarize, we have decided to stay where we are, keep calm, and carry on. At 85, Dearly Beloved still mows the huge fenced backyard on his tractor; between mowings, Monty Beagle still romps through it, sniffing all the fascinating smells. Dearly takes the dog for his walks, picks up grandchildren from school or day care as required, runs errands in his pickup truck (even helps friends move furniture), visits the doctor, and does the dinner dishes. He doesn’t care that we can’t move to Gatsby: he hates being around old people. At the moment, two of our grandchildren live around the corner with their parents, so he likes that, and there are plenty of children and younger people living on our street.

The thing is, although we’re elderly, we’re far from decrepit. I’ve just undertaken a rigorous 10-week training course at my gym, and from age 65 to 71 I took care of two grandchildren, full time, from infancy through toddlerhood.

As for moi, I’m resigned to the fact that we won’t be able to afford Gatsby Woods and that I will Still Have to Cook. Not cooking dinner was the aspect of moving there that delighted me the most, because after 50 years in the kitchen I’m really, really tired of it.

However, there’s an organization called Blue Apron (https://www.blueapron.com) that will deliver healthful gourmet meals to us, should that become necessary. Moreover, an organization in the next jurisdiction will give us rides to the doctor or wherever in exchange for useful services that we ourselves can provide (in my case editing, as that was my former job). Our grocery store has a home delivery service. A very good hospital is just down the road to provide care, and our health management organization is nearby. We’ve hired a gardener to mow the front yard and weed-whack front and back, and the new cleaning service charges the same amount for twice-monthly cleanings as the old one did for once-a-month cleanings.

But if we win the lottery, I’m moving to Gatsby Woods the next day, even if Dearly and the dog elect to stay! 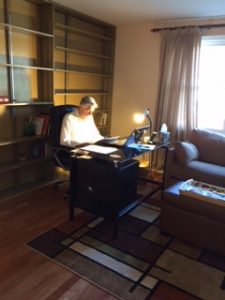 Dearly Beloved in his uncluttered office