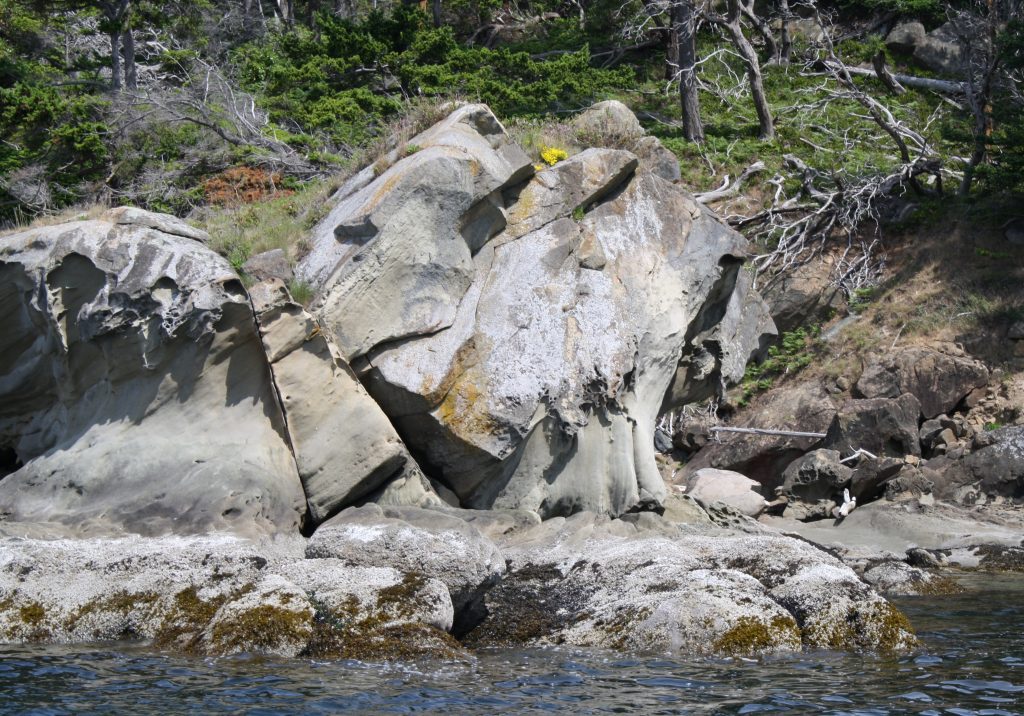 Sandstone Formation in Chuckanut Bay at the foot of Chuckanut Mountain

In stark contrast to the mountainous Pacific Northwest of today, during the Eocene epoch (~ 55 ~ 34 Million Years Ago (MYA) it was quite flat.  However just as today, the region then was lush with vegetation and interlaced with braided streams meandering from what is now Eastern Washington on to the Pacific Ocean. This was a tropical swamp with exotic plants and animals (although some would be familiar yet today).  As the streams approached the ocean, they slowed and their sediments of sand, clay, and silt carried from huge rock formations to the east, settled out. Over millions of years these sediments accumulated, were compressed by gravity and tectonic forces, and solidified into immense geologic rock formations. This bucket is about one of these structures – the Chuckanut Formation made up primarily of sandstone, siltstone,  conglomerate, and shale, with pockets of coal from the ancient compressed vegetation.

I have referred to this formation in three previous diaries that were focused on various aspects of it including its Eocene fauna and flora, and more recently, graffiti  sprayed on the rock formations along its beaches. Here I want to focus on the formation itself and all it has afforded our region.

This formation is not only in my backyard, it is under it as well. These sedimentary deposits extend to depths of nearly 20,000 feet in places. My focus here is on the Chuckanut Mountains which comprise 10 separate but related mountains (and hills) in and around Whatcom and Skagit Counties in northwest WA. In particular, I will focus mainly on Chuckanut Mountain itself (for which the formation was named) and a bit on Sehome Hill which is most directly in my back yard. In addition segments of this and related sedimentary formations are spread across the northwest, including the San Juan Islands and up into British Columbia.

This diary threatened to get too long so I decided to do it in two parts. This is Part I.

What’s a Chuckanut? Although most agree that the name is derived from one of the local native languages, there are several interpretations for what “Chuckanut”, means.  I will go with the one from the US Geological Survey: “Long beach far from a narrow entrance.” Beyond that I do not know where the narrow entrance is.

Consisting of sedimentary deposits, these mountains would be expected to show numerous layers of the ages, accumulated over millions of years. And of course they do. Many of these layers now are tilted and folded indicating that they were subjected to tectonic and various geologic forces emanating from several faults in the area. This formation is thought to have been folded about 40 mya, toward the end of the eocene epoch. So now these sedimentary remnants are hills and mountains, nestled as foothills of the Cascade range as well as being dispersed throughout local islands in the Salish Sea.

The sculpting process and creation of honeycombs called “Tafoni” 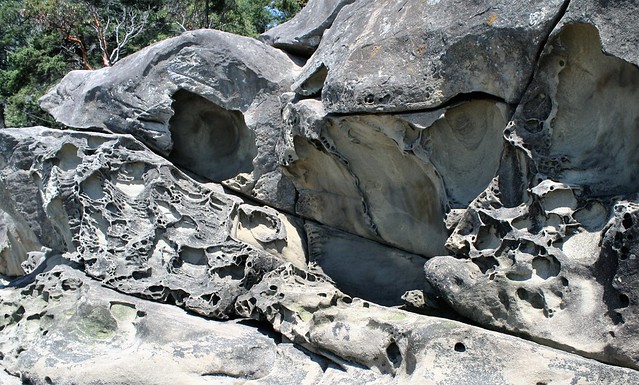 What causes these tafoni cavities in the sandstone?
The term “Tafoni” appears to originate from Greek and/or Latin with meanings variously of “tomb,” “window” or like openings.
The erosive processes that creates these interesting tafoni are the result of weathering processes followed by erosion. Weathering involves various physical and chemical processes by which sand sized rock clasts and minerals that make up the rock, are loosened such as freeze — thaw cycles that expand spaces between grains, and blowing sand or sediments from water pounding on the rock.  Chemical processes too contribute such as water and carbon dioxide that weaken the mineral bonds holding rocks together.
Erosion then is the process that actually removes the weakened and loosened clasts including water pressure, wind, and the ever present gravity. Recall, these are typically on slanted or vertical surfaces. Weathering and erosion account for the loss of grains and the eating away of the rocks. However, the honeycomb form consists of eroded cavities with non-eroded walls (septa) that separate the holes. What appears to account for septa not eroding is that algae are present that protect the rock from the weathering processes. Surfaces without algae are eroded and leave the holes.
Note in the photos below that lighter, sand-colored surfaces are eroding whereas the darker, algae covered portions are not eroding. Also note that there are patches of lichen scattered around that also provide protection from weathering. 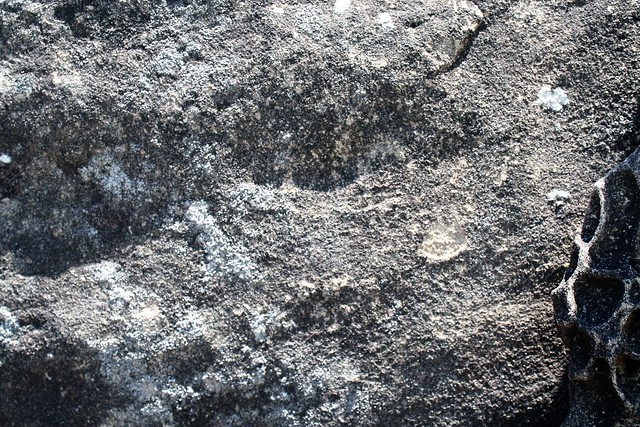 In addition to the tafoni, these same processes can work to form other designs such as mushroom-like formations with algae on top and the base being eroded. 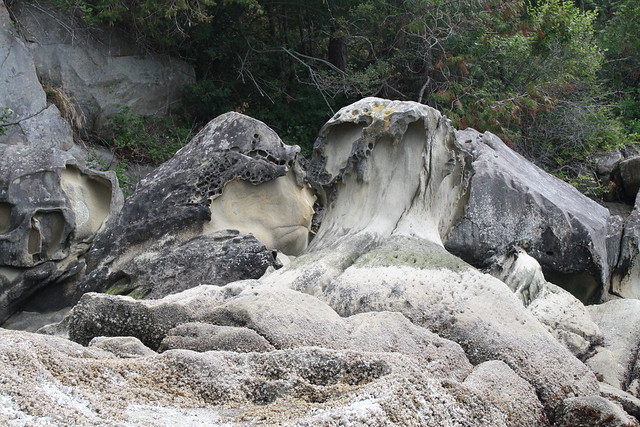 Mushroom-like version with top preserved and stem eroding
These and many other patterns are found along the chuckanut formation components including the sandstone portions of the San Juan Islands, particularly those exposed directly to salt water.

Part II of this chuckanut venture will examine fossils from the eocene swamps impressed in the sedimentary stone, the use of these stones in early building in the West, and the magnificent recreational opportunities and views that the raised and folded formation provides its residents and visitors.