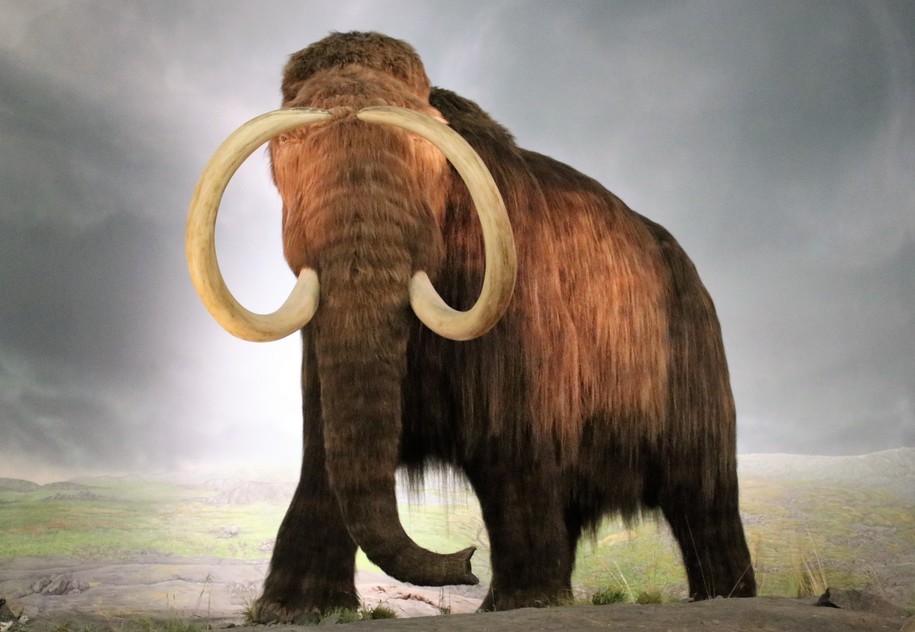 Along with elephants, mammoths were the most recent species in the sizable family tree of Proboscideans (see below). Mammoths being extinct today, we have left three species of elephants, two of which are in Africa, – Loxodonta africana from the Savanna/bush, and L. cyclotis from the forest. The third specie is the Asian elephant — Elephas maximus, the progenitor from which the mammoth most directly evolved. In addition there are several subspecies of E. maximus.

Ancient ancestors of the Mammoths and elephants roamed the world (except Australia and Antarctica) since the late Paleocene Epoch (61 to 54.8 million years ago). However, their roots go much deeper (see the figure below)

There are today 165 fossil or living species or subspecies of Proboscideans, the earliest of which is thought to have been amphibian and aquatic, including to Sirenia (dugongs and manatees) that are found genetically to be the closest living relatives of elephants. 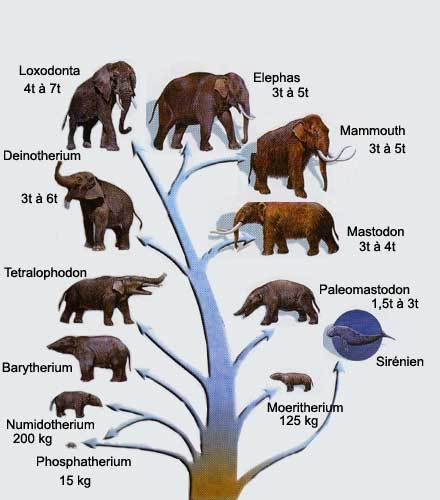 The exhibit included several model depictions of early proboscideans including the ~ 35 MYO  hippo-like  Moeritherium from north Africa (lower right on the tree.)  The Moeritheruum, was not obviously mammoth-like, but had large incisor teeth that were proto-tusks and a soft snout that was the beginning of the line of trunks. 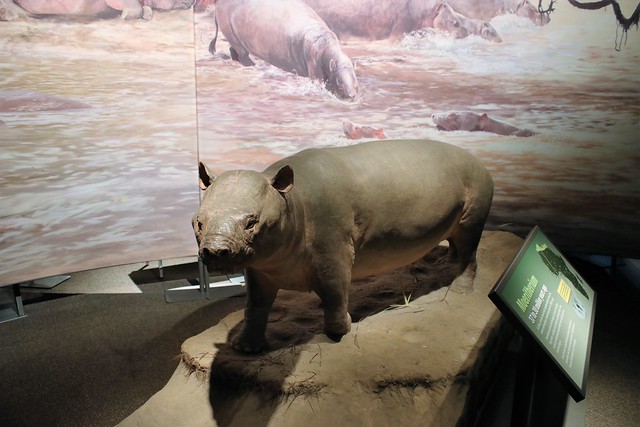 The Deinotherium, is a more recent ancestor (25 to 2 MYA) and had more of a trunk along with protruding incisors that were clearly identifiable as downward pointed tusks. (Further up the tree on the left.) 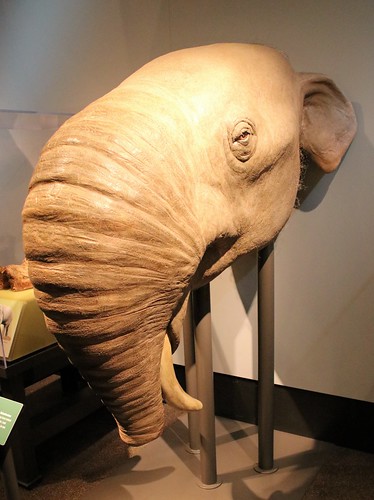 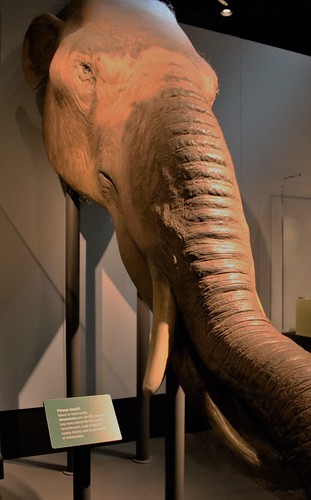 Amebelodon with a long trunk and four tusks was called a “shovel-tusker.” Its long lower incisors were flat like a shovel. 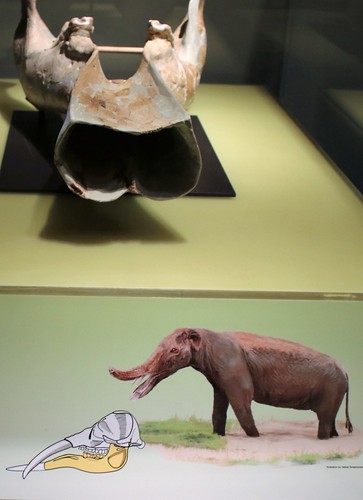 Smaller than mammoths, mastodon’s ancestors  diverged millions of years ago from the lineage that would become mammoths and elephants. Their predecessors evolved about 2 MYA and they initially ranged over Europe and North America. However the European mastodons died out long before those in North American that survived into the late Pleistocene (~10,000 YA). 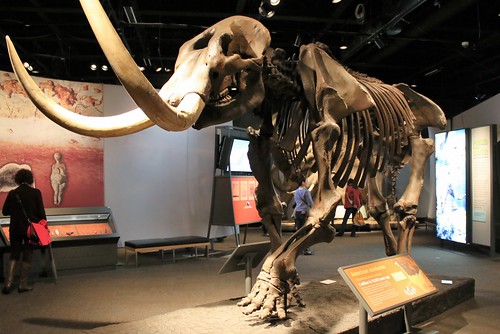 Following the long evolution of the proboscideans, mammoths appeared about 1.6 MYA.  There were two species – the Woolly mammoth, (Mammuthus primigenius), and the Columbian (Mammathus columbi). Both roamed North America, Siberia, and northern Eurasia until about 10,000 YA with an exception noted below. The Woollys kept further to the north while the Columbians ranged more southerly. These behemoths stood at least 14 feet high. 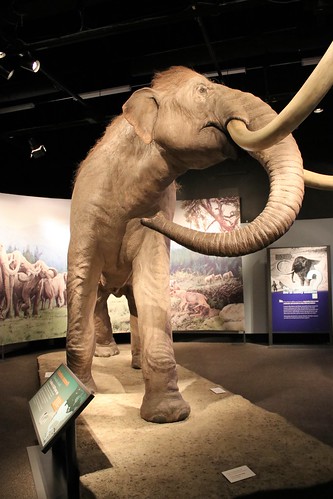 Woolly mammoths were about the same size as modern African elephants, but were covered in thick brown hair and had enormous tusks. 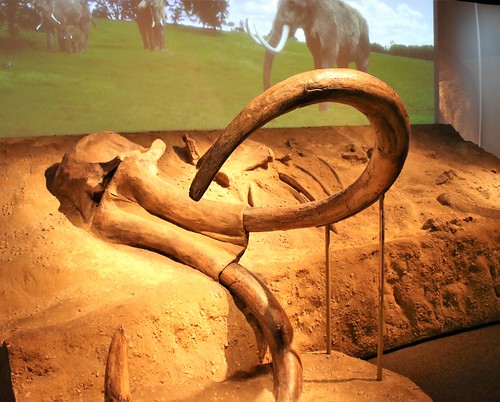 The woolly mammoth is notable in that its most recently dated survivor lived on Wrangel Island (Russia, Chukchi sea) as recently as 4,300 years ago, whereas most populations were extinct by about 10,00 YA. Wrangel Island separated from the Russian mainland about 12,000 years ago by rising sea levels, trapping a group of mammoths along with it. With a warming climate and/or human predators, their fate was sealed.

Numerous ice ages occurred over the past thousands of years and with them came lowering and then rising seas that created islands on which populations of mammoths became isolated. With less available food in the restricted range, smaller mammoths had an advantage that ultimately resulted in the evolution of Pygmy mammoths. One such population has been extensively excavated in the Channel Islands off the California coast, particularly Santa Rosa Island. 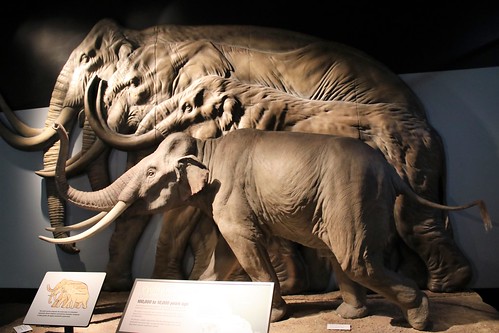 About the size of a large horse,  these diminutive mammoths survived on the California Channel Islands for about 90,000 years. Like other mammoths during the Pleistocene, they disappeared. Exactly what led to their demise is not clear but likely it was a combination of warming climate, human hunting, and other environmental changes, including large wild fires.  Although there is no direct evidence they were hunted by man, numerous charred bones have been found adjacent to fire pits on Santa Rosa island along with two skulls from which brains had been removed. 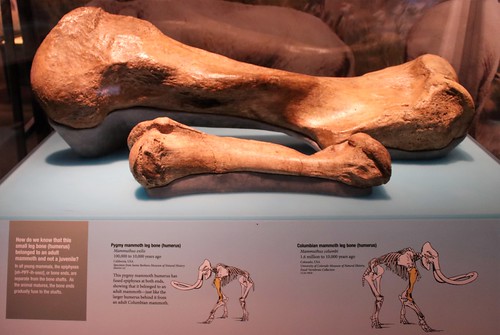 Humori of a full sized Columbian Mammoth and that of an adult Pygmy.

Dwarf woolly mammoths were also found on Wrangel Island in Russia, probably from a similar isolation.

Lyuba
Although these behemoths (and pygmies) are endlessly interesting, the real star of the mammoth exhibit was Lyuba – the 41,800 year old baby (one month of age) Woolly mammoth found perfectly preserved in Russian permafrost. Her exquisite  preservation was due to being  immediately sealed off from oxygen, pickled by bacterial acids, and frozen in the permafrost for thousands of years. All of her internal organs were fully intact and her DNA was well preserved. She was apparently trapped in a bog and then drowned having swallowed mud. 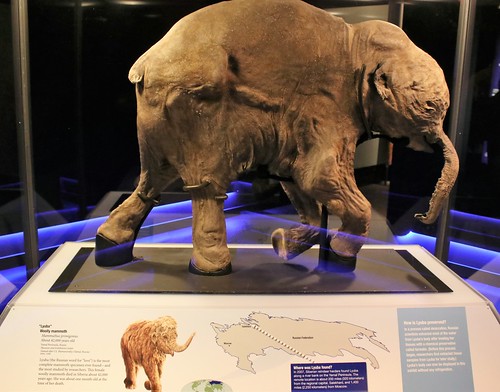 Lyuba, A Russian term for “love,”  named after the wife of one of her discoverers

Lyuba’s permanent home is the Shemanovskiy Museum and Exhibition Center in Salekhard, Russia. She is on loan to the Field Museum who sponsored this exhibit. We were informed that she was essentially fully intact, although several organs had been removed, and that she was now preserved with formalin. 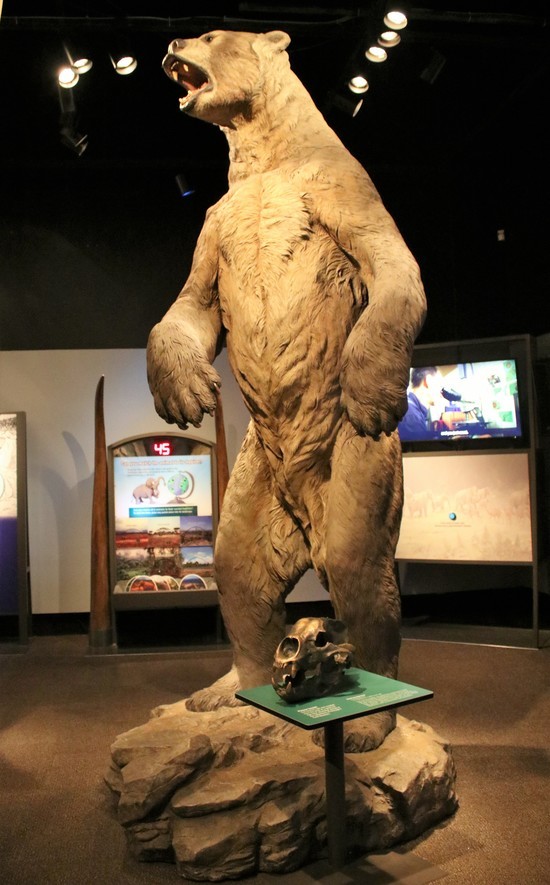 Short-faced Bear: The largest and perhaps the fastest bear ever.

As part of this mammoth exhibit were some other megafauna from the Pleistocene such as the Giant Short-Faced Bear. While standing 12 feet tall on its hind legs, it was rangy and is considered the fastest bear to have ever lived, able to run perhaps 40 mph!  they were thought to have been 100% carnivorous. Check out the size of those paws! This guy could have stood eye to eye with the Mammoths.