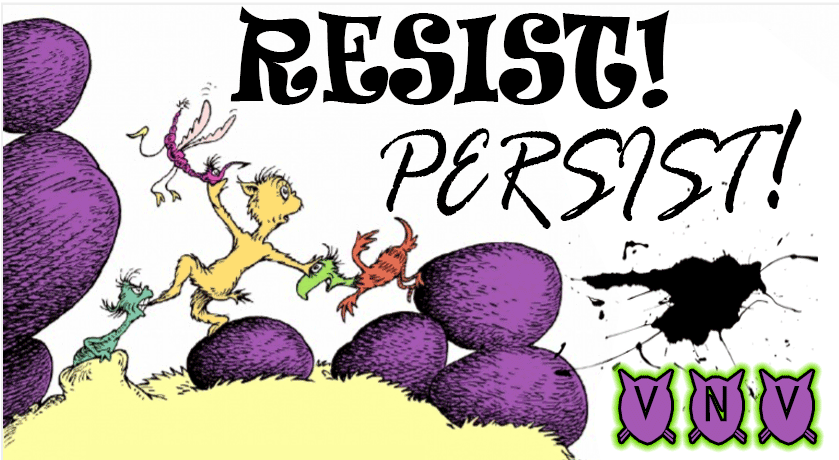 With Love from the Land of the Absurd:

It’s all DoReMI’s fault. Tuesday’s post was a wonderful collection of political cartoons, including a very appropriate one from none other than Theodor Seuss Geisel, the one and only Dr. Seuss. I learned to read on Seuss books and always loved the good doctor’s gentle absurdity.

And lo and behold, as I pondered what to do for today’s Hump Day Free For All, my brain churned, coughed and sputtered and produced this. I offer it with love, with all props and respect to the Master, and with the blessing of Eris. And now… 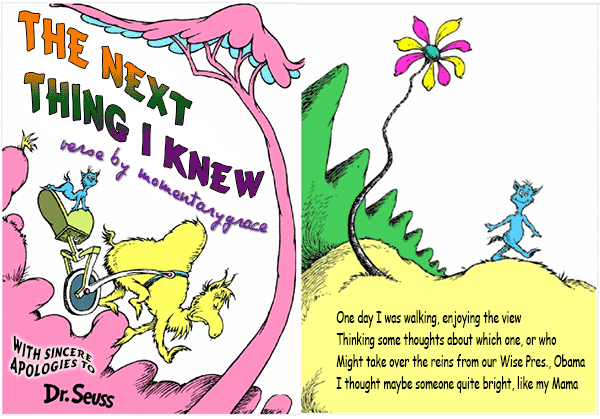 The Next Thing I Knew by MomentaryGrace

One day I was walking, enjoying the view
Thinking some thoughts about which one, or who
Might take over the reins from our Wise Prez, Obama
I thought maybe someone quite bright, like my Mama

Someone who could think, and could hear, and defend
All the children, the women, boys, girls and men,
Someone with a heart who would listen and care
But someone with smarts who would learn and prepare

It wouldn’t be easy, to follow Four Four
He was quite a cool fellow and sure knew the score!
To battle obstruction from obstructors who
Had other ideas about what we should do

Ideas like big tax breaks for those who had lots
And not so much help for Moms and Pops with small tots.
They’d have to be hearty, whoever we chose
To face any problem that ever arose

They’d need to know stuff that a Prez needs to know
And care about people, and not just for show.
And there was a person I thought I might know
Who seemed to just fit, be the right one to go!

We’d only had hims, though some hims had been fine
(And some not so much but that happens, at times),
It seemed like we’d only let hims try the test
Maybe shes could do as good, or maybe do best.

It seemed like I wasn’t the only one thinking that
Some other folks liked the idea right off the bat
Now, not everybody, but still, quite a few
If it was enough, well then, that’s what we’d do.

The more it was something we might end up doing
The more pleased I got with the idea a-brewing
So did many others, so many, we thought
This Her would be perfect for that new Prez spot.

For She had been working for quite a long while
To show how a Village could help raise a child
And show that although in the past some opposed,
All persons were persons, not just these and those.

We did all we could to persuade lots of others
That this was the right time for mothers, not brothers
To just take the reins for a while and do well…
But then somehow everything just went to hell!!

Some cried “EMAILS!” and recounted old stories
That just weren’t true but they caused tons of worries
That other guy running just seemed to tell lies
And some folks believed them and not their own eyes.

It didn’t make sense, but before I could gasp
That orange faced liar had our land in his grasp!
One minute we thought we’d be happy with Her
But the next thing I knew all that turned to a blur

The next thing I knew our new Prez was a Drump
Could it be, he’d be taking us down in a slump?
There was only one thing we could even consider
We had to Resist to have hope of much better.

To let all his cronies who brought this to pass
Know now, and next week that this bad stuff can’t last
We won’t let them do everything that they wanna
We’ll fight and be brave, just like Her, and Obama.

So that’s how it happened, the next thing I knew
That’s how we got here, and the rest’s up to you
If you think a person’s a person, and more
If you can help fight and Resist that old bore

We’ll work very hard and we’ll help out each other
To fight for good causes and support all our mothers
And also our brothers and sisters and friends
And what we all love we’ll defend to the end.

all illustrations are Theodor Geisel’s, used with love and respect

There once was an old adult male
Whose ego was awfully frail.
He won an election
But craved more affection
So promptly returned to the trail