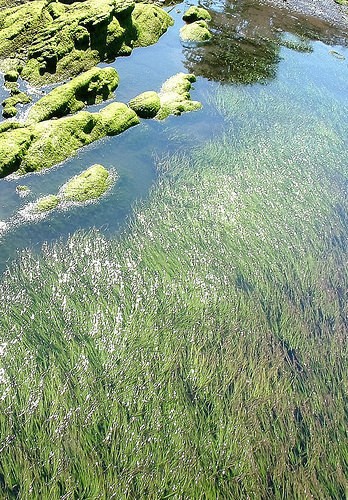 This diary is about the wonders of eelgrass, one of the major components of near shore habitat that nurtures a myriad of sea critters. Additionally it provides many other functions in support of our sea life, our recreation, and it even contributes to reducing the CO2 problems in our oceans and atmosphere. There are other sea grasses and kelps that contribute as well, but I think that eelgrass is a star.

Eelgrass is a common name for a species of seagrasses.  I will focus on the salt water variety of Zostera marina and describe its vital ecological functions, its current status, and efforts to sustain it. This form of eelgrass is the most widely distributed aquatic flowering perennial in the northern hemisphere, growing largely in the cooler waters of the northern Atlantic and Pacific oceans.

I will in part highlight eelgrass in Puget Sound, the southernmost part of the Salish Sea which is the second largest estuary in the US (by volume). However, most of what applies to our local intertidal waters also applies to eelgrass beds and other seagrasses elsewhere in the Salish Sea, along the shores of Oregon and California, the western Atlantic Seaboard and near shore habitats globally.

This is the first of a two part post. In this first part, I describe the many gifts it gives us. In Part 2, I describe its current status, take a look at its threats and the efforts underway to preserve this valuable resource.

Zostera marina grows in the intertidal zone where its rhizomes attach to sandy and muddy bottoms that give the grass a stable platform for it to spread and keep from being torn out by tidal changes and storm surges. Being a flowering plant, it also reproduces by seeds (in warmer waters), which along with its rhizomes form large meadows within the estuarine intertidal zones. Its three foot long leaves or blades float and drift upward  from the mud secured rhizomes. These leaves flourish in clear, shallow water as they require good sun light for photosynthesis.

There is evidence that eelgrass is in serious decline worldwide and to the extent that it is, that decline is a tragic loss for the planet given all that it provides. Eelgrass is not just another ordinary grass.

Eelgrass meadows  as Nursery and Cafeteria:

Invertebrates: The state of an eelgrass bed’s health and vitality is widely considered one of the more significant vital signs of the health of near shore and estuarine waters. There are good reasons that eel grass meadows are considered not only nurseries but also food factories and much more.

Accumulating on the eelgrass leaves are a variety of organisms such as diatoms (minute algae) and bacteria, as well as detritus from decaying plant and animal matter. Accumulated nutrients provide a virtual cafeteria for a variety of invertebrates living in and under the eelgrass meadows.  Eelgrass is an essential component of the food web within the intertidal zone.

Availing themselves of this cafeteria are detritivores such as amphipods (tiny crustatceans) and polychaete worms. Some clams and other delicacies such as Dungeness crab also feast at this eelgrass table as do Seaslugs and scallops.

Herring: Eelgrass beds provide a protective environment for small and growing forage fish. One of the more important of the forage fish on the West coast and particularly in the Salish Sea is the Pacific Herring (Clupea pallasii).

These small silvery fish spawn their eggs on eelgrass leaves (as well as other seas grasses). The sticky eggs adhere to the leaves, to rocks, and to other components of the meadow.

So, simply being available for egg deposit is important. Further, these eggs provide food for other species such as diving ducks (e.g scoters).

Salmon: After hatching from their spawning beds up stream young salmon (fry) learn to eat on their own and mature for a few weeks to months before they migrate downstream toward salt water. The area where the fresh water of the natal stream meets and mixes with the tidal influence of the salt water is called an estuary.  The estuary is typically where stream sediments of sand and mud have been deposited and are therefore prime locations for eelgrass to grow. In turn, these estuarine meadows afford anenvironment where young salmon have an opportunity to accustom their bodies to saltwater (smolting) while feeding and maturing.

This smolting begins their final development and growth in preparation for their upcoming ocean journey. A primary prey for young salmon is the Pacific Herring that hang out in the eelgrass.

Birds: A number of aquatic birds feed in eelgrass beds also such as the gulls, ducks, geese,  and particularly the Great Blue Heron.

The forage fish attracted to eelgrass meadows are the staple of the great blue heron diet. Many heronries are located next to eelgrass beds. These feeding areas are vital to the survival of the heron colonies.

The stability of heron colonies is also an important biological indicator of the health of the near shore waters of Puget Sound and Salish Sea shore.

Diving ducks eat the herring eggs from eelgrass leaves. At low tides, Gulls go after shell fish and sea stars close to or on the surface. Geese and ducks eat the eelgrass itself.

The list is very long of the variety of  critters that live in and whose very lives depend on the eelgrass beds both locally and worldwide.

Eelgrass is a “blue Carbon” sink:

Eelgrass, along with other aquatic plants are efficient at sequestering and storing atmospheric and ocean CO2. Carbon stored in soils and biomass of our coastal ecosystems is appropriately referred to as “Blue carbon.”  On a per hectare basis, coastal ecosystems that include mangrove forests, tidal marshes, and seagrasses  can store twice the amount of carbon as can terrestrial forests.

As shown in the graph below, the clear majority of storage goes on underground in the form of dead and decaying vegetable and animal matter. And blue carbon accounts for a huge proportion of world carbon storage, particularly in relation to its area.

Although seagrasses account for less than 0.2% of the world’s oceans, they sequester approximately 10% of the carbon buried in ocean sediment annually.

In addition to sequestering CO2, seagrasses are known as the “lungs of the sea” because they generate oxygen through photosynthesis.  Each day a single square meter of seagrass can generate 10 liters of oxygen.

So eelgrass and its relatives are no ordinary grasses. Indigenous peoples such as the Haida Nation of Pacific North America, among others have known this for thousands of years as their livelihoods and cultures have depended on it.

“When the tide goes out, we fetch our buckets and shovels and head for the t’aanuu eelgrass meadows, where we hunt for ḵ’ust’an crabs and dig for kyuu clams. In the spring, iinang herring coat the t’aanuu with their eggs, and there are always many creatures to see resting, feeding, and mating between the piles of long green leaves.”

Eelgrass meadow, a nursery and cafeteria on Haida Gwaii, B.C.