The Village News & Views March 29, 2017
Wednesday Get Over the Hump Free for All 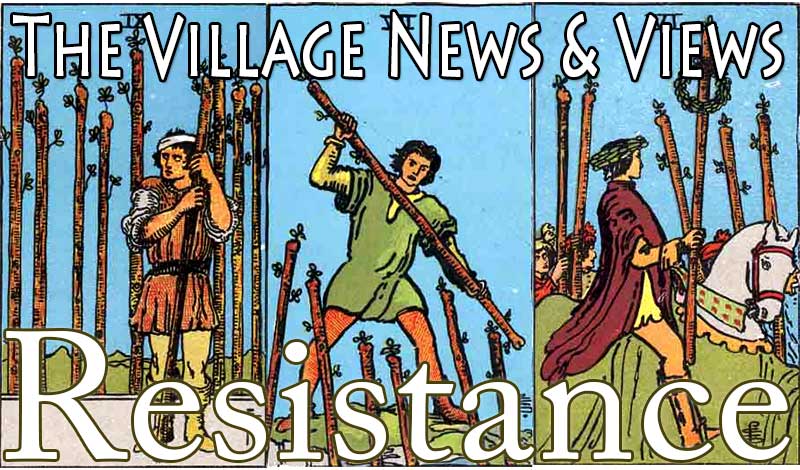 It’s day 69 of the Resistance to the regime of Trump and the Republican majority. The sheer level of tension and intensity is affecting everyone except those who are insulated by ignorance or devotion to bigotry.

One way to process situations and events which threaten to overwhelm us is to look for our own hidden perceptions through the use of symbols.

I’ve been fascinated by one such method of seeking understanding, Tarot cards, for many years. I don’t read often and I don’t read for others but I love the cards, love the deep layers of symbolism and love the way these things can coax out of a receptive consciousness new aspects of understanding about things we already know.

I have half a dozen decks or so, but like most people, the first exposure I had was via the Rider-Waite deck.

The cards were drawn by illustrator Pamela Colman Smith from the instructions of academic and mystic A. E. Waite, and published by the Rider Company.

Some imagery remains similar to that found in earlier decks, but overall the Waite-Smith card designs represent a substantial departure from their predecessors. The Christian imagery of previous decks cards was toned down, for instance the “Pope” card became the “Hierophant”, the “Papess” became the “High Priestess”.

Nevertheless, there is still a lot of Christian imagery in the illustrations, which appear to be set roughly in a medieval European environment.

Which brings me to something I ended up doodling with in Photoshop, and then before I knew it things had gone a little bit beyond doodling. I don’t really have a good excuse for this. Nevertheless I wanted to bring it out, in spite of the fact that it’s one of the rather craziest things I’ve done in a while, and coming from me, well, let’s just say that’s an interesting proposition. 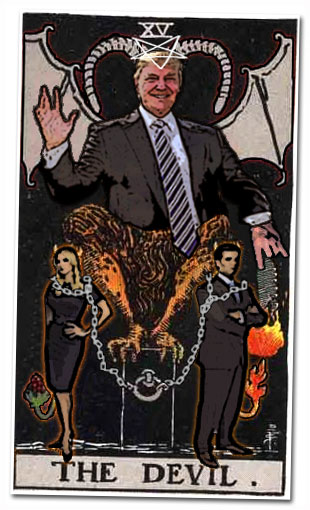 Now, let’s be clear. I don’t think Donald Trump is the Devil. That’s actually giving him way too much credit. However the image came to me, and once it had there was no shaking it loose.

I tried to talk myself out of it, but once I’d refreshed my memory as to the meaning of the card, there was just no getting around it.

The card represents: Being seduced by the material world and physical pleasures; lust for and an obsession with money and power. Also: Living in fear, domination and bondage; being caged by an overabundance of luxury

My version isn’t much of a departure, in fact if the Rider-Waite deck wasn’t arguably in the public domain I might hesitate to publish it. However The Donald represents lust for money and power, and corruption through the material world and physical pleasures, as well as the need, even the obsession to dominate. As you can see, in my card, he’s dominating his family, who, at least in the case of these two (as well as the older sons) are far from innocent victims, nevertheless they are as much in bondage to him as they appear here in the card. 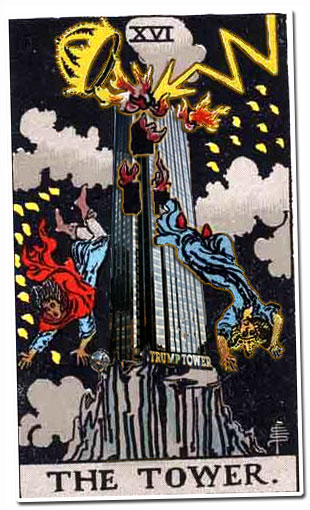 The next one you see here was almost an afterthought. It might just as well be the symbol of 11/9/2016.

This card follows immediately after The Devil in all Tarots that contain it, and is associated with sudden, disruptive, revelation, and potentially destructive change.

This was just too easy, especially since it is numerically the next card the the deck to The Devil.

Most sources, especially for beginners, are usually quick to explain that cards like Death, The Devil, and The Tower in a reading rarely mean something extremely dire is about to befall the querent. In the case of The Tower it definitely denotes change, however, often unexpected and disruptive. Hence my association with the recent election. (And if the Tower even in its original form reminds you too much of another date, 9/11, you are not alone, however no desire for any physical catastrophe is intended here.)

I don’t wish to leave you there, however. These images are violent and perhaps frightening if they don’t strike you immediately as silly or ridiculous. However I couldn’t have stopped there and while re-purposing the entire Major Arcana in terms of the current political situation is probably more real work than I am likely to do, it’s not the first time I have played around mentally with pairing cards and certain people. Some day I’d like to do The Magician as Barack Obama, Michelle perhaps as Temperance, and while a certain Junior Senator from Vermont might see himself as the Hermit, I tend to lean more towards the Hanged Man.

Before 11/9, I would have placed Mrs. Clinton as The High Priestess, because after all, she’s brilliant, a wonk, and as far as I can tell deeply spiritual. However when I considered her again against the deck, another and for the moment, better association struck me. 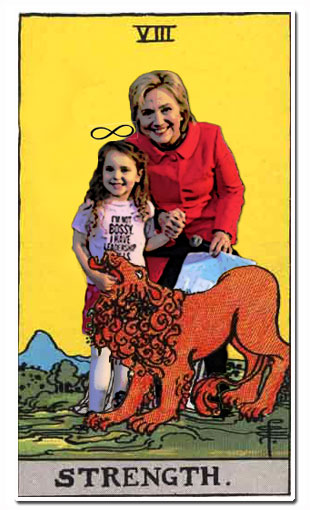 In the original Rider-Waite version, the female figure is petting, or gently restraining, the lion (yes, that’s what a medieval lion looks like).

In my version, the young girl is calming the lion, her hand held protectively by guess who. I have the infinity symbol above the girl’s head instead of the major figure, since that I think is where Hillary would place it. The children are our eternity, and Hillary has always been there to give them the best shot at a better tomorrow.

I tried not to cover the text on the girl’s shirt but just couldn’t manage it. The shirt says, “I’m Not Bossy, I have Leadership Skills” and this is from a photo taken during the campaign.

Here is one interpretation of the card:

Strength indicates the importance of mind over matter, and reminds you to focus on what you do want rather than what you don’t want in your life. Its main point is that you have the ability to harness your thoughts and to use them for your – and everyone else’s – highest good. Not only do you have the ability; you have the responsibility. So conquer your fears, control your impulses, and never lose patience with yourself or what you are doing.

Strength is something we need in order to maintain the Resistance, and yet as the card illustrates, it is not a brute force, rather, it is calm, confidence, in line with the fact that the card’s original or earlier name was Fortitude.

And that is all I have for you today as far as symbolism and meaning, but if it nudges your mind into interesting paths or even gives you a respite from other concerns and worries, then that’s enough. 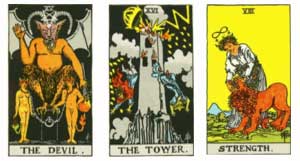 Resisting Bernie’s Siren Song In The Age Of Trump

I believe that user data belongs to the consumer, not the provider, and should not be sold for profit by ISPs or telecoms. #broadbandprivacy

This is outrageous. No one should be invisible in America https://t.co/IOaCit7dg2