The Weekly Democratic Party Address was delivered by Senator Tom Carper of Delaware. He spoke about the Republican Party’s healthcare plan, a plan that will take healthcare away from 23 million Americans and make health insurance essentially unaffordable for older Americans and for people with pre-existing conditions.

Senator Carper reminds us about the meaning of Memorial Day (not just barbecues and the beginning of summer) and speaks about veterans and their health care needs:

“Nearly two million veterans—that’s one in 10—rely on Medicaid for their health care. That includes some 6,000 veterans who are living in Delaware. The Republican plan to dismantle the Affordable Care Act cuts more than $800 billion from Medicaid. This plan combined with President Trump’s budget proposal would bump that cut to $1 trillion. At best, this would significantly scale back our veterans’ Medicaid benefits and, at worst, cause them to lose their benefits altogether.”
-U.S. Senator Tom Carper (DE), a 23-year veteran of the U.S. Navy and Naval Reserves.

(A transcript will be added if one becomes available) 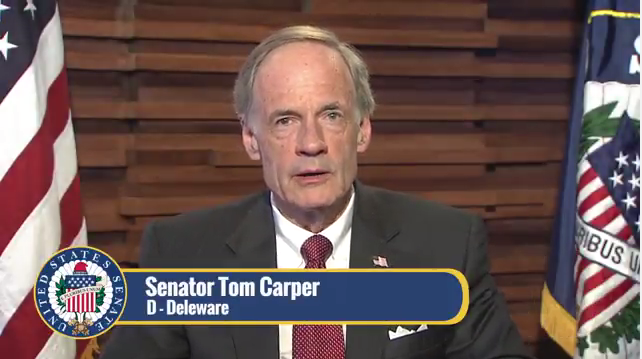 The poor children in Manchester. We have to keep praying, if they will allow us to pray for them.

The CBO report also confirmed that, you know, with any injury or notice of an illness, many Americans will find they’ve been paying for health coverage that doesn’t cover much at all.

Trumpcare means higher costs, 23 million hardworking Americans losing coverage, key protections gutted, a crushing age tax, and stealing from Medicare. I could go into detail about each and every one of these things, but maybe if you ask me, I will.

It’s a billionaire’s tax cut disguised as a healthcare bill, one of the largest transfers of wealth, once again, from working families to the rich and corporate America. In that regard, Trumpcare has a great deal in common with the President’s budget: stealing from our investments in jobs for working families in the future to give tax breaks to millionaires.

The Trump budget is a stark showcase of the President’s broken promises. The President said, ‘I’m going to be the greatest job producer that God ever created.’ Instead, the budget steals hundreds of billions of dollars from critical job‑creating investments in infrastructure, education, and clean energy.

In terms of health, the President promised he would free the Earth from the misery of disease. Instead, in addition to the devastation of Trumpcare and what that means, he wants to chop more than $7 billion from the [National Institutes of Health] budget, one‑fifth of its total budget.

Social Security and Medicare: the President promised he would not cut Medicare, Medicaior Social Security. Instead, his budget slashes Social Security disability benefits, insurance benefits, steals another $610 billion from Medicaid on top of the $840 billion that’s already in Trumpcare. So a combination of over $1.4 trillion in cuts in Medicaid and all that cut means to long‑term care for seniors, either at home or in long‑term healthcare centers. It’s a middle‑class benefit, Medicaid, for long‑term healthcare. Of course, what it means to children and others is devastating as well.

The President’s budget lays the groundwork for privatizing the [Department of] Veteran’s Affairs, inflicts particularly deep damage on rural communities and makes colleges more expensive for students across America. So everybody gets hit in this budget, unless you happen to be very wealthy.

The President’s budget is shortsighted and a cruel plan that perfectly reflects the Republicans in Congress. It’s perfect in that respect. This is the same budget, the Ryan budget, the road to ruin that was advanced by Ryan, as Chair of the Budget Committee, and Price too.

The budget should be, as we say over and over, a statement of our values. This is an immoral document. It’s not a statement of anybody’s values. It gives new meaning to the term ‘war on poverty.’

So here we are. We will continue to ensure that the American people know what the stakes are. We had thought coming into this administration we’d be talking about jobs now. Where’s the infrastructure bill for over 4 months later?

Jobs – we were hoping that we could be talking about, revising the Internal Revenue Code for fairness, simplification, lower the corporate rate, close special interest loopholes and the rest, have a middle class tax cut. Where is their plan?

The plan that we’ve seen from the Republicans adds $5.5 trillion – trillion with a ‘TR’ – trillion to the deficit, $5.5 trillion. That money over those years, as a 10‑year figure, would cover the shortfall in Social Security for 75 years.

So they want to talk about, ‘we’ve got to balance the budget; we have to go after entitlements.’ Well, let’s look at it. We should subject every dollar we spend or every tax we collect to the harshest scrutiny. Is it creating growth? Is it creating good‑paying jobs in our country? Is it reducing the deficit?

Today, Democratic Leader Nancy Pelosi joined Congresswoman Barbara Lee, House Democrats and a coalition of anti-poverty, labor, civil rights, faith and progressive leaders for a “Hands Off” press conference to denounce the destructive cuts to vital programs expected in President Trump’s budget. Below is a transcript of the Leader’s remarks:

Leader Pelosi. “Thank you, [Congresswoman] Barbara Lee, for being a champion – that’s hardly the word, it doesn’t seem to measure up, to the leadership she provides for fairness in our country. Tianna, thank you for sharing your story. You are the VIP at this reception here. And I want to thank [Congresswoman] Barbara Lee and Lee Saunders and our other friends in labor who are here. Lee Saunders just had his birthday, and happy birthday Lee Saunders!

“My theme for the week has been – because I went to my grandchildren’s graduation from high school over the weekend – a theme that I heard there and others here have heard me say on other occasions, ‘to whom much is given much is expected.’ And our country has been given so much. But Tianna [Gaines Turner] and her family give much to our country as well. And we cannot allow this document, this immoral document, to deprive Tianna and her children of the future that our founders envisioned for her and for all Americans.

“Their budget, their budget undermines the strength, the possibilities and the future of our country. Food out of the mouths of babies, housing from seniors and our veterans, Medicaid, which is the strong part of long-term care, whether it’s in a facility or at home. Long term care, heavily dependent on Medicaid, a middle class benefit that is being undermined by $1.4 trillion, do you understand what I’m saying? Trillion with a capital ‘TR’ dollar cut.

“All of this to give a tax break to the wealthiest people in our country. It is shameful, it is immoral, it is indecent and some say it’s, ‘dead on arrival; it won’t see the light of day.’ It is not unlike other budgets the Republicans have put forward in the House.

“The [Paul] Ryan budget, the [Tom] Price budget and the rest: this is a picture of who they are and I wish they weren’t. I don’t want to sound political but this is a very values-based discussion that we are engaged in. Let the world see, let the country see, let the people of faith in our country and those who care about our country’s future – who see the biblical power to cure in the National Institute of Health getting $7 billion cut.

“Now everything that I have said means cuts in jobs too, cuts in good-paying jobs, 2 million [jobs] in what they did to repeal the Affordable Care Act, 1.4 million in this bill and counting. So you’re talking about jobs, decency and strength of America.