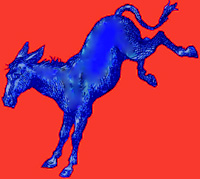 Before I start today’s look at the Democratic and Republican Party platforms, your Resistance reminder to call, call, and call again. Yes, even if you have Dem senators and even if you know your senator is a jerk who is in favor of #Abomnicare:
Information for contacting those senators on the [allegedly] wavering list…

And now back to your regularly scheduled programming…
The title of today’s post is drawn from the first of thirteen major headings within the Democratic platform.  When contrasted with the Republican platform (which, by the way, is far less systematically organized) it is clear that the parties have significantly different visions, principles, and legislative policy goals.

After an opening paragraph that sounds like Obama, Clinton, and Sanders rolled into one voice, this is what Democrats start with.

Democrats believe that the current minimum wage is a starvation wage and must be increased to a living wage. No one who works full time should have to raise a family in poverty. We believe that Americans should earn at least $15 an hour and have the right to form or join a union and will work in every way we can—in Congress and the federal government, in states and with the private sector—to reach this goal. We should raise the federal minimum wage to $15 an hour over time and index it, give all Americans the ability to join a union regardless of where they work, and create new ways for workers to have power in the economy so every worker can earn at least $15 an hour. We applaud the approaches taken by states like New York and California. We also support creating one fair wage for all workers by ending the sub-minimum wage for tipped workers and people with disabilities.

So what does the Republican platform say about minimum wage? It took 20 minutes of searching, and then I was forced to resort to Ctrl F.

Minimum wage is an issue that should be handled at the state and local level.

To be scrupulously fair, there is another mention of minimum wage. On page 30, on the section about Americans in the territories, there is this:

The territories’ economic stability and potential for growth must be considered in any trade agreements between the United States and other Pacific nations. They should be given flexibility or exemption from laws that increase costs for their populations, such as the minimum wage and the Jones Act concerning shipping. (Bolding mine)

The statement from the Democratic platform also talked about union membership, and since it is common knowledge that Republicans are generally anti-union, finding a systematic, clear policy about unions in the Republican platform should be easy to find. Right? It turns out I was overly-optimistic about clear organization within the Republican platform; although I did not find a systematic approach, I did find a consistent distrust and disdain for unions.

On page 5, there’s this: We renew our call for repeal of the Davis-Bacon law, which limits employment and drives up construction and maintenance costs for the benefit of unions.

Also on page 5 (I had to include variations of the word “union”): Although unionization has never been permitted in any government agency concerned with national security, the current Administration has reversed that policy for the Transportation Security Administration. We will correct that mistake. Americans understand that, with the threat of terrorism, their travel may encounter delays, but unacceptably long lines at security checks can have the same impact as a collapsed bridge or washed out highway. TSA employees should always be seen as guardians of the public’s safety, not as just another part of the federal workforce.

The mother lode on pages 7 and 8 in a section about the NLRB: They have repealed union transparency rules that allowed members to discover what was being done with their dues. They have outlawed alternatives to unions even when they were favored by the workers…

…Technology has already created jobs that did not exist fifteen years ago, and today’s workers need flexibility and family-friendly options to make the most of them, especially portability in pension plans and health insurance.

We intend to encourage those trends by bringing labor law into the 21st century. It should encourage cooperation between management and workers, not conflict. All workers, including union members, must be free to accept raises and rewards without veto power from union officials. All unionized workers should be able to find out what is going on in their union trust funds and in their executive compensation. We support the right of states to enact Right-to-Work laws and call for a national law to protect the economic liberty of the modern workforce.

Also on page 8, there’s a whole section devoted to the Federal workforce and unions: We urge Congress to bring federal compensation and benefits in line with the standards of most American employees. A Republican administration should streamline personnel procedures to expedite the firing of bad workers, tax cheats, and scammers. The unionization of the federal workforce, first permitted by Democrat presidents in the 1960s, should be reviewed by the appropriate congressional committees to examine its effects on the cost, quality, and performance of the civil service. Union representatives in the federal workforce should not be paid to conduct union business on the public’s time.

No more mention of unions until page 12, in the section about the First Amendment: Constitutionally Protected Speech: We support repeal of federal restrictions on political
parties in McCain-Feingold, raising or repealing contribution limits, protecting the political speech of advocacy groups, corporations, and labor unions, and protecting political speech on the internet. We likewise call for an end to the so-called Fairness Doctrine, and support free-market approaches to free speech unregulated by government. We believe the forced funding of political candidates through union dues and other mandatory contributions violates the First Amendment. Just as Americans have a First Amendment right to devote resources to favored candidates or views, they have a First Amendment right not to be forced to individually support individuals or ideologies that they oppose. We agree with Thomas Jefferson that “To compel a man to furnish contributions of money for the propagation of opinions which he disbelieves and abhors is sinful and tyrannical.”

The next unique mention of unions is found, a bit buried, on page 29 in the section, Honoring Our Relationship with American Indians. This is not an area with which I am well-informed, so I’m not even really sure what they’re talking about:
Republicans believe that economic self-sufficiency is the ultimate answer to the challenges confronting Indian country. We believe that tribal governments and their communities, not Washington bureaucracies, are best situated to craft solutions that will end systemic problems that create poverty and disenfranchisement. Just as the federal government should not burden states with regulations, it should not stifle the development of resources within the reservations, which need federal assistance to advance their commerce nationally through roads and technology. Federal and state regulations that thwart job creation must be withdrawn or redrawn so that tribal governments acting on behalf of American Indians are not disadvantaged. It is especially egregious that the Democratic Party has persistently undermined tribal sovereignty in order to provide advantage to union bosses in the tribal workplace. Native communities should have the same authority as state governments in labor matters, so that union bosses and the National Labor Relations Board (NLRB) cannot undermine the authority of tribal governments.

Last, but not least, on page 34 in the Choice in Education section:
Their D.C. Opportunity Scholarship Program should be expanded as a model for the rest of the country. We deplore the efforts of Congressional Democrats and the current President to eliminate this successful program for disadvantaged students in order to placate the leaders of the teachers’ unions.

Having had to jump all over the Republican platform to find their policies on unions, it seemed a good time to go back to the Democratic platform to see if they addressed some of the specific points raised by Republicans about the NLRB and “Right-to-Work” laws. As it happens, I just had to look down one paragraph from where I started.

Protecting Workers’ Fundamental Rights The Democratic Party believes that when workers are strong, America is strong. Democrats will make it easier for workers, public and private, to exercise their right to organize and join unions. We will fight to pass laws that direct the National Labor Relations Board to certify a union if a simple majority of eligible workers sign valid authorization cards, as well as laws that bring companies to the negotiating table. We support binding arbitration to help workers who have voted to join a union reach a first contract…

…Democrats believe so-called “right to work” laws are wrong for workers—such as teachers and other public employees who serve our communities every day—and wrong for America. We will continue to vigorously oppose those laws and other efforts that would eliminate dues check-off procedures, roll-back prevailing wage standards, abolish fair share requirements, restrict the use of voluntary membership payments for political purposes, attack seniority, restrict due process protections, and require annual recertification efforts. We oppose legislation and lawsuits that would strike down laws protecting the rights of teachers and other public employees. We will defend President Obama’s overtime rule, which protects of millions of workers by paying them fairly for their hard work.

I’m going to end this post for the day, even though I didn’t even complete the first section of the Democratic platform. Until I started writing, I didn’t realize how much of a stumbling block the different styles of writing and organization would create. (I have a better handle on it now, so next week will be easier.) However, I’m beginning to conclude that the different approaches to the platform are very much in keeping with the differences in the parties. The Democratic platform is, by and large, an affirmative statement of legislative goals. The underlying principles are explained in an opening paragraph, which is followed by multiple examples of policy and legislative actions which would support the principle. The Republican platform tends to be a statement of which policies they will undo (as is to be expected since they were not holding the Executive), but throughout, the language and organization of the platform overall is less about specific laws to be enacted and more about grand principles like “freedom,” “family,” and “free markets.” This epitomizes the different approach to messaging used by our parties; is there something in this observation that can strengthen Dem messaging? Should we talk more about our underlying principles and be less wonky? Or should be hammering out unified messages about our policy/legislative goals and let that be the expression of our principles? Or is our messaging sufficient as it is?

And now for today’s lighter moment…

I know it’s a political post, but not all running is running…

I have two now…

This is Duddles. He did an attempt. 13/10 someone help him (vid by Georgia Felici) pic.twitter.com/UDT7ZkcTgY