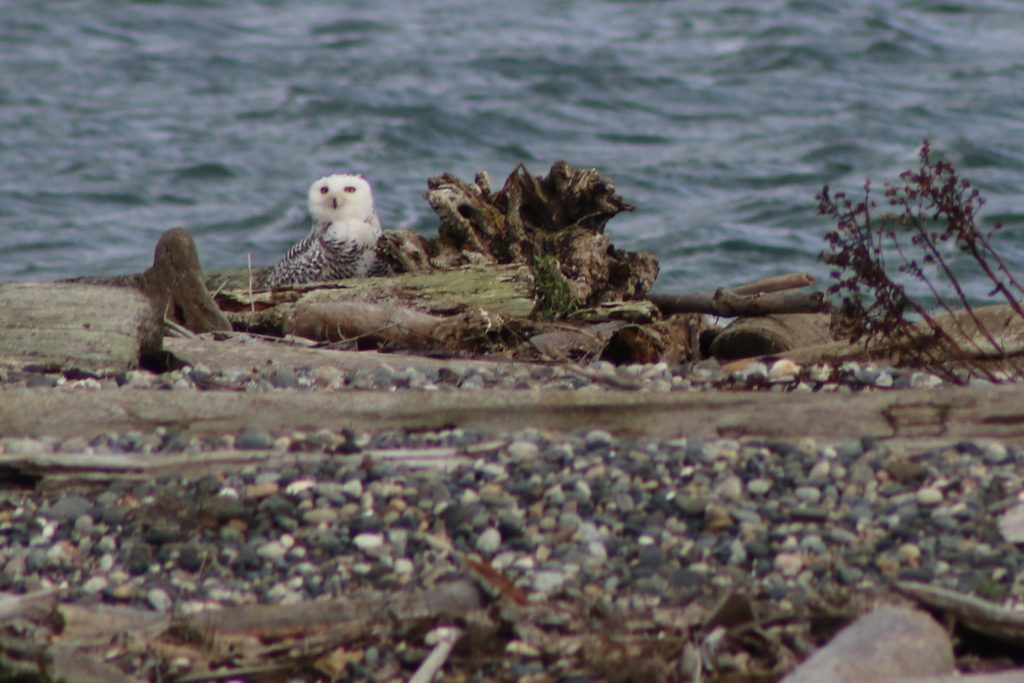 Cued by our local online birders group, I was informed of the presence of a Snowy Owl within an esy 25 mile drive of home. They are occassional visitors to our area as we have some of the type of habitat they seem to prefer for their winter digs along coastal beaches.

As shown in the range map, they summer in the high arctic tundra regions where they prey primarily on lemmings along with other rodents, rabbits and they have been known to prey on geese.

In the winter, these owls typically head south across Canada and somewhat south of the Canadian border. Four years ago (2013), they came in larger than usual numbers. Such an influx into new territory and in great numbers is called an “Irruption.”

This was the largest irruption since the 1920s. These irruptions occur about every four years and seem to coincide with cyclical increases in lemming populations. Such an irruption is predicted again for this winter (2017-2018).

This particular bird found a rather typical Snowy Owl  perch on a beach near the open waters of Georgia Strait and the Salish Sea. Sandy Point is a Large spit situated about midway between Bellingham and the Canadian border. Within the big spit she was on a smaller spit that protrudes into the local boat marina with houses on one side and the edge of the strait on the other. 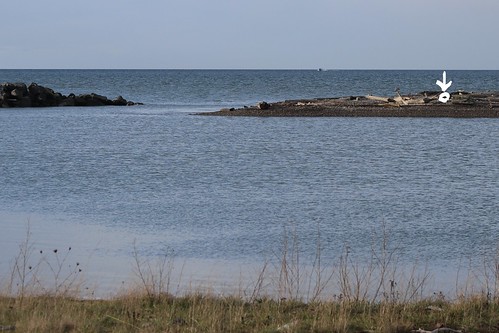 in background looking west. The bird photos were taken from the point on the left

My first visit was successful in that the bird was hunkered down behind a log on the spit shown above. Unfortunately a 15 – 20 mph wind was blowing off the water that was both cold and made it difficult to steady a camera for non-fuzzy photos. The wind even jiggled cameras on tripods. I took 150 photos in hopes that at least one would come out clear enough to discern the bird.

My second visit was equally successful as well. I was pleased to introduce this lovely bird to my granddaughter who loves all critters and was visiting for thanksgiving.

This bird appeared relatively nonplussed by the setting in which she had settled. There were houses all around with boats and docks and people. But she persisted. 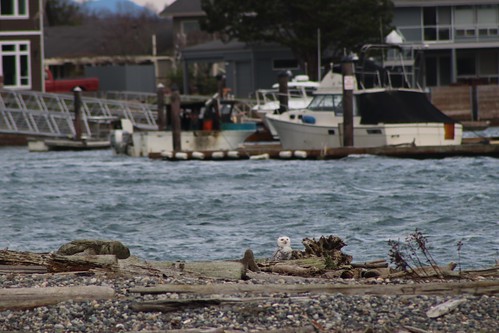 Snowy Owl on the spit in the marina, looking east

Not having had enough, I returned 4 days later. This time she was not present on the spit nor could I or others find her in the immediate neighborhood. She had been seen the day previous so perhaps she was just out hunting. Unlike other owls, Snowys are diurnal hunters. In the high arctic summers, it is 24 hours of daylight so if they waited until night time to hunt they would starve. 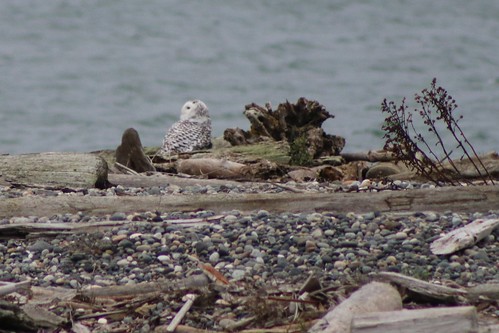 I love it when their head turns around without changing body position. She is looking backward here

Reliable population figures and conservation status are difficult to ascertain since these owls breed in the arctic tundra, far from human habitation and are considered rather nomadic. Hence there are few reliable population studies of their numbers and overall status.  We know that they are subject to human predation such as shooting and being caught in animal traps. Current estimates suggest that they are probably not threatened on a global scale, but will likely be vulnerable as the effects of global climate change encroach on their arctic breeding territory.

Because she is such a beauty, I intend to go back to see her again if I hear that she is back on the spit. 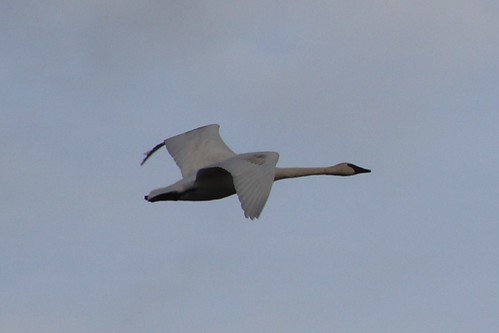 Trumpeter Swan, stretching out to six feet across the sky

On the way to see the Snowy Owl we passed some corn stubble fields that were hosting a group of Trumpeter Swans that recently arrived from Alaska where they summer and breed. They too like to spend a wet and occasionally snowy winter in this part of the country. Their smaller cousins, the Tundra Swan typically accompany them. They both seem to prefer the farm lands of the flood plains of the the Skagit River delta, just south of here. But we do get some of them for our birding pleasure. 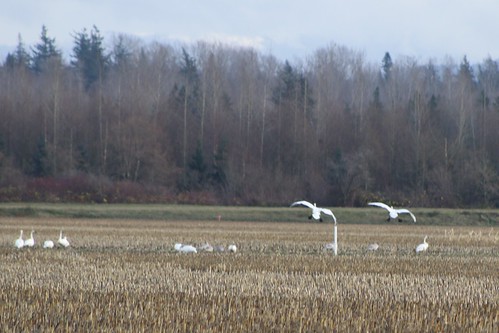 Settling into a stubble field for the evening 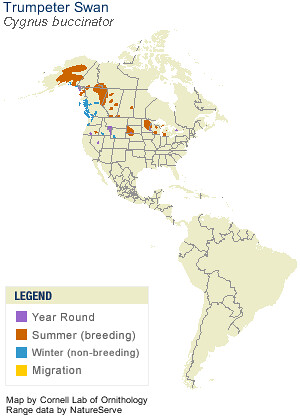 Although these long necked trumpeters are regulars here each winter, we never tire seeing them gliding along with their heads protruding nearly three feet ahead of the rest of their bodies.

The Trumpeter Swan’s scientific name, Cygnus buccinator, is from the Latin Cygnus (swan) and buccinare (to trumpet). We humans have a buccinator muscle in our cheeks—we use it to blow out candles and to blow into trumpets and other instruments.

These swans are said to prefer to winter in pastures, lakes, ponds and bays. Around here we find all of the above in fields after crops have been harvested. Our fields in the PNW are largely situated on flood plains that become large ponds from fall rains and flooding of local rivers. 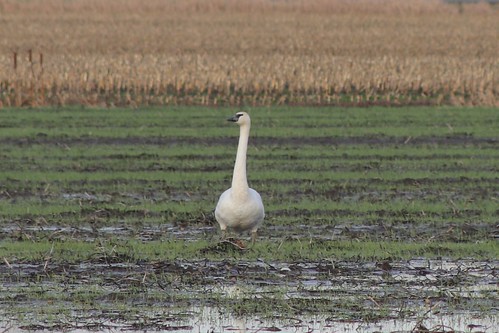 These large swans once nested over most of the country. As has been too often the case, by 1930s these birds had been hunted until there were only about 100 nesting birds south of the Canadian border. Although they have rebounded amazingly well after having been protected, they are still being reintroduced to many northern Midwestern States. Yet, they remain vulnerable to human influence via habitat loss, lead poisoning (from ingesting shotgun pellets), and more directly from shooting. 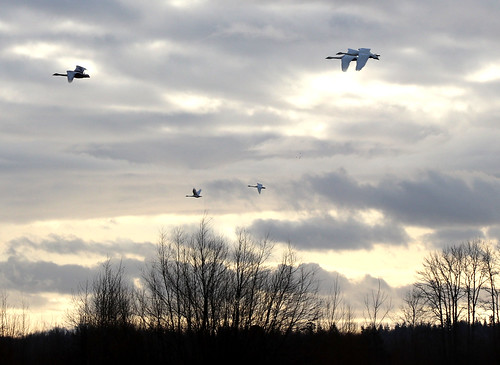