(Congresswoman Lucille Roybal-Allard of California emphasized Democrats’ commitment to work For The People and prevent a Trump Government Shutdown.)

“Appropriators understand we have a critical responsibility that transcends politics: to keep our government funded, so it can serve the needs of the American people.

“Unfortunately, House Republicans and the President have – once again – walked away from that responsibility. Due to their obstruction and failure to govern, Republicans are driving our nation to the brink of another disastrous government shutdown – at a time of great economic uncertainty, and right in the middle of the holiday season.[…]

“And if Republicans do steer our nation into a Trump Shutdown, we will swiftly pass the remaining appropriations bills with a CR for Homeland Security to re-open the government.

“On Election Day, the American people spoke, and demanded a government that would work for them. 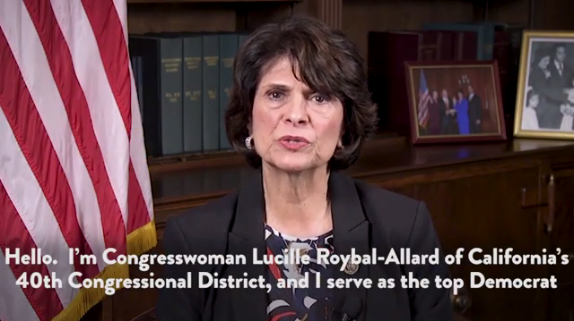 “Hello. I’m Congresswoman Lucille Roybal-Allard of California’s 40th Congressional District, and I serve as the top Democrat on the House Appropriations Subcommittee on Homeland Security.

“Appropriators understand we have a critical responsibility that transcends politics: to keep our government funded, so it can serve the needs of the American people.

“Unfortunately, House Republicans and the President have – once again – walked away from that responsibility. Due to their obstruction and failure to govern, Republicans are driving our nation to the brink of another disastrous government shutdown – at a time of great economic uncertainty, and right in the middle of the holiday season.

“Here’s the bottom line. Republicans still control the House, the Senate and the White House. They have the responsibility and the power to keep our government open.

“But this week, before the eyes of the American people, President Trump declared that he’d be ‘proud’ to shut down the government, saying ‘I will take the mantle. I will be the one to shut it down’ if he cannot force American taxpayers to spend billions of dollars on an immoral, ineffective and expensive wall.

“Democrats support a strong homeland security policy, that protects our borders and honors our values as a nation. Yet, the President is proposing squandering $5 billion on this border wall – when our nation has so many homeland security vulnerabilities that, if left unaddressed, threaten the safety of the American people.

“We need more funding for the Coast Guard’s air and sea fleets, including to pay for the first heavy icebreaker since the 1970s – because, as the Arctic ice recedes, Russia, China and other countries are winning the race to lay claim to the vast resources of that region.

“We need thousands of additional customs officers to help intercept illicit drugs and other contraband, almost all of which comes into our country through the ports of entry.

“And we need to be investing more in first responder grants to better prepare states and localities to prevent and respond to terrorism and disasters of every kind.

“These critical national security needs cannot be met if we waste $5 billion on an unnecessary and ineffective border wall.

“On January 3, Members of Congress will take an oath: to support the Constitution and protect the American people. Democrats are ready to honor that oath on Day One.

“And if Republicans do steer our nation into a Trump Shutdown, we will swiftly pass the remaining appropriations bills with a CR for Homeland Security to re-open the government.

“On Election Day, the American people spoke, and demanded a government that would work for them.

“House Democrats are ready and proud to deliver For The People: lowering their health costs, increasing their paychecks, cleaning up corruption, and protecting our national security.

Speaker-designate Pelosi. Good morning. They called a vote just when we were supposed to meet here, so thank you for waiting.

So, yesterday we passed the Farm Bill with strong bipartisan support for the bill that really was brought together in the Senate in a bipartisan way. Unfortunately, the Republicans here almost lost the rule on the Farm Bill because some of the provisions they have had for feeding the American people, nutrition programs and the rest.

It took Democratic votes to help them pass the rule for the Farm Bill, and it is a bill that is much needed for our farmers and ranchers. It has a strong nutrition part to it, and it has, again, strong bipartisan support. I think there were only 47 votes against it in the House of Representatives.

Unfortunately, we are hearing now that the President may undermine the will of Congress by doing an executive order to take food out of the mouths of babies and families in our country, as well as undermining the forestry parts of the legislation. Again, we tried to make progress in a bipartisan way, and the President then will try to undermine that legislation.

On a separate note, we have had some success on our #MeToo legislation, and House and Senate have come together. We still have some things we want more for the House, which we may pass soon in the next Congress, but we have a great compromise. And I’m very proud of Jackie Speier and Bob Brady and Congressman Harper in a bipartisan way putting together that legislation.

Today, or was it – yesterday, in the Senate they passed a CRA, a Congressional Review Act, to reverse what the Internal Revenue Service had determined. They determined that if you have a – nonprofit organizations that are doing – engaged in political activity, you don’t have to report the source of the money. This CRA passed the Senate that said reverse that decision. They said, ‘You do have to report the money.’ This is very, very important, because a lot of this is very dark, tax deductible, in some cases, money that the American people should know the source of it.

Again, we are engaged in year end [negotiations]. I don’t know if it’s even possible for us to have an omnibus bill. We have offered the President two options: one was the six bills as negotiated in a bipartisan way by the House Democrats and Republicans and, again, bicamerally agreed upon legislation and one continuing resolution, homeland security. I’m not sure – that was choice one to the President. The second choice was to have a continuing resolution that contained all seven bills until September 30. That may be the livelier prospect, in which case, all of the discussion of is this going to be in, is that going to be in, is this going to be in, no, because we won’t have that omnibus bill.

It’s really unfortunate that the President has decided that he would shut down government at a time when the markets are in a mood, where people are losing their jobs in some industries, the auto industry for one, where there’s uncertainty as to – in terms of the financial security of America’s working families, and a holiday season that the President would say he would shut down government. That’s a drastic thing for him to do, especially as we leave the Congress for the holidays, because that means it would be shut down for a while.

He said, ‘I will tell you what, I’m proud to shut down the government. I will be the one to shut it down.’

He went on further to say, I will not be – ‘I’m not going to blame you for it.’ He’s taking full responsibility for the Trump shutdown. Perhaps he doesn’t understand people need their paychecks. Maybe that’s not the life he leads. It is not enough to say, ‘We’ll pay you in January when people have to make ends meet in December.’

Of course, if he went down that path, as soon as we took over the Congress we would pass legislation to open up government and send it to the Senate, and we think it would then go to his desk. But we don’t want to have to go to that place.

They do not have the votes to pass the President’s proposal, $5 billion, whatever it is, for the wall. So, I don’t know why – nothing is going to change in that regard. I don’t know why we just don’t proceed to keep government open so that people can be home for the holidays and enjoying all of that.

Anything else? Let’s see. The Trump shutdown.

We’re very excited about our For The People agenda, lowering health care costs, increasing paychecks by building infrastructure of America. And we think that can be a bipartisan initiative working with the President and, again, cleaning up government. We will have H.R. 1 as one of our earliest piece of legislation as we go forward.

Again, we’re open to Congress. It’s going to be a town hall meeting, an American town hall meeting with openness, with bipartisanship, and with proposals starting with that – those that are the most unifying and have the broadest support in the public. Any questions?

A reminder of Nancy Pelosi’s steadfast commitment to the future of the Democratic Party:

“House Democrats won a decisive victory in November, winning a historic majority of at least 40 seats by nearly 10 million votes.

“Over the summer, I made it clear that I see myself as a bridge to the next generation of leaders, a recognition of my continuing responsibility to mentor and advance new Members into positions of power and responsibility in the House Democratic Caucus.

“For some time, there have been a number of conversations to advance a proposal to institute term limits for senior leadership positions in our Caucus. This proposal, which was developed by Members who care about the institution of the House of Representatives, would provide that Members in senior leadership positions can serve 3 terms with an additional term with two-thirds support of the Caucus. It would include the two terms of the Democratic Majority from 2007 to 2011.

“It is my understanding that Caucus Chair Hakeem Jeffries and incoming Rules Committee Chair Jim McGovern plan to bring up this proposal for a discussion and a vote by February 15th. I am comfortable with the proposal and it is my intention to abide by it whether it passes or not.”