Barbara Jordan was a Democratic member of the U.S. House of Representatives from the state of Texas and the first African-American elected to her state’s senate. 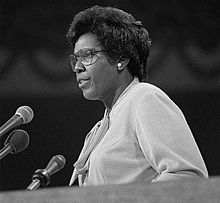 Rep. Barbara Jordan was not only a trailblazer but a great American and a great advocate for both small d and big D Democratic principles.

Speeches can contain words to live by, words that call us to action for an important cause and words that connect to our deepest feelings about fairness and compassion.

The words of women are harder to find because women did not have much of a voice in politics and were not allowed to vote until 1920.

When I wanted to include women’s voices in this series, I immediately thought of Barbara Jordan and it turns out that two of her speeches have been ranked on the list of Top 100 American Speeches of the 20th century.

The one she is most famous for is the Keynote Address at the 1976 Democratic National Convention .

This is how she started her speech:

It was one hundred and forty-four years ago that members of the Democratic Party first met in convention to select a Presidential candidate. Since that time, Democrats have continued to convene once every four years and draft a party platform and nominate a Presidential candidate. And our meeting this week is a continuation of that tradition. But there is something different about tonight. There is something special about tonight. What is different? What is special?

I, Barbara Jordan, am a keynote speaker.

A lot of years passed since 1832, and during that time it would have been most unusual for any national political party to ask a Barbara Jordan to deliver a keynote address. But tonight, here I am. And I feel that notwithstanding the past that my presence here is one additional bit of evidence that the American Dream need not forever be deferred.

She did not mince words about what makes the Democratic party different:

Throughout our history, when people have looked for new ways to solve their problems and to uphold the principles of this nation, many times they have turned to political parties. They have often turned to the Democratic Party. What is it about the Democratic Party that makes it the instrument the people use when they search for ways to shape their future? Well I believe the answer to that question lies in our concept of governing. Our concept of governing is derived from our view of people. It is a concept deeply rooted in a set of beliefs firmly etched in the national conscience of all of us.

We have a positive vision of the future founded on the belief that the gap between the promise and reality of America can one day be finally closed. We believe that.

This, my friends is the bedrock of our concept of governing. This is a part of the reason why Americans have turned to the Democratic Party. These are the foundations upon which a national community can be built. Let all understand that these guiding principles cannot be discarded for short-term political gains. They represent what this country is all about. They are indigenous to the American idea. And these are principles which are not negotiable.

Her theme was of our shared future and how we can shape it together. In her words:

A nation is formed by the willingness of each of us to share in the responsibility for upholding the common good. A government is invigorated when each one of us is willing to participate in shaping the future of this nation.

(I recommend viewing the video of the entire speech here).

As an aside, one of the bonuses of researching the life and the words of a great speaker is that there are generally quotes from other speeches that leave us nodding in agreement. This one in particular:

What the people want is very simple. They want an America as good as its promise.

For Barbara Jordan, that promise was personal:

“We the people” — it is a very eloquent beginning. But when the Constitution of the United States was completed on the seventeenth of September in 1787, I was not included in that “We the people.” I felt for many years that somehow George Washington and Alexander Hamilton just left me out by mistake. But through the process of amendment, interpretation, and court decision, I have finally been included in “We the People.”

America made promises in the founding documents of our country and has delivered on them in fits and starts over the years. One of the greatest promises, however, is that if you work hard and play by the rules you can get ahead.

That promise has been subverted by Republicans who feel that the promises of America were made only to the rich and powerful. Those Republicans are wrong.

As Rep. Jordan said: “the American dream is not dead. It is gasping for breath, but it is not dead.”

We need to focus again on America’s simple promise: the belief in what Barbara Jordan called our shared destiny and our ability to shape our future.

Together, we can change that future. In the words of another great American: Yes, we can.

Great Speeches is a series on speeches by American politicians.