The land along this portion of the creek had been cleared and farmed for many years until donated to the Whatcom Land Trust. For the past 15 years, the Land Trust, along with the local Chapter of the Audubon Society have been restoring the creek and wetlands with native vegetation that continues to attract a wide variety of local birds. It is now designated as the Harrison Memorial Nature Refuge.  This specific property is a five acre plot at the foot of Sumas Mountain in the foothills of the North Cascade mountains, about 30 miles northeast of Bellingham.

Previously, upland portions of the property were planted with native alder, fir, cedar, and birch trees to shade and provide habitat for birds and forest critters. This phase of restoration is pretty much accomplished except for maintenance.

The next phase which is ongoing involves planting up to 10,000 native plants along the wetlands and the creek in order to shade the water and crowd out the thick mat of the noxious weed, reed canarygrass that has taken over much of the area right down to the water’s edge.

Recently, the local Kendall Elementary School, which is just across an old dirt road from the creek signed on as a partner with the Land Trust and Audubon Society in the restoration and preservation of this plot of land.  This nature refuge will be an outdoor environmental education lab for Kendall students and likely for their children into the foreseeable future.

Over the course of Earth week each class in the school, some days one and some days two, traipsed about 200 yards from their playground to the site. Beginning on Earth Day (April 22) and running for the next 8 days, 11 classes from 2nd to  5th grades participated in planting Sitka Willow and Red-Osier Dogwood cuttings for about  2 hour stints.

Earth Day afternoon when our crew of volunteers met our class of 16, 2nd graders it was raining but no one was deterred in the slightest. This is the PNW after all.  After a few minutes of instruction by our supervisor in the what, why and how to plant willow cuttings, we all headed off to the wetlands, each adult with a team of three or four students. The students carried a three foot willow cutting in each hand.  Ava carried our dibble bar with which she demonstrated to the students how to poke a hole at least a foot deep into the matted canarygrass.

The students were eager to plant their own willows and after a while of just poking the stick in the ground, some insisted on running the dibble bar too. And they did. Surprisingly, no one was injured. They wanted total credit for their plantings and some of them kept close count of the number planted. But they can only attend to a repetitive task for so long at a time. The second graders, mostly the boys, but not only the boys, took advantage of the rain and the mud puddles. Although they had been encouraged to wear rubber boots, only two of the class did so. So, some of them finished their stint with mud up to their knees and waists. I have to wonder if the teacher let them back into the classroom and if so, who cleaned it all up.

I returned to this work site for another session the following week to work with a group of 5th graders. In contrast to the 2nd graders, this group did not go straight for the mud, although some did like wading in water. When their attention waned from planting, this 5th grade class became very industrious. In the previously planted upland part of the property, we were also cleaning up downed limbs and brush to clear the forest floor. We stacked this brush into large piles that would serve as habitat for birds and other local forest critters while also reducing fuel load in case of a fire by confining debris to isolated spots.  (The floor looked raked clean just like the president told Californians to do with its forests to prevent forest fire). These fifth graders took it upon themselves to also team up and to haul some pretty large logs to the stacks.

A quote from our Stewardship Director who orchestrated this project and was on site for all 11 classes:

I really enjoyed hearing the names for plants and worms they picked (Jiggly the worm, Jelly Bean the plant), hearing statements like “I want to stay out here and plant all day!” or “I want to go in the mud!”, seeing students helping each other out, and especially seeing the stick size escalate into the entire group working together to carry full-on logs.

In addition to the fun of planting willow trees and playing in the mud, the 2nd graders on Earth Day were treated to a bit of real nature drama with an eagle vs. osprey kerfuffle. An osprey was fishing in the pond and as soon as it came up with a nice fish and headed off for lunch, a bald eagle that had been watching came bombing down from its perch above the wetlands to steal the fish from the osprey.  In the tussle, the osprey dropped the fish back into the pond. Both tried unsuccessfully to retrieve it. Score 1 for the fish and 0 for the raptors. I only had my iphone and was too slow to get it all on the camera as it transpired so quickly. But I did get a shot of the osprey continuing to circle in hopes of the prey resurfacing. 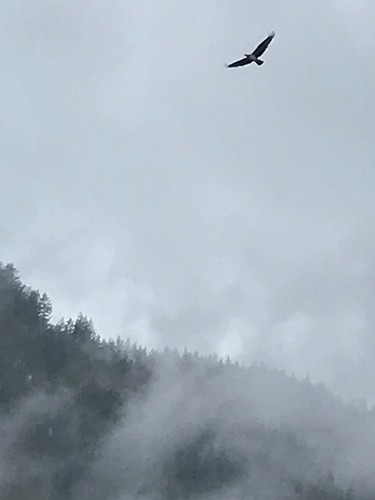 This avian encounter was a fitting end to this Earth Day restoration party. By Involving school children and the community at large with hands-on preservation of their natural resources  we wanted to encourage them to value it and perpetuate this stewardship of the land into the future.

That the kids loved digging into this nature reserve was but one measure of success of this enterprise. We actually got a lot of needed work completed.  Over eight days with 11 classrooms we tallied 510 volunteer hours including students and adult leads resulting in 2,360 Sitka Willows and Red-Osier Dogwood being planted. That is significant in that overall this particular five acre nature reserve has space for up to 10,000 trees. We got  nearly a quarter of those planted this year by these students.  In addition we cleaned up the forest floor and made several brush piles for wildlife habitat. Once the planting is completed the students will be involved in some maintenance and birding field trips led by the Audubon Society.

So far this venture appears to be working exactly as envisioned:  Stream restoration to support the salmon, creation of wildlife habitat, involvement of students and community in protecting their natural environment, kids enjoying being in nature and learning about nature.

A fun, educational and productive time was had by all.

Addendum: Something I learned in this process about Willows.

Willows are cool. With over 300 species worldwide, there are six species native the Pacific Northwest. We planted the Sitka Willow (Salix sitchensis) which ranges from Alaska to central California, mostly along the coast.

Willow is an excellent plant for this setting in that it is easy to plant, grows quickly to shade out and out-compete the invasive reed canarygrass. Its efficiency in growing is due to the fact that it provides its own rooting hormones from two active ingredients: 1. indolebutyric acid that stimulates root growth and 2. salicylic acid which triggers the plant’s internal defenses to pathogens. (the same salicylic acid associated with aspirin).

An onsite example of this rapid rooting process was provided with our cuttings. When we planted the willows in March, they were just bare sticks stuffed in plastic bags. We planted them in cold wet ground. Those that we did not get planted in March were kept in plastic  bags. In our month’s absence,  water got in the bags. By Earth Day in April, the cuttings sported numerous, 2” long roots protruding from the lower parts of the cuttings that had been in water and the tops had leafed out already. Given the soggy muck we planted them in, I am sure they took right off and if a plant can be happy, I am sure these were.