The Weekly Democratic Party Address was delivered by Congressman Dean Phillips of Minnesota reminding folks once again that the Democrats in the House have passed legislation #ForThePeople and it is being blocked in the Senate by Republicans.

(Rep. Dean Phillips (D-MN) highlighted progress House Democrats have made For The People, including the passage of H.R. 1, the For The People Act, an historic reform package to restore the promise of our nation’s democracy.)

When we passed the For The People Act, to loosen the grip of special interests on Washington, Mitch McConnell once again refused to act, almost certainly because he knows what keeps him in power: special interests and the unjust laws that disenfranchise way too many American voters.

We’re here to work For The People: to lower health care costs and prescription drug prices, to raise wages by building the infrastructure throughout our country and cleaning up corruption to make Washington work for you. 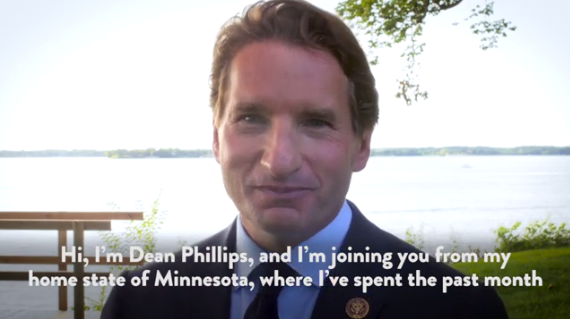 “Hi, I’m Dean Phillips, and I’m joining you from my home state of Minnesota, where I’ve spent the past month visiting with members of our community, both Democrats and Republicans, about what they want fixed in Washington.

“I ran for Congress because I was tired of the erosion of political discourse throughout our whole country and a government that too often places special interests before our common interests.

“Whether it’s protecting our communities from the dangers of climate change or protecting our loved ones from the risk of gun violence, it’s special interests who seem to always get in the way of sensible action.

“And, if what I’ve heard here in Minnesota is any indication, most Americans feel exactly the same way.

“We believe that campaign contributions should not be the ticket to representation – not in a democracy that works for everyone.

“Last fall, you sent a loud and very clear message to Washington by electing an historic Freshman Class of reform-minded Democrats.

“I’m really proud to be a Member of that class – and help lead the mission to clean up the culture of corruption in Washington and return power to people, where it rightfully belongs.

“And we got to work right away, introducing and passing H.R. 1, the For The People Act – an historic package of reforms that reduced the influence of big money in our politics, protects voters rights, secures our elections from foreign interference and increases the ethical standards for Members of Congress.

“That day, walking up the Capitol steps with my colleagues to vote on H.R. 1, was one of the most important and gratifying moments of my whole life – and the very beginning of a more transparent and effective Democracy.

“But, like almost every single one of the almost 500 bills we’ve passed in the House this year, the For The People Act ran into a very familiar roadblock in the Senate. His name: Mitch McConnell.

“When Democrats and Republicans came together to pass universal background checks for all gun purchases, Mitch McConnell refused to bring it up for a vote.

“And when we passed the Climate Action Now Act, to rejoin the Paris Agreement and take further action to address climate change, once again, Mitch McConnell wouldn’t bring it up for a vote.

“And when we passed the For The People Act, to loosen the grip of special interests on Washington, Mitch McConnell once again refused to act, almost certainly because he knows what keeps him in power: special interests and the unjust laws that disenfranchise way too many American voters.

“But it does not have to be this way. We have the chance, right now, to reject McConnell’s brand of politics – of putting a political party before our country and campaign checks before constituents.

“Now, he can try to stonewall our legislation, but he cannot stonewall your voice.

“We’re here to work For The People: to lower health care costs and prescription drug prices, to raise wages by building the infrastructure throughout our country and cleaning up corruption to make Washington work for you.

“And that’s why we need your help. You can make a huge difference by sharing your story or simply inviting people in your own community to have a conversation together, especially those who think differently than you do. For, by only listening, conversing, learning and respecting one another can we fix the most challenging problem our nation faces – our own divisions.

“So, I invite you to join us in the spirit of hopefulness, and I remind you that optimism is just as contagious as fear.

“Thank you. Keep the faith. And God Bless America.”

Since the House is in recess, there was no Thursday news conference by Speaker of the House Nancy Pelosi.

House members were busy in their districts but planning is underway for their return to Washington.

As House Democrats continue our successful drumbeat of action across the nation to “Own August,” I write with several important updates for our Caucus, Congress and Country.

First, I am grateful to all Members for your leadership in your districts to highlight the progress that House Democrats have made in our first 200 days fighting For The People, both through in-person events and on social media. You have made our legislation too hot to handle for the Senate GOP to block.

As we return to Washington energized and inspired to continue our fight For The People, the House continues to call on Senator McConnell to Give Us A Vote to pass the Bipartisan Background Check Act (H.R. 8) and the Enhanced Background Checks Act (H.R. 1112), which we passed in February. Returning early, the Judiciary Committee will mark up more legislation to address gun violence and the terrorism of white supremacy in America on September 4, including bills to ban high capacity ammunition magazines, help keep guns out of the hands of people who are a danger to themselves and others and prevent people convicted of misdemeanor hate crimes from acquiring firearms.

At the same time, the Congress continues to insist that the President reverse his short-sighted proposed State Department rescissions package, which is harmful to national security and is opposed by the Chairs and Ranking Members of the Committees of jurisdiction on a bipartisan basis. It violates the good faith of our budget negotiations as it seeks to override the Congress’s most fundamental Constitutional power of the purse and is illegal as stated by the Government Accountability Office.

I urge you to join a Caucus-wide conference call this Friday, August 23 at 3:00PM E.T. to discuss the latest developments on these important priorities, and to discuss our plan of action for the final weeks of the August District Work Period.

Thank you for your leadership during this important time for the Congress and the Country.

Speaker Pelosi reacts to the most recent act of cruelty by the Trump Administration: Statement on Indefinite Family Incarceration Rule

San Francisco – Speaker Nancy Pelosi issued this statement on the Trump Administration’s new rule, which would end decades-long, court-imposed protections for children and families at the border and allow for the indefinite detention of vulnerable families without basic standards of care:

“The Administration is seeking to codify child abuse, plain and simple. Its appalling, inhumane family incarceration plan would rip away basic protections for children’s human rights, reversing decades-long and court-imposed rules and violating every standard of morality and civilized behavior.

“The indefinite and prolonged detention of children would compound the cruelty and accelerate the heart-breaking humanitarian situation at the border, worsening conditions for children already forced to sleep on concrete floors, eat inedible food and be denied basic sanitation and standards of care. As the American Academy of Pediatrics has written, ‘No child should be placed in detention…even short periods of detention can cause psychological trauma and long-term mental health risks.’

“This inhumane and utterly unconscionable rule circumvents the conditions set in the Flores settlement, and we expect the District Court to swiftly strike it down. Democrats continue to call on this Administration to end its assault on families and children, and to join us to protect families and preserve America’s heritage as a beacon of hope, freedom and opportunity for all.”