The Weekly Democratic Party Address was delivered by Senator Tammy Duckworth of Illinois reminding us that #CadetBoneSpurs is not fit to be Commander in Chief.

(After President Trump’s devastating and reckless decision to abandon our Kurdish allies in Syria, which has destabilized the region and cleared the way for a Turkish offensive, Senator Duckworth (D-IL) shares her thoughts during this week’s Weekly Democratic Address.)

Maybe because of cowardice, maybe because of corruption, maybe both… Trump has broken America’s solemn promise to those who’ve sacrificed so much on our behalf, choosing to pander to an autocrat and clear the way for a Turkish offensive that has already left more of our allies dead and destabilized the entire region. […]

The list of consequences for our nation goes on and on, just as the list of fatalities will, as anyone who’s ever commanded a military unit will tell you that troops beyond Syria will be in graver danger as well because of the president’s incompetence. […]

With one decision… without any clear reason why… without any plan to deal with the fallout… Trump shredded our credibility, wrecked our foreign policy and endangered both today’s and tomorrow’s troops. 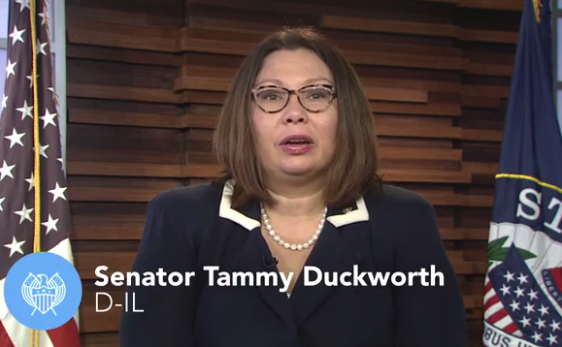 “Anyone who’s ever served in this region can tell you the beyond catastrophic consequences that are sure to arise if the bond between the U.S. and our local partners is broken.

“Over the past five years, American troops stood shoulder to shoulder with the Kurds, retaking ISIS’ caliphate inch by inch, foot by foot, town by town.

“And in the process, they became our brothers and sisters in arms.

“They bled for us.

“They died for us.

“They did the unimaginable on-the-ground work of fighting ISIS face-to-face—work that no one else in the world wanted to do.

“Yet now… maybe because of cowardice, maybe because of corruption, maybe both… Trump has broken America’s solemn promise to those who’ve sacrificed so much on our behalf, choosing to pander to an autocrat and clear the way for a Turkish offensive that has already left more of our allies dead and destabilized the entire region.

“And as the situation on the ground continues to deteriorate with every passing hour, he keeps lying to the American people.

“He keeps trying to minimize and hide the true horrors of what he has let happen.

“So let me tell you the truth:

“In the days since Trump’s decision, Bashar al-Assad has consolidated his brutal rule over swaths of northern Syria, while Russia has strode back into the region, filling the power vacuum we left behind.

“Our own troops have been shelled by Turkey, while we’ve likely lost the trust of any human intelligence assets in the region who once would’ve worked with the United States.

“More than 100 ISIS fighters have broken out of prisons that Trump all but physically unlocked… leading to real fears of a resurgent ISIS and greater odds that we’ll have to send troops back into northern Iraq to re-wage war over feet of sand that we’d previously won… trying to beat back the resurgent group along with newly-emboldened Iranian proxies.

“All of this happened in just the past couple of weeks… and all of it is because of Trump’s reckless decision to abandon our Kurdish allies.

“None of these outcomes puts America first.

“None of these outcomes makes America great again.

“They all weaken our standing on the global stage—and worse than that, they make our nation less safe.

“The list of consequences for our nation goes on and on, just as the list of fatalities will, as anyone who’s ever commanded a military unit will tell you that troops beyond Syria will be in graver danger as well because of the president’s incompetence.

“After all, who would want to partner with us now that they know that one phone call could convince Trump to sell them out to their enemies?

“Who would want to follow in the Kurds’ footsteps, losing thousands of their bravest, only to be betrayed—left to die without a second thought?

“If I were a Division Commander or Special Operations Commander right now, I would have spent the past few days brushing off my operational plans… because with no ally around to help shoulder our burden, we’ll have no choice but to send more American troops when ISIS regroups and raises their black-and-white yet flag once again.

“With one decision… without any clear reason why… without any plan to deal with the fallout… Trump shredded our credibility, wrecked our foreign policy and endangered both today’s and tomorrow’s troops.

“So now, we’re at a turning point.

“The stakes are climbing higher every day, with more Kurds dying, more ISIS prisoners escaping, more children fleeing, and Russia and Iran gaining more power with each tick of the clock.

“Bipartisan congressional majorities have spent the past two weeks pleading with President Trump to reverse the course he’s set us on. But it’s up to the president to stop trying to justify his bad decision and simply do the right thing.

“He needs to set aside his ego and actually work with Congress, our allies and the players in the region to come up with a long-term solution to piece back together the equilibrium he chose to shatter.

“Because I’m tired of Trump wrapping himself in the flag in the morning then abandoning our troops and our values by the afternoon.

“He has put our country, and the world, at a crossroads.

“So in this moment, he’d do well to show even an ounce of the bravery that our Kurdish partners have shown and start protecting American interests rather than ceding them to whichever autocrat calls him next.”

Speaker of the House Nancy Pelosi did not hold her weekly news conference on Thursday as she and her Democratic colleagues honored the life of Representative Elijah Cummings as he lay in state in the Capitol Rotunda.

Washington, D.C. – Speaker Nancy Pelosi joined Congressional Leadership and other Members of Congress for a formal Arrival Ceremony for Chairman Elijah E. Cummings to lie in state. Below are the Speaker’s remarks:

Elijah Cummings: son of sharecroppers, master of the House. It is my official and personal and sad honor to welcome Chairman Elijah Cummings and all who loved him to the celebration of his life.

Thank you, Maya, for giving us this honor to say goodbye to Elijah in this Statuary Hall of the House of Representatives.

Elijah was truly a master of the House. He respected its history and in it he helped shape America’s future. I have called him our North Star: our guide to a better future for our children.

Elijah has said that ‘our children are our living messengers to a future we will never see.’ For the children he wanted a future worthy of their aspirations and true to the values of America. It was in defense of the children at the border that Elijah said, ‘We can do better.’

It was he who mentored – he was also a mentor of the House. When we were deciding Committee assignments, he said, ‘Give me as many Freshmen as you can. I love their potential, and I want to help them realize it.’

As a mentor, he was always generous with credit, giving Members the opportunity to take the lead. He knew it was not only important to them, but the fresh eyes – their fresh eyes were important to any decisions we made about America’s future.

In his Chairmanship of the Oversight and Reform Committee, he lived up to the responsibility to exercise the Congressional power of oversight of Congress.

We say this to you as we are gathered here today in the old House Chamber where Lincoln served, beneath the same clock Lincoln heard ticking, under the gaze of Clio, the muse of history.

God truly blessed America with the life and legacy of Elijah Cummings.

Leaders – That’s why I’m very grateful to Leader McConnell, Leader Schumer, Leader McCarthy for agreeing to have Elijah lie in repose on the same catafalque that Abraham Lincoln lay in repose at his death.

May Elijah rest in peace.

On Friday, Elijah Cummings was laid to rest in his hometown of Baltimore.

From CSPAN, the full funeral video:

‘He never set out to be a giant, but he became one.’ — @RepKarenBass, chair of the Congressional Black Caucus, just gave this powerful speech honoring Rep. Elijah Cummings pic.twitter.com/8NjnOEkRqd

Representative Elijah Cummings fought for the soul of our nation. I join Americans across the country in mourning our collective loss as he lies in state today. pic.twitter.com/8ourDXraaM