There is a 700 acre stand of old growth forest sequestered in the foothills of the Cascade Mountains about 25 miles east of Bellingham WA, and about 10 miles west of Mt. Baker at the edge of the Mt.  Baker – Snoqualmie National Forest. I had long wanted to see and experience this ancient forest as it is one of the two largest such stands in the Pacific Northwest – the other being Grove of the Patriarchs in the Mt. Rainier National Park.  Around here old growth forest is revered as an endangered vestige of our natural world as it once was in the same way that other revered PNW icons, the Orca and the salmon are endangered.  And maybe for that reason, it is a good thing that this forest is not readily accessible to the public.

This old growth tract resides within a larger 2,300 acre parcel, currently owned in part by our county park system and is designated as a nature preserve that is technically open to the public. However, access is limited. The only access is via a system of gated and active logging roads owned by Sierra Pacific Timber company.  On occasion the Whatcom Land Trust, which initially orchestrated the purchase of this tract in 1998 and holds a conservation easement on those roads, can obtain the keys to the gates. Without access to a key, it is an additional 5.7 mile hike past the locked gate just to get to the trail head. 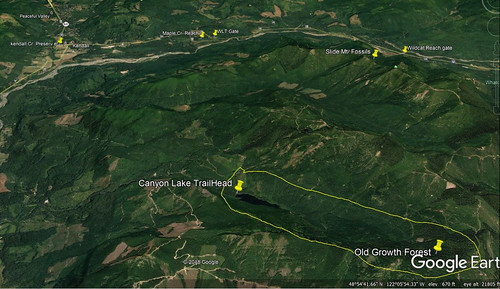 The yellow outlined area circumscribes the core of the forest with the lake and the trail head lower center and the old growth forest at the bottom right. The other yellow pins mark other Land trust properties that have been subjects of previous posts along the Nooksack river corridor that you can see running along the top of the photo.

As I contemplated this hike, I have to admit that I was in a state both of high anticipation and no small measure of trepidation – the hike was described as a 10 mile “strenuous” climb, with ~ 2,300 foot elevation rise. (It was indeed strenuous but not quite 10 miles)

This “Canyon Lake Community Forest” is now co-owned and managed as a preserve by the Whatcom County Parks Department for the preservation and recreational maintenance and by Western Washington University which provides educational and research input to the forest.  As noted above, the Whatcom Land Trust which initially orchestrated the purchase holds a conservation easement on the property to assist in maintaining its educational value and future preservation. 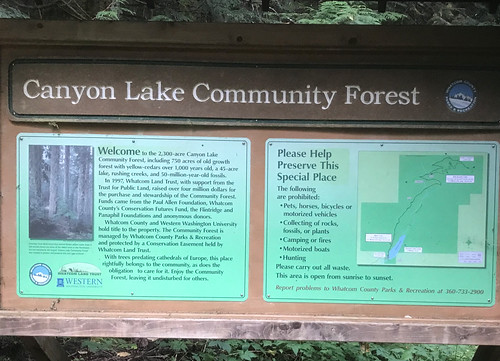 Sign at the trailhead describing the history of the forest

At one edge of this Community forest lies Canyon Lake that is a relative newcomer to the region. Geologists believe that it was formed approximately 150 years ago, when a massive landslide, probably precipitated by a 7.1 + earthquake in 1872 brought a hillside of ancient red cedar trees and sedimentary underpinning careening into the valley damming Canyon Creek. The result was a 45 acre lake backed up before Canyon Creek was able to squeeze by and continue its flow down the mountain to reach the North Fork of the Nooksack River. 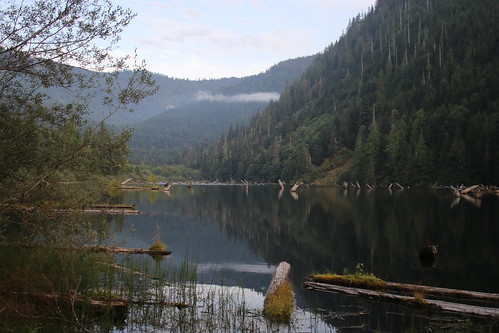 Remnants of that 150 year old slide still protrude from the lake as Western Red Cedar are highly resistant to rot and can maintain in water for as long as the initial tree was alive. The old growth forest lies near the top of the far ridge above the lake in the vicinity of the fog/cloud.

From the trailhead at the north end of the lake one can take a two mile lake loop hike or continue on up the canyon and canyon walls to the old growth forest. A short way up the trail we come to a fossil of a large palm frond, taken from this area that is a remnant of the Eocene epoch (33.7 to 56 Million years ago). At that time, long before the Cascade Mountains were formed, this area was a subtropical forest and flood plain. Its vestiges are readily visible with numerous fossils encased in sandstone, shale and other sedimentary rock that forms this Chuckanut Formation and that underlies much of this region and the Cascade foothills. 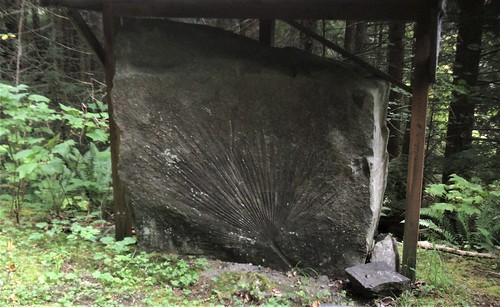 Palm frond fossil from the Eocene epoch, ~ 50 million years ago

I Previously described the origins of this Chuckanut formation and its plethora of fossils including a hike to Slide Mountain, where fossils now lie open to the skies, exposed by frequent slides (hence “Slide Mountain”)  a few miles east of Canyon Lake. See:  here, here, and here. These sedimentary based foothills have sloughed off their million year old layers and many have continued downhill and into the Nooksack River where they are currently easily accessible.

As we proceeded up the mountain side we could look across the lake  to the slope of the original landslide. Now we can see the scar of a more recent, although lesser slide and its slump extending nearly down to the lake. 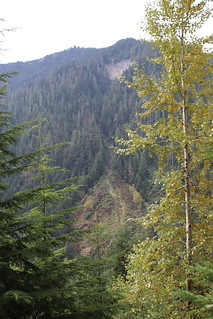 The initial part of this trail followed an old logging road up the mountain at their typical 17% grade. This part of the trail was well maintained, meandering and switching back through second growth timber with openings of more recent undergrowth of vine maple, alder, ferns, grasses and wildflowers. 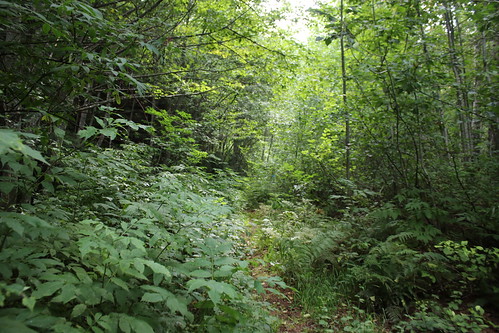 About halfway up we got a break in the vegetation and were able to see back down to the lake in the valley below.

Moving on, any open spaces not yet reforested were filled in with large runs of Goldenrod that is prevalent at lower to middle elevations.