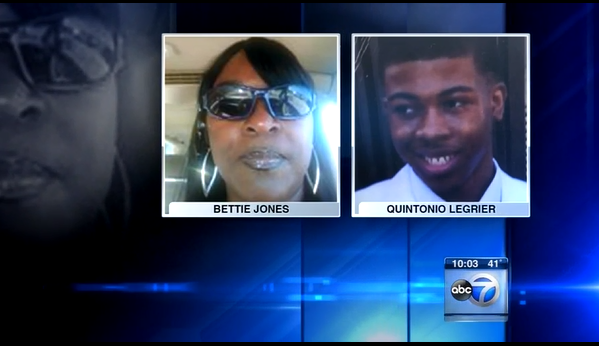 Why can’t police respond to domestic disturbances with stun guns or tasers instead of deadly force? Why can’t they find some way to disable a person who may be having a mental breakdown without killing him? And how the HELL does the woman in the first floor apartment get shot THROUGH THE DOOR by a policeman responding to a disturbance in another apartment. Chicago Police say that one was an “accident”. Oops?!?? Really? Tell that to her 5 motherless children and the millions of us who are wondering if black lives are simply collateral losses when cops are so scared that they have to shoot to kill instead of “serve and protect”. Add “mental illness” to the list of capital “crimes” that are punished by policemen being judge, jury and executioner.

In a city troubled by allegations of police misuse of force, a Chicago officer early on Saturday shot and killed a male college student and a mother of five, both black, and the police department later said the woman’s death was both accidental and tragic. […]

“Officers were confronted by a combative subject resulting in the discharging of the officer’s weapon which fatally wounded two individuals,” the police department said in a statement.

A woman, 55, “was accidentally struck and tragically killed,” it said, adding “the department extends its deepest condolences to the victim’s family and friends.”

A young man in his late teens, early twenties who has started to exhibit strange behaviour is quite possibly showing symptoms of schizophrenia and needs medical attention, not 7 bullets pumped into his body. Yes, a person with untreated mental illness can be dangerous but most mental illnesses can be managed with drugs if the person gets help instead of shot dead. Add “training in dealing with mental health issues” to the list of things that sworn officers need before they are given a gun and the right to be judge, jury, and executioner.

According to NBC 5, police fatally shot Quintonio Legrier, a student at Northern Illinois University, after responding to a call from Legrier’s father. Family at the scene say that police were called after Legrier threatened his father with a baseball bat.

However, Janet Cookery, Legrier’s mother, said her son suffered from mental illness. “He was having a mental situation. Sometimes he will get loud, but not violent,” Cookery told WLS-TV in Chicago.

Police shootings of people suffering from mental illness are a common occurrence. According to a Washington Post investigation, police shot and killed 124 people “in the throes of mental or emotional crisis” in the first six months of 2015. That accounted for nearly one-fourth of all police shootings in the first half of the year.

People around the victims often find themselves in danger as well. On Monday, a Georgia man attempting help his son who was in distress was fatally shot by police.