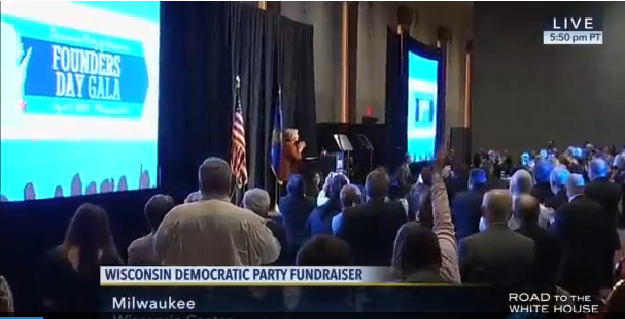 The purpose of the event was to raise money for the party as we head into the general election with the goal of electing another Democratic president, returning Russ Feingold to the U.S. Senate, and adding Democrats to the Wisconsin delegation to the House of Representatives. Democratic Party of Wisconsin officials think that there is a pretty good chance for Democrats to win back the state Senate and to narrow the gap in the state Assembly.

The full CSPAN clip is here and selected clips are below the fold.

Rep. Gwen Moore (D-Milwaukee) began with a barn burner. Rep. Moore reminds us of all we have lost over the past 5 years and recalls the role Wisconsin and Milwaukee played in looking out for working people and the oppressed.

Sen. Al Franken (D-MN) inspired the crowd (and made them laugh – a lot!) with stories of his father’s epiphany and how Democrats need to leave nothing to chance this fall.

Former Secretary of State Hillary Clinton spoke, leaving no doubts about what she thinks of Wisconsin Gov. Scott Walker and his hand-picked state Supreme Court Justice Rebecca Bradley. Wisconsin has a chance to reject his appointee and choose a justice for the people, Judge JoAnne Kloppenburg.

Liz Kreutz ‏@ABCLiz
“I am a proud Democrat, and I support Democrats up and down the ticket. Always have and always will,” Clinton says at Dem dinner in Milwaukee

Getting out the vote for Hillary in Wisconsin with my hero Cecile Richards and one of my favorite children. pic.twitter.com/sDWf0ELSw9