The Weekly Democratic Party Address was delivered by Rep. Zoe Lofgren (D-CA) discussing the SAFE Act, a bill to protect our elections.

House Democrats’ first act in the Majority was to advance H.R. 1, the For The People Act, which would help secure our elections.

Now, House Democrats are building on that progress with the Securing America’s Federal Elections, or, the SAFE Act, which takes decisive action to secure our federal elections from outside interference and brings our security into the 21st Century.

The SAFE Act represents an urgent, critical step to securing our election infrastructure and protecting the integrity of the ballot and our democracy. 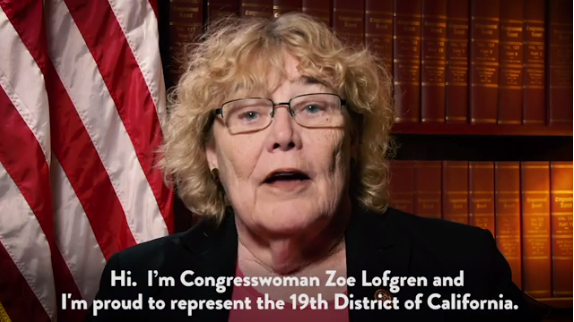 June 28, 2019
Washington, D.C. – Congresswoman Zoe Lofgren of California delivered the Weekly Democratic Address. In this week’s address, the Congresswoman highlighted House Democrats’ passage of the Securing America’s Federal Elections (SAFE) Act to address the urgent need to strengthen election security and prevent foreign interference in the 2020 election. Below is a full transcript of the address:

“The Mueller report made clear that our country suffered ‘multiple, systematic efforts to interfere in our election’ in 2016.

“The report details that Russian Military GRU officers: ‘targeted individuals and entities involved in the administration of elections. Victims included U.S. state and local entities, such as state boards of elections, secretaries of state, and county governments, as well as individuals who worked for those entities.’

“We now know that all 50 states were targeted in this attack.

“In Illinois, the Mueller report confirmed that the Illinois Board of Elections network was hacked.

“In Arizona, malware was installed in the State elections’ website.

“Voters in Georgia and Texas saw electronic voting machines deleting votes and switching them to other candidates.

“We should all be able to agree that we need to protect our democracy, and with a sense of urgency.

“This is not a partisan opinion. Nothing less than our national security is at stake.

“That is why Democrats’ first act in the Majority was to advance H.R. 1, the For The People Act, which would help secure our elections.

“Now, House Democrats are building on that progress with the Securing America’s Federal Elections, or, the SAFE Act, which takes decisive action to secure our federal elections from outside interference and brings our security into the 21st Century.

“The SAFE Act represents an urgent, critical step to securing our election infrastructure and protecting the integrity of the ballot and our democracy.

“Yet, the President openly invites foreign interference and refuses to hold Russia accountable for its continued efforts to undermine our elections.

“House Democrats will continue to honor the oath we take to defend America’s security against all threats, both foreign and domestic.

“As American families across the country prepare to celebrate our nation’s independence this Fourth of July, we call upon Leader Mitch McConnell and the Senate to join with House Democrats and pass these essential, bipartisan bills.

“Together, we can and must defend our national security.

“This July Fourth recess, House and Senate Democrats will launch a Week of Action to highlight the beauty of our democracy and the urgent need to protect it from foreign interference and safeguard it for years to come.

“There’s no time to waste.

“Thank you, and Happy Fourth of July!”

Last question from Chad as I was leaving, ‘Who’s going to win, the Democrats or the Republicans?’ And I answered, ‘The children.’ I thought you were asking a different question.

14‑7, I like it like that. The trophy is beautiful. The only thing is that it took a long time, the game. We missed, many of us, the original presentation of the debate.

But everything about it looked really good – in terms of us being very proud of all of the Democrats who put themselves into the arena – to be continued tonight.

We just are getting a mixed review on the Senate on the, excuse me, the Supreme Court on the Census. It appears now that they’re sending it down to, perhaps a lower court, because the Chief Justice – now this is all reporting, so I’m getting it from you – is saying that there wasn’t sufficient justification from the Commerce Department for the citizenship question. There could be justification, he says, so let’s go see what that is.

First, we heard they ruled in favor of the question, but then, now, it’s a little bit of a different question. But, that is all to say, that we have to make sure, whether that question is on there or not, and I certainly hope it is not, but whether it’s on there or not, that the American people come forward and be counted.

It would be a sad occurrence if people said, ‘Well, since that’s on there, I’m not going to be counted,’ because it means so much in terms of who we are as a nation, in terms of what makes up America, who are we and how do we address the needs of the American people. And, by the way, how do we reapportion seats in the Congress of the United States so that people have the representation that is justified by their numbers.

Here we are, right now on the Floor we are voting – debating the SAFE [Secure America’s] Federal Elections Act. This is part of H.R. 1. We’re taking some of it in pieces.

We see no reason why this should not be bipartisan – paper ballots, funding to fortify our voting machines and the rest, and addressing the cybersecurity concerns that we have.

I salute Congresswoman and Madam Chair, Zoe Lofgren of California, Chair of the House Administration Committee. This is step one. We’ll have more legislation. Mr. Bennie Thompson, Chair of the Homeland Security Committee, has been working on this issue, and there will be other legislation.

This happens to be the jurisdiction of the House Administration Committee, and it is exactly, word-for-word the same as a Senate bill.

And, right now, we’re faced with a situation where we can do much better for the children. I always am fond of the phrase, ‘You’re in your mother’s arms.’ That’s one of the most reassuring and comforting phrases for a child, that everything’s going to be okay – in their parents’ arms, mother and father, family.

So, what we were just hoping to do is to have an improvement on the Senate bill for the children. For the children’s health, we must have a higher standard of medical attention for them, as well as for their hygiene, their nutrition and for the training of the personnel who deal with – who address their needs.

For the children, for their safety, we want them not to have to be in an influx center longer than 90 days so that they can safely be placed with family or other opportunities for their safety – 90 days. And, that in those influx facilities, that the contractors who are hired, if they don’t live up to the standards of the influx centers, that they would be terminated after 6 months.

For the children, we want to reimburse all the faith‑based organizations, local governments, even the Armed Forces – the states, the state for the funds that had been spent to protect the children and their families.

So, these are very simple things: for their health, as I said, for their safety, for their well‑being and for their comfort. We want – we’re hoping to have this model, really a pilot program, of a place of cultural, linguistic, religious comfort level for the children where they can be in a migrant processing center that is, like I say, for the comfort of the children.

My view, as many of you know, I would be considered one who’s not inclined to violence and war in any way, but if you start endangering children, I become a lioness. You get near those cubs and it just evokes a response that is natural. And as a mother of five, grandmother of nine, I just feel that way about all children. I know what opportunities our children have. We want all children to have those.

So, all we’re saying there is, for their comfort, for their safety, for their well‑being, for their health, we can do so much more. It will only take a few minutes in conference. These issues are not unknown.

So, this isn’t about threats or challenges or anything like that. It’s only about humanity and the courage to do what is right for the children. It’s not – it wouldn’t take a long time, but it would make a big difference.

And, that is what I’m very proud of our colleagues for what we voted on the other day. A conference is a compromise, and so we would suspect that that would be part of our conversation. But, for some reason, the Senate Republicans have decided they don’t want to go there, and I think that the public should know that.

I had a very good conversation with the President. I think he would have been well disposed, but now he’s in Japan. So, hopefully I have a chance to share our religious values with Vice President Pence this morning.

And what else is happening? Okay.

And we will hear, on another note, we will hear from Special Counsel Robert Mueller on July 17. We look forward to hearing that from him.

San Francisco – Speaker Nancy Pelosi issued this statement following the Supreme Court’s announcement that it will hear arguments over whether the Trump Administration’s decision to end the Deferred Action for Childhood Arrivals (DACA) initiative was legal:

“Seven years ago, the DACA initiative empowered courageous young Dreamers to come out of the shadows and pursue their American Dream as students, teachers, doctors, servicemembers and entrepreneurs, strengthening our communities and enriching our nation in the process. In rescinding DACA and its vital protections, the Trump Administration forced hundreds of thousands of brave young men and women to live under a cloud of fear and uncertainty. The Supreme Court must now uphold the rulings of lower courts across the country, which have determined that the Trump Administration’s cruel decision to terminate DACA was illegal.

“This month, House Democrats overwhelmingly passed H.R. 6, the Dream and Promise Act, to protect Dreamers and Temporary Protected Status beneficiaries by providing them with a pathway to citizenship. The Republican Senate must honor the will of the American people and pass this critical legislation.

“House Democrats will continue to work to fix our broken immigration system with comprehensive immigration reform that honors our values as a nation of immigrants and our responsibility to secure our borders. The beautiful contributions that our Dreamers bring to our communities have made America more American. We will continue to fight tirelessly to protect these outstanding young men and women as we work to ensure America remains a nation of hope, freedom and opportunity for all.”