The woman in the hospital bed hadn’t spoken for days. She would neither eat nor drink. She was concentrating on the difficult work of dying.

Fiona arrived in the morning, her arms full of daffodils. She bent to kiss the cheek of the dying woman. “Mother, it’s early April still. The branches of the trees are just beginning to turn green—you remember that fuzzy, half-dressed look they have in the early spring? I’ve brought you some daffodils from the front yard of your house.”

There was no response, and Fiona expected none. Her mother was taking leave of life so the signs of spring made no difference to her. The CD player on the windowsill of the hospital room was playing “Un Bel Di,” one of Elspeth’s favorite songs.

Elspeth’s eyes remained closed. Fiona, noticing that her lips looked dry, took the small tube-like device that ended in a miniature sponge and squeezed the tube to moisten the sponge with water. Gently she stroked the sponge along her mother’s lips and inside her mouth.

Her mother stirred. Then her eyes opened and she looked straight at Fiona. “Take me home to the heather. Promise to take me home!”

Fiona squeezed her mother’s hand to show she understood. “Yes, Mother, I promise.”

Ever since the awful diagnosis of the disease that would end her life, Elspeth had insisted that she wanted to be cremated. “The earth belongs to the living,” she said. “And I want my ashes scattered on the heather-covered hills in the country where I was born.”

Fiona knew that although her mother had happily consented to live in America after her marriage to the handsome American engineer she’d met in her home town of Aberdeen, she still yearned for the scenes, the scents, and customs of her native Scotland.

At the end of January every year she carefully prepared the “Bride bed” for Bride, Scotland’s Goddess. “It’s pronounced “Bree-jeh,” even though it’s spelled like the word for a woman who’s getting married,” she’d explained when Fiona was old enough to question the difference between the pronunciation and the spelling. “See, we take this corn husk dolly, named Bride, just like the Goddess, and put it in this little cardboard bed I’ve made. Then we put the dolly on the altar next to a bowl of milk, because that’s what Imbolc is all about: the name comes from the Gaelic for “ewe’s milk,” because this is the time of year lambs are born. And it’s pronounced “Im-MOLG” because nothing in Gaelic is ever pronounced the way it’s spelled.”

Fiona had grown up celebrating the customs, in a mildly interested way, along with Elspeth. She approved of many of the Imbolc rituals, such as cleaning the house, planting seeds, and collecting blankets to give to the needy. “Under Her blanket of snow, new life is stirring in the Earth,” Elspeth would say. “The seeds we plant will grow into the light when the snow melts.”

The CD player ended its playlist. In the silence that filled the room, Fiona heard a horrifying noise, like a rattle, from her mother. She turned terrified eyes on the nurse who had just entered the room. “Yes, the dying are known to make that noise,” the nurse said. “It’s because they’re too weak to swallow their pharyngeal secretions. She might pass at any time now.”

Fiona sobbed, feeling the tears trickle down her face on to her shirt. Her mother was passing, her mother that she adored, who’d been her best friend as well as her parent. Life would never be the same. The death of Joel, her father, had been hard as well, but at least her mother had been there to comfort her.

The nurse patted her on the shoulder. “Why don’t you go to the lounge for a cup of coffee? If you want to, that is. I can stay with her while you’re gone. I need to check her vitals anyway.”

Fiona regained control of herself, rose from her chair, and nodded. “Thank you. I’ll be back in a few minutes.”

When she returned the nurse rose from her chair, her face grave. “Your mother has passed away. I’m so sorry.”

“Oh, no! Oh, why did I go to get that coffee? I should have been here!” Fiona felt her throat beginning to swell again with grief.

“The dying have been known to pass when their loved one is out of the room,” the nurse said gently. “It’s as if they want to spare them.”

Fiona took one last look at her mother, then turned to face what had to be done.

Even in the midst of handling the cremation, the memorial service, and the hundred other tasks attendant on a death, Fiona found time to call her mother’s sister in Scotland. Her Aunt Rowan, who still lived in Aberdeen, was silent for a few moments when Fiona told her the news.

“Aye, even when we expect it, death hits verra hard. I’m sorry, lass. I know you loved her greatly.”

Fiona said, “She wanted me to bring her ashes back to Scotland.”

“As soon as possible,” Fiona said. “My new job in Japan starts in June and it’s the end of April already. Mother wanted her ashes scattered on a hill—a heather-covered hill.”

“Weel,” Aunt Rowan said slowly, “there’s nae heather until August and September. If ye come in May before ye leave for Japan, there will be no heather on the hills.”

Fiona felt a pang. She had promised her mother! No more than she could break the contract she’d signed to teach English for two years, beginning in June, could she renege on her promise, her mother’s dying wish.

There was no one else to perform the task for her. She would have to go to Scotland with her mother’s ashes, heather or no heather. Her heart ached that she would not be able to carry out Elspeth’s wishes, but equally, she could not break her contract. She was required to be in Japan through the rest of the year before taking any time off.

Fiona sighed again, then reached for her phone to call the airline regarding the rules for carrying ashes aboard a plane.

A week later, after satisfying all the rules of both governments and the airline, she boarded a flight to London, and another from Heathrow to Aberdeen.

Rowan was there to meet her, waiting in the arrivals section with a sign that read, “Fiona Ainsworth.” Her face lit up when Fiona walked up to her.

They hugged, waited for the luggage carousel to reveal Fiona’s one suitcase, and then drove to Rowan’s house in her small car. The box of ashes was in Fiona’s carry-on luggage. She hadn’t wanted to trust it to the vagaries of the airline luggage handlers.

Later, comfortably ensconced in the room Rowan referred to as “the sitting room” with cups of tea and plates of Dundee cake, Fiona told her about Elspeth’s devotion to Bride and Bride’s particular festival on the first day of February.

“She always did have a soft spot for Bride,” Rowan agreed. “Tell me, did she ever make a dish called ‘Forfar Bridies’ when you were growing up?”

“Oh, yes,” Fiona said, smiling. “I suppose it’s the Scottish answer to Cornish pasties. Dad and I loved them.”

“Forfar Bridies do contain minced beef, like pasties,” Rowan said. “But we eat the neeps and tatties alongside the Bridies, not inside them.”

They discussed Scottish cuisine for a few more minutes, then Fiona said, “Tell me, when can we go to the hills and scatter Mother’s ashes?”

Rowan thought for a moment. “A drive out to Royal Deeside would be best,” she said. “Mind, as I told you before, there will be no heather on those hills in May. I wish you could have come in August—it’s a grand sight, the heather! Purple-covered hills as far as the eye can see.”

“Well,” Fiona said as she rose to collect the used cups and plates to take to the kitchen, “It can’t be helped. I wouldn’t be able to get the time off in August.”

Fiona shrugged. “I’m not sure. But never mind. We’ll go and fulfill at least part of Mother’s last wish.”

The next day was a rare one for Scotland—a still, shining day with a blue sky and gentle sunshine. “Wear your jacket, lass,” Rowan instructed. “For all it’s May, it can be cold out there on the hills.”

The two of them drove sedately to Royal Deeside. The box was packed carefully in the boot of the Rowan’s car.

After an hour of traveling, Rowan turned the car into a lay-by, and parked. Then she and Fiona left the car and opened the boot to get the box of ashes.

They walked a little way up a path that wound past large brown boulders. Then they stopped, staring in amazement. 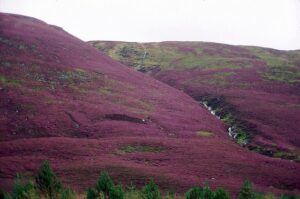 The gently undulating hills ahead of them were covered in purple heather. The purple stretched as far as their eyes could see. In May.

After a moment, Rowan turned to her and grinned. “Weel, lass, we know whom to thank for this, don’t we?”