Yesterday, President Obama took a break from his August vacation to speak at a Democratic Party fund-raiser. Here is what he wanted to warn us about: 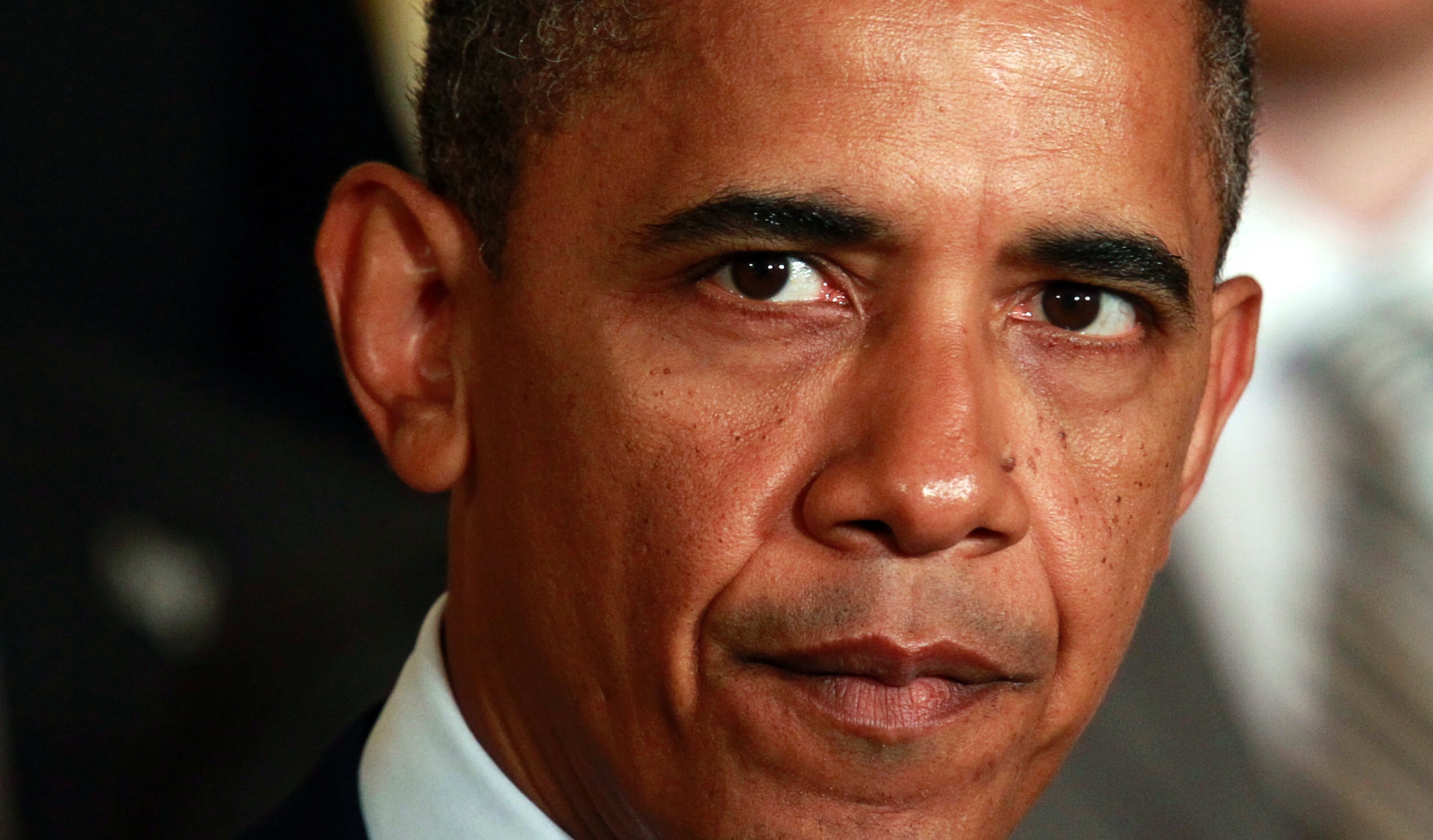 President Obama: “This is my serious face”

Democrats are giddy over the latest polls and the projections showing a shellacking in the electoral college. But here are the words that accompany each poll:

“If the election were held today …”

Guess what? The election will NOT be held today – it will be held in late October when early voting starts in many states and it will be held on November 8, 2016 when most of us go to the polls and cast our votes.

Polls that measure our preferences do not elect a single person. But what they can do, if we don’t stay focused, is lull us into a false sense of comfort.

So listen to President Obama and “Stay Scared” until the job is done. That will be when the polls close in each time zone on November 8, 2016.

(Full text of the president’s remarks are below).

Remarks by the President at DNC Fundraiser

THE PRESIDENT: Well, with an introduction like that I should just stop now. (Laughter.) Carol, thank you so much. And, Hank, and to the entire Goldberg clan — there are all these gorgeous Goldberg kids running around somewhere. And what a wonderful time to be here.

I see some really wonderful old friends who have been with us through the incredible journey, and I see some new friends. I do remember that event at Eli Segal’s. And Eli was such a great American and had provided such great service to the country, and obviously he’s missed. But in some ways, his spirit lives on through all of us. A lot of the work that we’ve pursued during the course of this administration reflects the values that he worked on so valiantly for so many years.

I’m here because we’ve got an election. And although Michelle is very strict about me actually taking a vacation when I get a vacation, she gave me a special dispensation for this evening because she understands, just as all of you understand, how important this is.

It’s important because we have made extraordinary progress over the last eight years on a whole range of issues. The economy, which was on the verge of collapse when I came into office, is, by almost every measure, better than it was eight years ago. Unemployment has been slashed by more than half. Incomes are up. Wages have begun to go up. We have seen 20 million people get health insurance that didn’t have it before. We have doubled our production of clean energy. We are as close to energy-independent as we’ve ever been. We are seeing record graduation rates in high school — and college enrollment rates.

There’s a lot of good news out there. And I could not be prouder of the part that our administration played in helping the American people rebound from what was an extraordinarily difficult time. But what is also true is we’ve still got a lot of work to do. Our job is not finished. There are still too many people out there who, if they have a job, don’t make enough money to get beyond the worries of paying their bills at the end of the month. There are still people who don’t have health insurance — not because we haven’t tried, but because you have governors who have been resistant, or a Congress that has not wanted to work with us to close those final gaps in coverage that are so necessary.

Despite the extraordinary work that we’ve done in mobilizing 200 nations to, for the first time, tackle climate change in a comprehensive, aggressive way, we’ve still got a long way to go before we’re out of the woods on that one. And that is a genuine existential threat that we all face and, more importantly, our children and our grandchildren face.

We still have too much violence in our society. There are still conflicts not just in the Middle East but around the world. And given the rapidity of change, the pace of change that’s taken place, it is absolutely critical that we have a capable, visionary, hardworking, diligent, smart, tenacious leader in the Oval Office. And that’s Hillary Clinton. That’s who she is. (Applause.)

Now, a lot of you were at the convention in Philadelphia, and so you heard me and Joe Biden and Michelle and others make the case — and you heard Hillary make the case herself. I’m not going to belabor it. I want to spend most of my time with questions.

The main thing I want to emphasize is that this is somebody who I know and I have worked alongside for many years. And, look, I’m a Democrat, and so it’s fair to say that whoever the Democratic nominee was I would want to get behind them. But I don’t display the kinds of enthusiasm and energy and commitment to Hillary’s candidacy just because of the fact that we belong to the same political party.

When I say that she knows what she’s talking about, it’s because I have seen her do the work. When I talk about her work ethic, it’s because I’ve watched her travel around the world and, at a breathless pace, manage a whole range of conflicts and open up opportunities that have resulted in American national security interests being served. When I tell you that I’ve seen how she works not just with me, but with her staff and people below her in a way that is full of integrity and seriousness and good humor, it’s something that I’ve witnessed on a day-to-day basis.

And as I said at the convention, you don’t know ahead of time how you’re going to turn out as President. You don’t — you figure, “I seem to know what I’m talking about — (laughter) — I think I have a good sense of what’s involved.” But until you sit at that desk and you’re making life-and-death decisions and you’re deploying young men and women to war, or you’re having to avert a crisis that can affect millions, or, in some cases, billions of lives, you don’t know how you’re going to respond.

But I will tell you that I have as good a guess when it comes to how Hillary will respond as I would of anybody’s, because I’ve seen her under really tough-pressure situations. And that’s what’s needed right now.

What I also know is the passion that she feels for making sure that ordinary people in this country get a hand up, get a break; that somebody’s fighting for them. Now, she’s not always the flashiest. She’s not always the person who’s going to give you the big stem-winder. But she is the person who’s going to do the work. And whether it’s her advocacy for children, or her advocacy for health care, or her advocacy on behalf of equal pay or making sure that we’ve got child care for families that need it — she hasn’t just talked the talk, she’s walked the walk for decades. And my grandmother used to tell me, you want to judge how somebody is going to do, look at what they’ve done. (Laughter.) And she’s done the work.

So look, I know this is not an audience where I need to make a hard sell. (Laughter.) To some degree, I had you at hello — (laughter) — when it comes to voting for Hillary. What I do want to emphasize is needing a sense of urgency and finishing the job of getting her elected. And you notice I haven’t said much about her opponent. (Laughter.) Frankly, I’m tired of talking about her opponent. I don’t have to make the case against her opponent because every time he talks he makes the case against his own candidacy.

And Democrats are interesting creatures. We tend to veer from full-fledged freak-out, and “the world is ending and everything is terrible,” which — I had conversations with some of you about three months ago, and it was — the world was ending — (laughter) — to, “it’s going to be fine” and “who do you think she’s going to appoint for Commerce Secretary.” (Laughter.) And what I’d like us to do is veer somewhere in between those two extremes. (Laughter.)

So we’ve got to be aggressive in our campaigning for 80 days. And that’s not a lot. But when you think about the stakes, there’s nothing more important. This is a group that has been extraordinarily fortunate. By definition, if you are here, you’ve had a blessed life, and your kids have been bequeathed and your grandchildren have been bequeathed extraordinary good fortune. But as fortunate as you are, if we have a society of growing inequality, if we have a world where oceans are rising and droughts and famines are common occurrences, and millions of people are being displaced, and refugees are trying to find refuge someplace and crossing oceans and dying because they have no choice — all of us will be poorer for it. This will not be the kind of world that we want for our kids and our grandkids.

And to invest 80 days to make sure that we at least have a leader in the White House who understands that — not because they’re going to be perfect, not because Hillary is going to solve every problem, just like I wasn’t perfect and I wasn’t able to solve every problem — but at least somebody who understands what’s required and every single day is waking up and making best efforts to do it — if we’re not willing to invest 80 days to make sure that happens, then shame on us.

So we’ve got to work. And I don’t want to hear it about whether “I’m not sufficiently inspired,” or “we’ve got this in the bag,” or “I’ve got other things to do.” You’ve got to work for 80 days. And I’m glad to see some young people here. I hope you volunteer and get involved in the campaign and do your part. And if you do, then I continue to be, as I said in Philadelphia, extraordinarily optimistic about this greatest nation on Earth and the prospects for our future.

Thank you very much, everybody. Thank you. (Applause.)