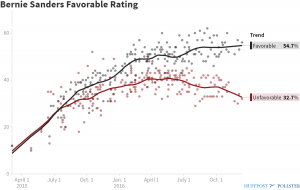 I’ll tell you what it means. It means that Bernie is getting the approval of an awful lot of Republicans, Independents, centrists, moderates, et cetera. If you shave a couple, three percent (but no more than that IMO) off the unfavorable slot that I’d attribute to Democratic partisans, too, it’s even more impressive.

No. It means none of that. It means that, whatever those voters thought or think of the issues that Bernie was championing, they were absolutely all-in on the values he stood for. And let’s be clear- there’s a huge difference between those issues. By God, if this election didn’t illustrate that succinctly, I don’t know what would.

Let me put it this way, because I live in rural Virginia, in the deep heart of Trump county, and I hear all the time that people would’ve absolutely considered voting for Bernie. Disconcertingly, a lot of ‘em are more broken up about how he was “done wrong” then most Democrats are. Sure, you get a few assholes who chortle, posting pictures on Facebook of, like, two dogs tearing up a room with the captions “The Russians did it!”. Ho ho ho, so funny. They’re the folk in that 33% disapproval rating above, die-hard partisans who put party over country. But surprisingly, a lot those folks actually do think that the DNC’s supposed actions towards Bernie are as bad if not worse than the Russians’ attack on our country’s electoral process.

And the reason for that all ties back into values. Because, first of all, most folks don’t have any concept of how big a deal the Russian interference into the election was, or what “hacking” entails. For a majority of the country, I’d say, they equate that to the sort-of thing you see on CSI or somesuch program. So keep that in mind when you’re inclined to get worked up about them “not caring” about it. Secondly- and more importantly, in my opinion- it’s because Bernie was a stand-in for the sort-of values that they stood for. So an attack on him (even if you argue the merits of were mostly overblown) was an attack on them, too.

What values does Bernie stand for? Well, the biggest one this year, I think, was the anti-establishment value. Bernie certainly exhibits more values than just a rote “rage against the machine” vibe, let’s not sell him short here- like fighting for working folk, or standing up against “big business/pharma/bank/etc”- but the anti-establishment message was clearly the driving force of the election this year, and is certainly the reason that Mr. Trump won.

This is another reason why I found myself unable to ever consider returning to the Republican party. Because issues changing; that’d be one thing. But, values… values are supposed to be immutable. The values I was always told we stood for as Republicans and conservatives were thrown aside as soon as Donald Trump demanded fealty, demanded personal loyalty above all else. And the people I’d looked up to for years, who had railed against Obama, the Democrats, et cetera, on similar grounds, just laid down and said, “Yes, sir! Anything you say, sir! Trump uber alles!”

I recently posted a diary that sort-of touched on this issue, where I argued that a new breed of Blue Dog could save the Democratic party, and the country- and I think that this is a perfect addendum to that missive. There were more than a couple people in the comments section there, braying about “neo-liberal” or “republican-lite”. Well, I got news for you, folks; rural Virginia is never gonna be 5th Avenue NYC. But there are lots of common values we can absolutely share across those lines, I promise you. There’s a progressive message in the values that Bernie stood for that echoes across partisan lines, and is a WINNING message. One of the places I crossposted that diary, a commenter named Anonymous is a Woman touched on that very succinctly; I’ll simply link to her words since they far and away outshadow my own. It’s why I feel very strongly that a new Blue Dog coalition, a coalition of loveable mutts- as opposed to the purebred, horrifying creatures most of the old school of “Blue Dogs” represented- is the key to taking back the country.

Last, I’d like to leave you with this little ditty to ponder: an organization achieves the results that it is optimally designed for. This is an immutable fact, no matter what sort-of organization you apply it to. Like, say… the Democratic National Committee, at the state and national level.

If we ignore this fact, it’s to our own peril; to the entire country’s peril. Our leadership is still in shock- what leadership there is, which I don’t see much of now, which is it’s own problem. Nature abhors a vacuum. They don’t last long. If we don’t learn these lessons, fast, and then move on from them- if we don’t find new leaders who are able to recognize that, and help us move forward. Because we saw in November the sort-of results our organization is optimally designed for.

And we’re on the precipice right now, folks. Let’s not mince words here- there’s a chasm we are teetering over, and it’s our response to that fact that will determine whether we fall into the abyss or continue marching up the mountain. And it’s going to take every damn one of us working our asses off to achieve that goal.

But we absolutely can achieve it. It’s not gone yet; it’s not gone unless we all decide to go belly-up and lay down, the way