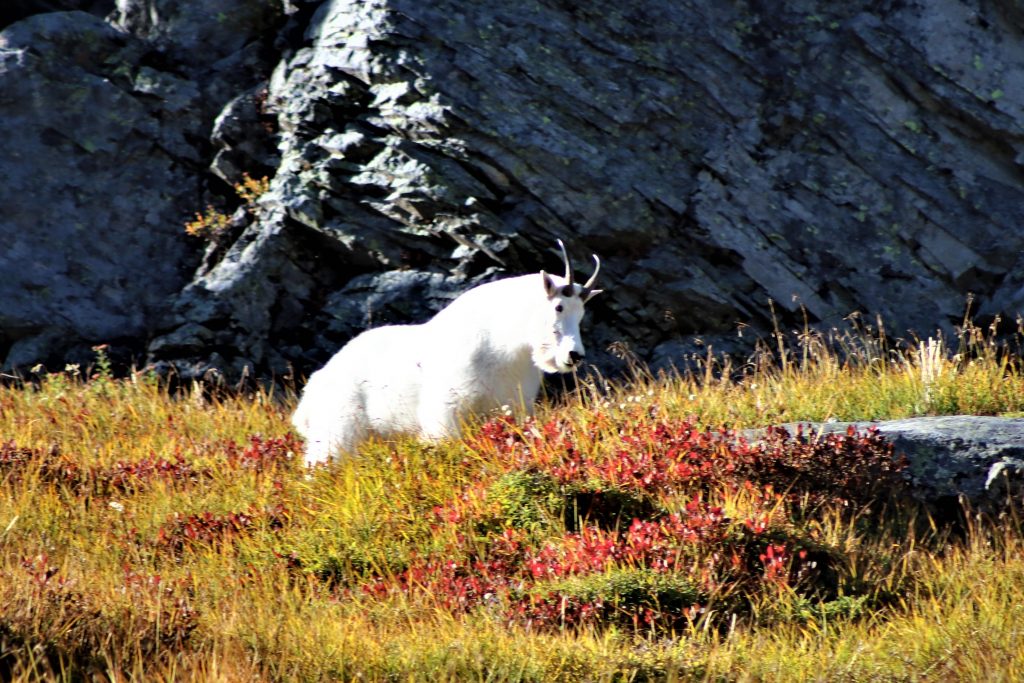 After fog and snow-pack thwarted an August attempt to hike into the Mt. Baker Wilderness Area I returned with my sons in October in hopes that the snow would have receded and and fall colors would be out. On our previous trip we retreated to a lower elevation where we were fortunately treated to an amazing display of  wild flowers that I posted last month.  Now, six weeks later the snow was off the trails and It was about as beautiful a fall day as one can hope for in this natural wonderland of brightly painted foliage of reds, purples, and oranges. And then there was the backdrop of two brilliant white mountains. And to top it off, we were treated to a brilliant white Mountain Goat within photo distance from the trail, that you see above.

As it turned out, this was the last clear day where this particular area was accessible by road. Three days later the State Department of Transportation closed the gate just past the ski area, blocking access to the very steep last two miles to the trail head. Snow was on its way and this area accumulates snow like no other. The Mt. Baker Ski area which is  about 800 feet lower than where we were hiking holds the world record for snow fall in a single season at 95 feet recorded during the 1998 -1999 season. It also has the highest annual average snowfall of any ski resort in the world. The road to Artist Point is typically open from sometime in July until September and sometimes into October but occasionally, it does not open at all. 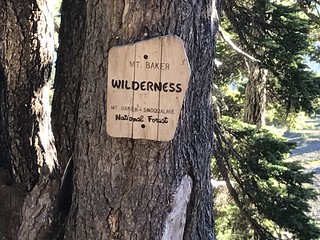 A couple of hundred yards from the parking lot, we entered the Mt. Baker Wilderness Area where we hiked on trails cut through huge scree slides and volcanic rock . 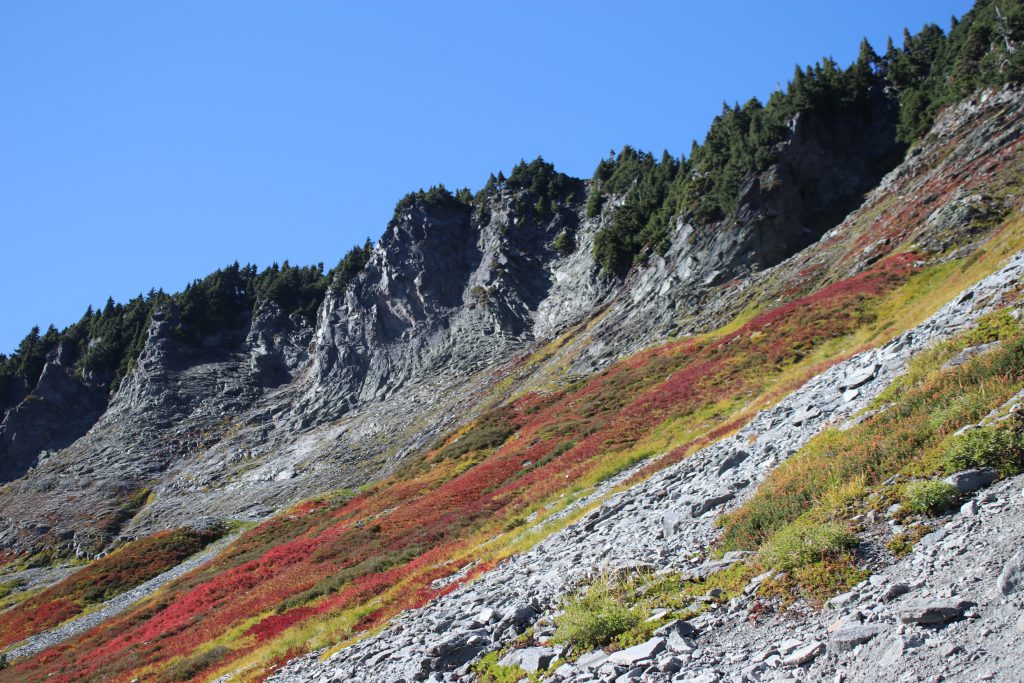 From the trail: Scree, foliage, and cliffs on the south side of Table Mountain

Although there are two to three thousand mountain goats in the North Cascades it is relatively rare up here to see one up this close. Typically if you see any at all, they are miles away and can only be seen with a spotting scope. This one was grazing about 100 yards up hill from the hiking trail and seemed to be finding good grub as he hung out in the area for several hours that afternoon as we and other hikers came and went on the trail below it. 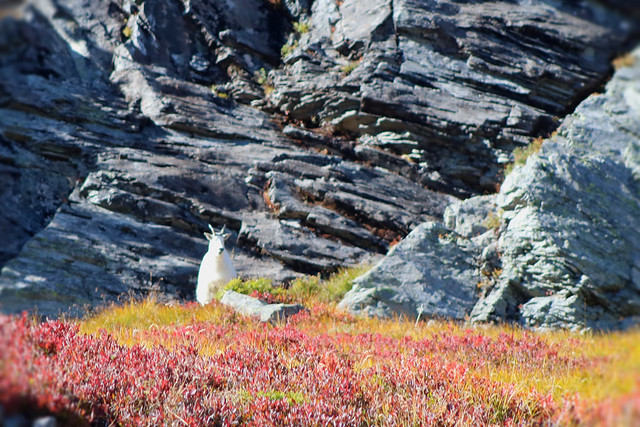 The goat’s best defense is that they can climb this steep rocky terrain like none of its predators. On days like this, they come down from the crags to graze on the grasses and huckleberries

Although these majestic critters do look like large billy goats, they are actually members of the antelope family (Oreamnos americanus).They are native to Northwest North America and are found from Alaska through Washington State and some are found into Oregon as well. It is the only genus and species of its kind.

The goat sighting was a wonderful bonus for our hike but our main intent, aside from soaking up the natural beauty of this area was to see the fall colors and see we did. For the most part the flowers and grasses that we saw in August were faded and withered. But the deciduous plants up that high, a bit over 5,000 feet, had turned various shades of red, orange, yellow and purple. And there were still a few huckleberries to be found along the trail on purple leaved bushes. 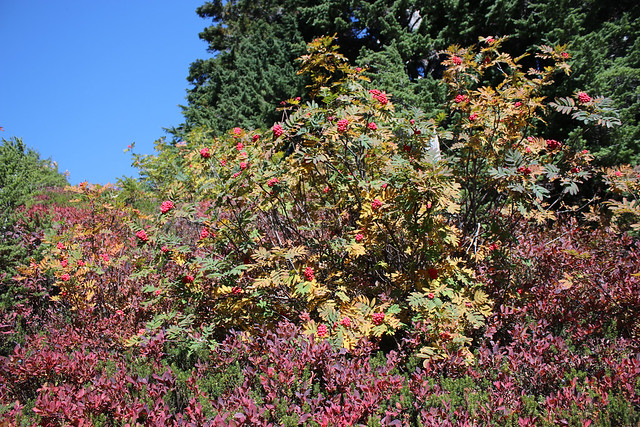 There were large fields of fading grasses and sedges that provided a setting for some high flying butterflies. 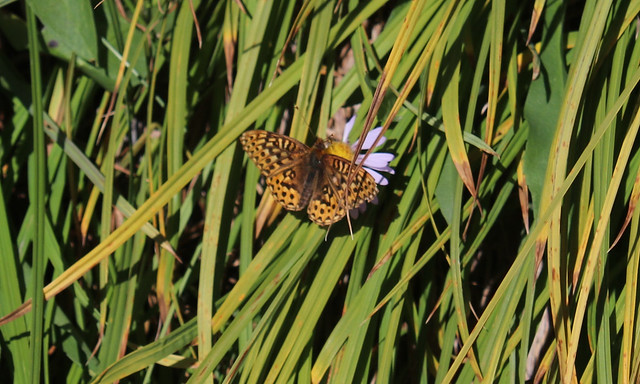 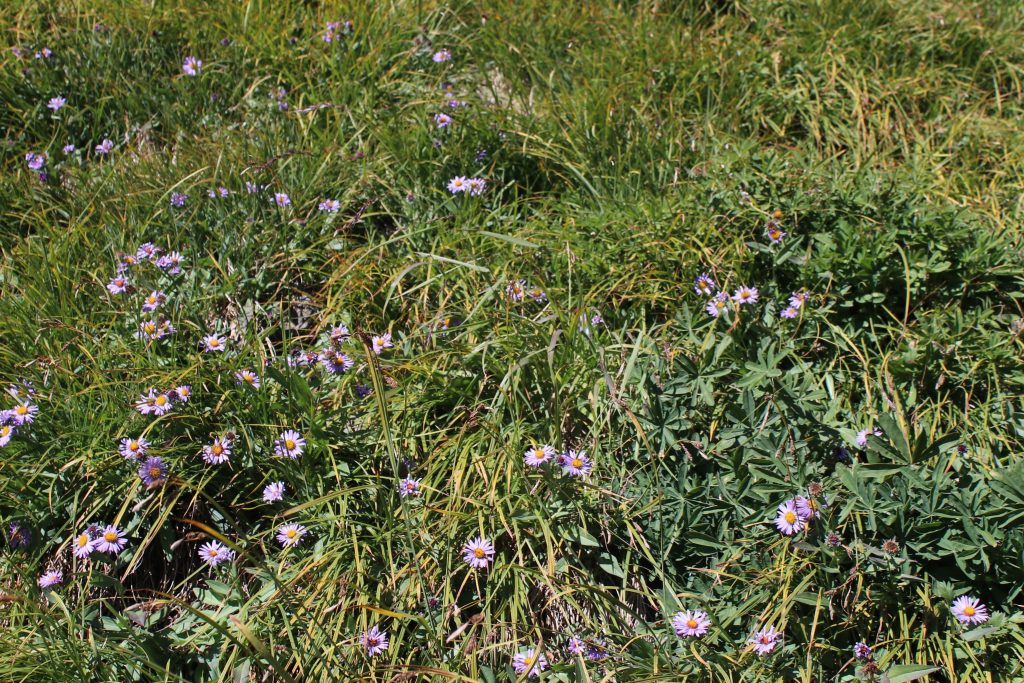 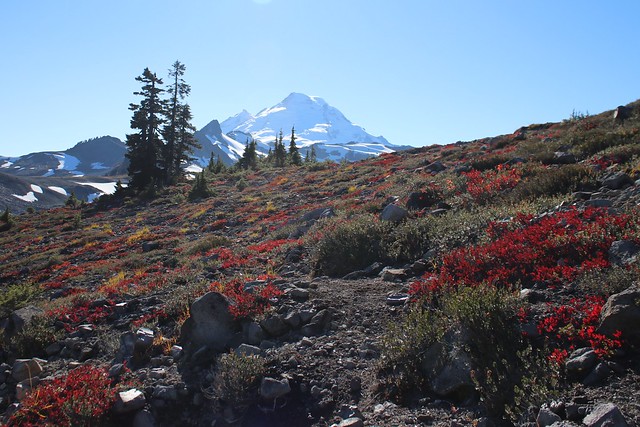 Nice setting against the big mountain 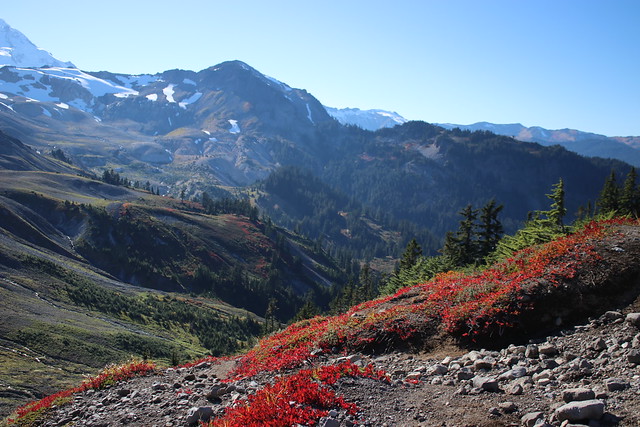 And they drop off into some deep valleys 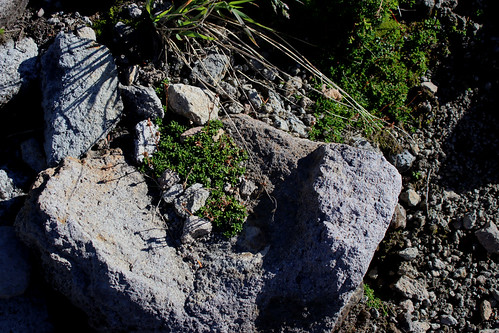 Another well placed plant in a rock seemingly made for it. I believe this is a Tolmie’s Saxifrage with flowers desiccated

As stunning as the colors and terrain are, the big mountains cannot be ignored as they set the stage for all of the other scenery. The wilderness’ namesake, Mt. Baker is visible from most of northwest Washington and lower British Columbia  as it standing at 10,781 feet and is heavily glaciated. This is probably the end of the melting season and the snow you see will likely be there next year as snow is predicted in the area this week. 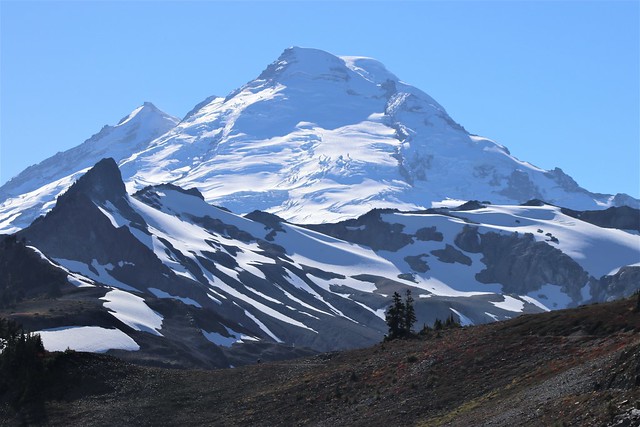 Mt. Baker (AKA Komo Kulsan, Lummi tribe, Coast Salish name meaning “Steep White Mountain.”) Coleman Pinnacle protrudes to the left  and marks the beginning of Ptarmigan Ridge that runs up to the glaciers.  Its current namesake is 3rd Lieutenant Joseph Baker of the HMS Discovery, George Vancouver’s ship that explored Puget Sound in the 1790s.

Baker is the 3rd highest mountain in the Cascade Range and has the second most thermally active crater after Mt. St. Helens. In geological terms, Baker is a relatively young volcano that structured much of the surrounding terrain. For example, the lower slopes seen below are composed of volcanic ash from flows over numerous eruptions over the last 140,000 years. 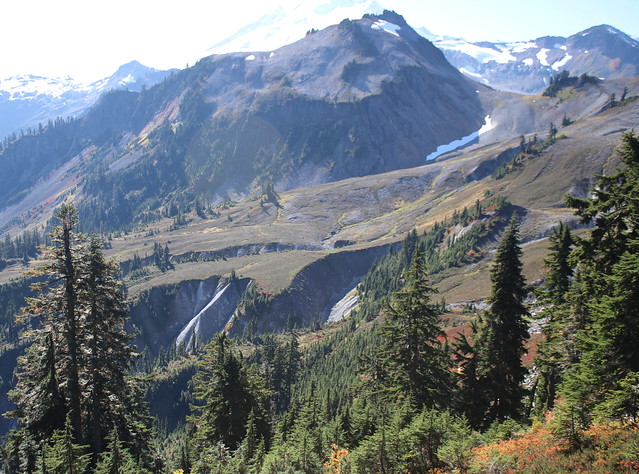 Mt. Baker is faintly seen in the background but the slopes in the center ground are composed of volcanic ash flows from earlier eruptions. You can see there is deep erosion down slope of the loose ash.

For the hike out we traveled mostly west toward Mt. Baker, with Mt. Shuksan at our backs to the east. Shucksan is not a volcano but a massif, composed of metamorphosed greenschist. It  rises to 9, 131 feet, 1600 feet lower than Baker. It too is well glaciated but is losing them at an observable rate. We were “treated” to witness some of that loss on our hike back.

On several occasions during the day we heard some great rumbles that at first sounded like perhaps a jet roaring by, but no jets in sight.  Later another series of roars made us think of glacier calving. As we proceeded back up the trail we sat for a rest in clear sight of the mountain and heard another roar. Orienting to the mountain it became clear where the sound came from, a calving glacier. At the third roar we were able to see the ice fall tumbling from the hanging edge of White Salmon Glacier shown below. 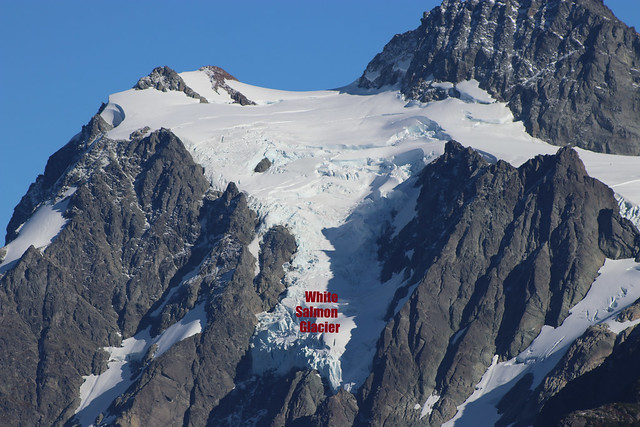 White Salmon Glacier on Mt. Shucksan that was calving shown below 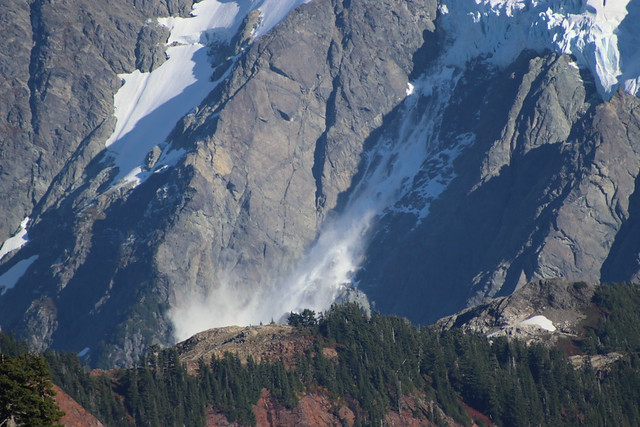 The ice fall roaring down the chute with dust and debris

Finally back at the parking lot at Artist Point, we had one more obligatory stop at Picture Lake where Shucksan looms as the back drop. Picture Lake is typically my favorite photo point as it has wild flowers, huckleberries, mountain ash, and lake grasses.  This picturesque mountain and lake combination is arguably the most photographed mountain scenes in the US.

The sun was getting low behind Table Mountain to the west by this time so the lake was mostly dark hiding its colors. So, we went to Highwood Lake just a few yards which was oriented such that it was more open to the sun and still had some color. Here are a few photos from that lake. 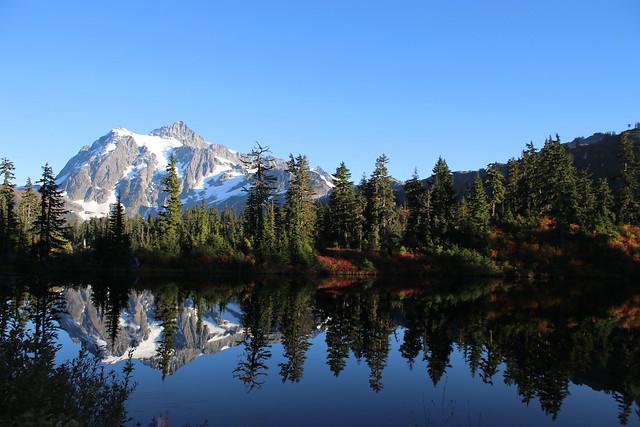 You might notice that the lake’s reflectance was amazing, actually mirror-like. The following two photos demonstrate this amazing effect.

These are the exact same photo of the reflection in the lake but one is inverted. 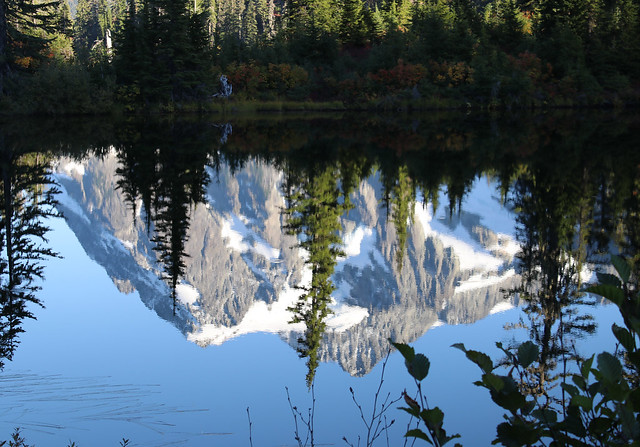 Original photo taken of the lake reflection, note lake grasses where they belong in lower left. 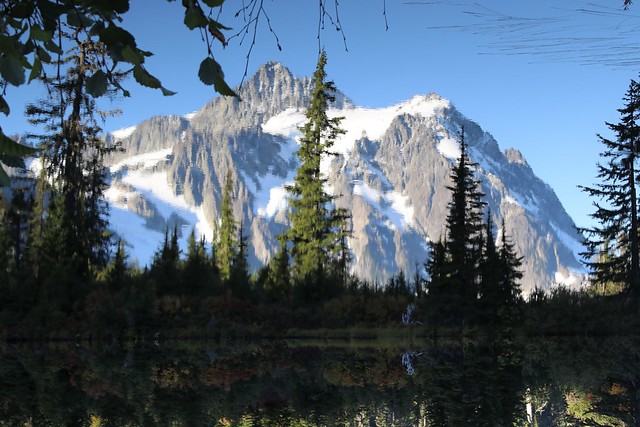 Also at these marvelous lakes is a reliable beggar. Gray Jays have learned from the photographers that if they look cute and land on their hands, they will get food. My guess is that it is mostly junk food but then they look pretty healthy. 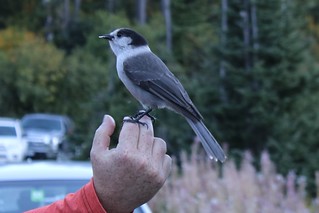