Lots of highs and some lows …So many coming at us so fast it’s hard to keep up. Dotard has been rather quiet lately giving us a little respite from his stupidity on Twitter..Most of what we’ve seen lately with his name attached is not the blowhard. Too coherent and no misspells. Seems ever since Stormy hit he’s either had his phone confiscated or he’s actually listening to someone. Figuring that someone has to be Jarvanka.

The present day Peyton Place, alias the WH, is like SNL with Belushi, with out the comedy. Kinda like a food fight without the food. With Dotard doing all he can to fuck over everyone the deplorable moniker Hillary gave out fits all of them like a leather glove.

What will today show? It sure would be nice to see Bobby pull out some subpoenas today.

I expect next week to be a doozy as a lot of stuff is coming to a head and has to pop sooner rather than later.

How true is this?

Excellent video about PR and the deplorable response of the Federal gov’t.

Another excellent take from Steve Schmidt…

"What you see is another example of an adult acting terribly"
More from @SteveSchmidtSES on Laura Ingraham pic.twitter.com/DMeQanddFM

Fuck you Laura! We hope you lose them all..

1. BREAKING: Gates is being used as a witness NOT, as many thought, Primarily to nail Manafort but INSTEAD to investigate the Trump campaign's conspiracy with Russia. BLOOP! https://t.co/4AtpTurS5b

Daddy Batch..kittens are 3 days old..Momma cat is being a good momma so far. 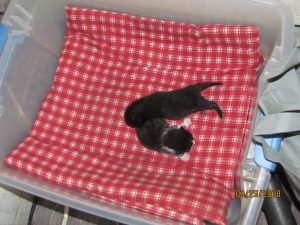 Have a great Friday and weekend!!!