The Weekly Democratic Party Address was delivered by Representative Marcia Fudge of Ohio.

(Congresswoman Marcia Fudge of Ohio delivered the Weekly Democratic Address. In this week’s address, Fudge condemns Republicans’ cruel and destructive Farm Bill that leaves America’s rural communities behind and steals food from the hungry by reducing $23 billion in SNAP benefits.)

“We reject this Farm Bill. We demand more for our farmers, for our rural and urban communities and for our nation’s hungry. We can do so much more for them. We will not settle for a bill that underdelivers on all levels. It is a Congressional failure! […]

The bill cuts more than $20 billion from SNAP. It would kick 265,000 children out of the free school breakfast and lunch programs. It would eliminate benefits for 400,000 households – almost a million hungry Americans overall. It would waste billions on redundant and unproven training bureaucracies that our states have told us that they cannot operate effectively. It would create so many barriers that hungry families would be forced to give up seeking the help they need.

The Republicans call this ‘self-selection.’ I call it engineered failure. The GOP hopes that with enough red tape, our hungry neighbors will simply give up and go away. That may leave the Republicans with a clear conscience, but it keeps me up at night. […]

We can turn around and work together to make this bill better. But it all starts with a willingness to put ideology and partisanship aside and sit down together. 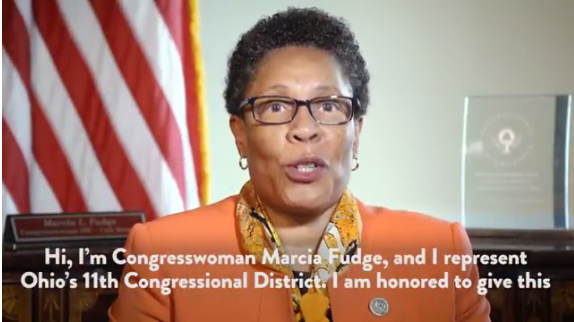 “Hi, I’m Congresswoman Marcia Fudge, and I represent Ohio’s 11th Congressional District. I am honored to give this week’s Democratic Address, to address an issue that will impact Americans in communities large and small.

“I have the privilege of representing Northeast Ohio on the House Agriculture Committee, where I serve as the Ranking Member of the Subcommittee on Conservation and Forestry. As you may know, the House has rejected the committee’s hallmark legislation – the Farm Bill – just today.

“My fellow Democrats and I unanimously opposed this bill, and we have spoken about it passionately both in Washington and in our communities for months. We have received a lot of good questions. We hear a great many concerns from farmers, community advocates and the broad range of stakeholders impacted by our nation’s food and farm policy.

“We reject this Farm Bill. We demand more for our farmers, for our rural and urban communities and for our nation’s hungry. We can do so much more for them. We will not settle for a bill that underdelivers on all levels. It is a Congressional failure!

“We reject this Farm Bill because it fails our farmers. Farm income is down 52 percent. Crop prices are down 40 percent. Land values are down 20 percent. The worsening farm crisis is weakening rural communities across my home state of Ohio and nationwide. We are in the middle of a storm. With the president’s reckless actions on trade, and his broken promises on renewable fuels like biodiesel and ethanol, it will get much worse.

“The Republicans’ Farm Bill does not make the needed improvements to the farm safety net to account for the growing emergency facing farm country. Further, the bill offers only a lukewarm commitment to trade. It fails to increase investments in programs like the Market Access Program which helps trade associations, cooperatives and small businesses build commercial export markets.

“We reject this Farm Bill because it worsens hunger. The bill cuts more than $20 billion from SNAP. It would kick 265,000 children out of the free school breakfast and lunch programs. It would eliminate benefits for 400,000 households – almost a million hungry Americans overall. It would waste billions on redundant and unproven training bureaucracies that our states have told us that they cannot operate effectively. It would create so many barriers that hungry families would be forced to give up seeking the help they need.

“The Republicans call this ‘self-selection.’ I call it engineered failure. The GOP hopes that with enough red tape, our hungry neighbors will simply give up and go away. That may leave the Republicans with a clear conscience, but it keeps me up at night.

“We reject this Farm Bill because it doesn’t do enough to strengthen rural communities. It adds barriers to delivery of rural broadband. It fails to adequately fund scholarships or development programs for the next generation of leaders. It increases competition for a small pool of rural development resources. And, it eliminates key programs that help us achieve energy efficiency and independence.

“We reject this Farm Bill because it neglects conservation. This could not be any more critical than in the Lake Erie watershed I represent.

“Farmers, ranchers and environmental advocates work collaboratively to keep our soil and water clean. The Republicans’ Farm Bill strips almost $800 million from federal conservation programs that farmers use to help accomplish these goals. It is unconscionable.

“This Farm Bill simply isn’t good enough. Had Democrats been at the table when the bill was written, we could have made it better. But we were kept in the dark until the last minute, then pushed away by the Republicans’ ideological crusade.

“People ask why we aren’t taking this opportunity to make the bill better. We are.

“By voting ‘no,’ we are giving Republicans another chance to come back to the negotiating table and join us in crafting a Farm Bill that actually works for the people it’s supposed to serve.

“I hope they take that opportunity. There is no reason we have to go down this road. We can turn around and work together to make this bill better. But it all starts with a willingness to put ideology and partisanship aside and sit down together.

Today, Democrats are taking bold action to break through the obstruction of the Republican Congress and get the American people a vote on overwhelmingly bipartisan priorities.

After the success of yesterday’s bipartisan vote in the Senate, we’re so proud of Senator [Ed] Markey, our former House Member who worked on these issues when he was in the House, that effort in the Senate to save the internet and restore net neutrality.

Democrats, led by Representative Mike Doyle, are filing a discharge petition to force a vote in the House as well.

I think Members are in for a real treat. They’re going to hear overwhelmingly from their constituents in big numbers about the priority they place on a free, fair, and open internet.

Millions of Americans have weighed in. The young people especially, who know how important net neutrality is to their job and to their future, will be able to see who stands with them and who does not. That’s on net neutrality. [Congressman] Mike Doyle has been our champion in the House.

Lastly, I was on a farm in Iowa to listen to the hard-working men and women to talk about their problems with the Farm Bill that’s on the floor now, as you know. Farmers are struggling with plummeting prices, great economic uncertainty, and self-inflicted damage of the Trump Tariffs. When I say self, self for our country.

These grants to high-speed broadband are essential to economic development, rural development, and they’re putting obstacles in the way of that.

Eliminating funding for the On Farm Energy Initiative, neglecting the central role of the American farmer and America’s energy independence.

The GOP wants to cut $23 billion from child nutrition, veteran nutrition, the SNAP program, endangering a lifeline for hungry children, seniors, students; 1.5 million veterans are involved in the nutrition program.

And even farmers themselves. Farmers there [Iowa] say, it may sound strange to you, ‘We grow food. We sell our produce. But we do not make enough. We are food insecure.’

In fact, when I was Speaker, we had bipartisanship even to override President Bush’s vetoes of the bill. So we know we can come to the table to get the job done.

But this is ideological about, I don’t know, taking food out of the mouths of babies. That, maybe, is a priority for them.

Again and again, we see Republicans trying to force a raw deal on working families to pay for handouts to the rich that are already wealthy. Eighty-three percent of their tax bill went to the top 1 percent.

As you know, during the campaign the President said things like, ‘When it comes time to negotiate the cost of drugs, we’re going to negotiate like crazy.’ Well, ‘like crazy’ must mean not at all, because that’s what he announced when he made his long delayed, much awaited announcement about negotiating for lower prices.

When it came time for him to negotiate, the President pulled his punch, and the stocks of Big Pharma companies – don’t take my word for it, look at the stock market after he made his statement: Pharma stocks soared, because they saw that he was not serious about holding down prescription drug prices.

Families and seniors are suffering from the raw deal that Republicans are forcing on them. And in terms of prescription drugs, our Better Deal says that we’re going to have solutions, tough new enforcement of price gouging, allowing Medicare Part D to negotiate for drug prices, transparency in excessive drug price increases. This is so important to the American people.

The President has talked about the power of the prescription drug lobby. Oh, my gosh, he said so many things. I won’t go into them now unless you ask. And then again he just – either he wasn’t telling the truth then or didn’t know what the truth was. But right now he’s reneged.

The relentless Republican assault on families’ health is a Raw Deal for the American people. We’re fighting to expand the possibility and the reality, the promise of affordable, quality coverage for all, and that includes lower drug prices.

Any questions? No? Yes, ma’am.

Nancy Pelosi: Six months ago, the Trump Administration handed big-internet providers a brazen give-away at the expense of families and small businesses. Since then, Americans in every corner in the country have boldly stood up and called for an end to the Trump assault on net neutrality.

Today, Senate Democrats answered their calls, joined by Senators Collins, Murkowski, and Kennedy and we salute their courage.

With this vote, Democrats are taking a step to protect consumers from a White House that wants to hike their costs and choke off browsing choice. We are giving entrepreneurs a level playing field and preventing the GOP from punishing small businesses. We are ensuring that American entrepreneurship and innovation will continue to be the envy of the world. Young people get it: net neutrality is about their jobs and their futures.

Supporting this resolution means supporting our democracy, ensuring the voices of consumers are heard, their will is respected and that the internet remains open to all. Why would Speaker Ryan and Republicans want to stand in the way of democracy?

More at the link.

Congress has an obligation to conduct meaningful oversight of the executive branch. House Republicans have instead chosen to aid and abet President Trump’s nonstop campaign to interfere with and discredit the Special Counsel, the Department of Justice, and the FBI. Republicans have stymied Democrats’ efforts to investigate an out-of-control Administration and wasted taxpayer dollars chasing debunked conspiracy theories. It is time for House Republicans—and the so-called “law and order” party—to put our national security ahead President Trump’s political interest by joining Democrats in doing the same.

Timeline of investigation into Russian interference at the link.