“Like so many women and men across the country, I watched Dr. Ford testify on Thursday with tears in my eyes. Her courage is truly incredible—and she is an inspiration to women, girls, and sexual assault survivors across the country. Now that we have seen Dr. Ford share her experience so bravely and vividly, and we have heard what Judge Kavanaugh has to say regarding just one of the allegations he faces, the eyes of the nation are on this Supreme Court nomination—and the Republicans who control the Senate face a few very simple, but absolutely critical questions. Is the United States Senate a place where women are listened to, heard, and respected?” 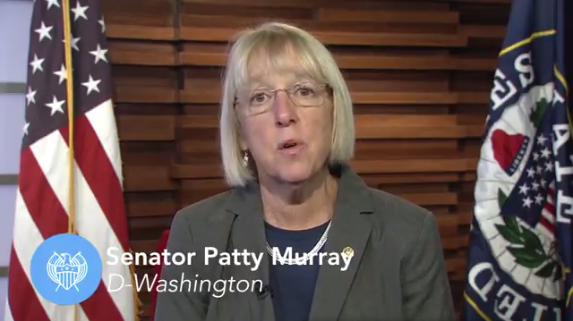 (Washington, D.C.) – Calling on Senate Republicans to launch a full and fair investigation into multiple sexual assault allegations against President Trump’s Supreme Court nominee Judge Brett Kavanaugh and end their rush to confirm him to the nation’s highest court, today U.S. Senator Patty Murray (D-WA), Assistant Senate Democratic Leader and the highest-ranking woman in the United States Senate, called on her colleagues to listen to the experiences of women and survivors of sexual assault, and to take them seriously, as the Senate Judiciary Committee prepares to hear testimony from Dr. Christine Blasey Ford, one of Judge Kavanaugh’s accusers.

“I decided to run for the United States Senate after I saw Senators get these questions wrong in the Anita Hill hearings of 1991. I ran to be a voice for the women and men across the country who thought it was absolutely wrong for her to be ignored and attacked—swept aside and disbelieved. I ran for right here, in this moment, in the United States Senate—to make sure we don’t allow that to happen again. For my daughter—who sat by my side as we watched that all-male Judiciary Committee grill Anita Hill. For her daughters—my granddaughters—who are not quite old enough to understand what will happen on Thursday, but who will grow up in a world that will treat them better or worse depending on how women are treated this week. For Caitlin—and the women just like her who share their stories with me—some out loud in front of crowds, some in whispered voices after everyone else has left. And for the women we don’t know—who have buried their experiences deep down inside—who have kept their secret for decades because they have been too scared or intimidated to come forward, and who are watching to see what happens here, right now, in this moment, in the United States Senate. I am proud to bring their voices to the Senate floor today and I am truly hopeful that enough Republicans stand with them and that we can do the right thing,” said Senator Murray in her floor speech.

Full transcript at the link.

Leader Pelosi. So you’re all over on the Senate side? Is that the deal?

Leader Pelosi. Well, it’s a good – I’m glad that you’re here. Thank you. And it’s important that the focus of our country be on who we are as a nation in terms of fairness.

Yesterday, the American people were moved and nearly, in some cases, heartbroken by the courageous testimony of Dr. Christine Blasey Ford. Dr. Ford told her story with extraordinary dignity and grace, bravery and unimpeachable credibility. And with their response, the Republican men of the Senate have sent an unmistakable message to women and girls everywhere: if you come forward, you will not be respected, and you will not be listened to.

It’s really kind of sad, because there are two equities that need to be weighed here. One is the integrity of the Supreme Court. The other is the respect that we owe women when they come forward. Neither of these equities is well‑served by the process that the Republican members of the Judiciary Committee engaged in yesterday, and refuse to acknowledge the need for truth. For truth.

It is interesting that the ABA, which had approved the nomination – gave a favorable rating for the nomination of Judge Kavanaugh – has sent out a letter saying, it urges, ‘the American Bar Association urges the United States Senate Judiciary Committee (and, as appropriate, the full Senate) to conduct a confirmation vote on Judge Kavanaugh’s nomination to the Supreme Court, after, only after, an appropriate background check into the allegations made by Professor Ford and others is completed by the Federal Bureau of Investigation.’

So it is the ABA saying that. And, you know – I mean, I don’t know. Have you ever been called by the FBI or had them visit you because your neighbor or friend or associate is up for a federal appointment? They’re very thorough in their vetting, and yet, the President has blocked the FBI from being thorough in its vetting. It’s really quite a tragic thing.

And, of course, what would we expect from a Republican Judiciary Committee that has not – that won’t seek – won’t allow the truth to be known. Also, Republican leadership in the Senate will not allow Me Too legislation, which passed the House in a bipartisan way, to come up.

Republicans in the House who won’t – not go forward with the full authorization of the Violence Against Women Act. There’s a pattern here. It’s a very sad pattern.

Some of our colleagues went over there yesterday and delivered a message to Leader McConnell saying, we ask that you postpone any votes on Judge Kavanaugh until a formal investigation is made into these troubling allegations. The letter is there for the record.

This assault that Dr. Ford presented has a lifetime impact on her, and this judge wants a lifetime appointment to the Court. We want the facts. But we know one thing: He does not have the temperament to be a judge. And I will just go this far – a step farther and say the reason I think the Republicans do not want the truth to come forth from the FBI is because the truth will reveal that Judge Kavanaugh has not been truthful in his answers to the Congress of the United States.

And that is a cause for concern in terms of not only the job he wants, but the job that he has now.

So here we are today, the last day, packing our bags, getting out of town. What we have to do as we say good‑bye? Have another tax scam that adds to the deficit that is unfair to America’s workers and families, and cuts hundreds of billions of dollars, in fact, over $1 trillion it will require from Medicaid.

It’s not a statement of our values. It’s, again, something that is done in a way that is not transparent, that is not accountable to the public, and is not fair to the American people.

Republicans have made no secret about their agenda. Add trillions to the debt, and then use those debts to justify slashing Medicare, Medicaid and Social Security. And the list goes on.

The AARP wrote a letter to Congress yesterday to warn us against the egregious damage that would be done by a second phase of Republican deficit-exploding tax scam. They said, AARP said, ‘We have grave concerns about H.R. 6760, and we are troubled by the further negative effect this bill will have on the nation’s ability to fund critical priorities. Additional increase of this magnitude to the deficit will inevitably lead to calls for greater spending cuts, which are likely to include cuts to Medicare, Medicaid, and other important programs serving older Americans.’ The letter concludes, ‘AARP cannot support H.R. 6760.’

The contrast between Republicans and Democrats could not be clearer. The GOP has used control of Washington to stack the deck, to give a raw deal against – to America’s working families.

It’s really stunning, and I just somehow, without being a fearmonger, I want to be sure the American people know that with their tax scam bill, they pave the way to take away the pre-existing condition benefit. So important was it to them that attorneys general – Republican attorneys general around the country have filed a case to make sure that that is removed as the law. I think that’s one of the reasons they want Justice Kavanaugh in there as soon as possible. They want him to be there, because he is there to undermine the Affordable Care Act. And the case that will come before them that’s in Texas now is the case about pre-existing conditions and that benefit.

That’s one of the reasons they want him there. Of course, the President said – he said it’s a done deal. Roe v. Wade is over.

I’ll take any questions you have.

Q: What has been the reaction from voters to the Kavanaugh scandal? And do you think that it does benefit the Democrats in the year of the woman and the Me Too movement?

Leader Pelosi. Well, let me say, if it benefits Democrats politically, it’s a bonanza that we don’t want. That we do not want. What we want is integrity on the Supreme Court, a Justice who will uphold the Constitution of the United States.

Q: What are thoughts on Republicans using Rachel Mitchell yesterday to ask the questions instead of them asking questions?

AARP is troubled by the further negative effect this bill will have on the nation’s ability to fund critical priorities. The Joint Committee on Taxation (JCT) estimates that H.R. 6760 will reduce federal revenue by approximately $631 billion over the 10-year budget window. This is in addition to the $1.5 trillion reduction in revenue over the 10-year budget window resulting from last year’s Tax Cuts and Jobs Act. Additional increases of this magnitude in the deficit will inevitably lead to calls for greater spending cuts, which are likely to include cuts to Medicare, Medicaid, and other important programs serving older Americans.

But Republicans are choosing to ignore the American people. And AARP has good reason to fear that Republicans are planning to use the trillions in debt from their tax scams to force cuts to seniors.

Top Trump Administration officials are openly talking about the GOP plan to slash Medicare, Medicaid and Social Security if they control Congress next year, and House Republicans are forcing a vote tomorrow on the GOP tax scam for the rich 2.0: the bill that, in addition to the first GOP tax scam, adds trillions more to the deficit and makes tax breaks for billionaires permanent.

Under the twisted GOP agenda, we can afford to give multi-billion dollar tax breaks to Big Pharma, but seniors struggling to make ends meet need to pay more for their health care.

Democrats are committed to fighting for seniors and pushing an agenda For The People: lower health care costs and prescription drug prices, raise worker’s wages, and clean up corruption in Washington.