It was a nice day with temps predicted to be up to 50F. And it was spring break for my nature trekking companion and shutterbug granddaughter Ava. We’d missed our regular outings this past year and we both felt it was time to get going again as I was fully vaccinated and she wore her mask.

We headed east toward the North Cascade Mts. and Mt. Baker National Forest along the North Fork of the Nooksack River. Cameras and bagel sandwiches were packed as we’ve done on many occasions just to see what we could see.

The mosses and lichens were at their most colorful with just a bit of sun poking through to highlight the green velvets that shrouded rocks, trees and logs. 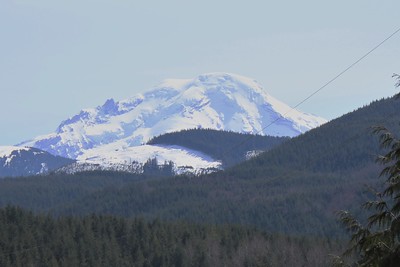 The Big Mountain, Kulshan, (aka, Mt. Baker) was out, loomed above the forest and river as if keeping a protective eye all who were enjoying her beauty.

We began along the Nooksack at the Horseshoe Bend trail head as that part of the river is both accessible and is one of the more photogenic reaches. It is one of my favorites and Ava had never been on this riverside trail.

The water was moving well but not running too hard as there had not been a recent rain and it had been too cool for the snow up higher to melt rapidly as it will before long. It was just right for what we wanted. We first set up our photo shoot off trail and down to the river’s edge to get some close ups of rambling waters.

We moved back onto the trail to capture the greens of the moss and lichens hanging from just about everywhere. As we went upstream,  the trail rose above and away from the river but there were still some great views.

Going back down a trail is always interesting as one gets a totally different perspective and you see things that you missed on the way up.

I did not recognize this moss species and it was everywhere. Thanks to Seek, I now have Stair Step Moss (Hylocomium splendens)  among my Seek observations. This moss species goes by numerous other common names such as: glittering wood moss, splendid feather moss, and mountain fern moss. It is common in boreal forests.

Along the way there were plenty of neat old cedar stumps just posed for a photo shoot as they have done for many years.

And then we came upon yet another entry for my Seek Observations list : Lichen  Agaric (Lichenomphalia umbellifera). We saw this little beauty on a stump that we missed on the way up the trail. My photo of the cap was washed out with the bright white and it did not do it justice (left photo) but I did get the cute yellowish stipe. Ava got a better shot of the cap (on the right).

So, is this a lichen or a fungus? Of course it is both and to make it an official lichen, at the base of the stipe are little green algae covering the stump. They are all living happily in symbiotic bliss.

Back down to river level, it was lunch time. Fortunately,  just past the stairs and under the bridge we could walk over to a national forest campground that was not yet open. There we found a picnic table to enjoy our bagel sandwiches, chips and cookies for lunch.

After lunch we decided that on the way home we would stop by and check out our handy work at a nature refuge where the two of us had worked two years previous. There we had planting native vegetation along Kendall Creek, a tributary to the Nooksack River. Ava and I had planted shrubbery at this spot on three occasions including an Earth Day (2019) where we taught/supervised a class of 2nd graders planting Sitka Willows.  Below you can see them growing. Check out the link to see the planting in progress.

The growth was evident from two years previous and more planting had taken place since then. This bird and critter refuge that includes wet lands along Kendall Creek is rapidly returning to an approximation of its native state of yore after a 100 or so year interlude as a farm. It is now jointly maintained by the Audubon Society and the Whatcom Land Trust.

The wildlife refuge seems to be going well and growing as it should. Let’s hope that it educates and nourishes the students from the nearby Kendall elementary school for generations to come.

I always loved Spring Breaks and still do today even if it isn’t my break. Its a great excuse to get out of town and explore what Mother Nature has been up to.