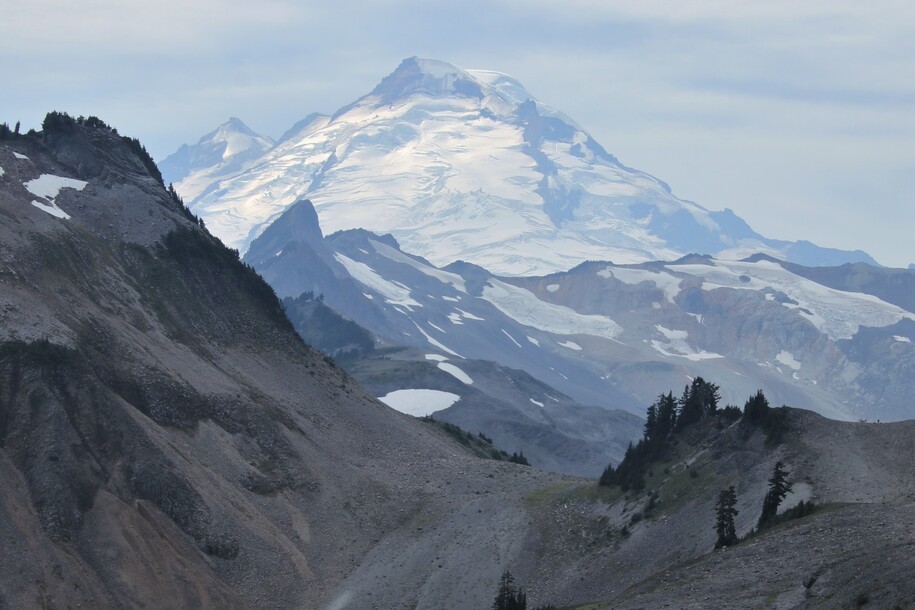 Mt. Baker as seen from the foot of Table Mt. along Ptarmigan Ridge Trail. Facing Northeast are Park and Rainbow Glaciers. Coleman Pinnacle juts upward before the glaciers. The foreground and midground are various levels of eroded volcanic ash, lava and various ejecta, remnants of a very active geologic and eruptive history going back at least 255 million years. The bare mound to the left is Ptarmigan Dome. Interestingly, Baker itself is quite young as the regional volcanos go, about 40,000 years.

We were able once again to do our annual family outing to the Mt. Baker Wilderness Area in late Summer. Given COVID and all, we were able wrangle three of my kids and one grandson this time.  Although it was a bit hazy with some clouds moving in about mid day they were high enough to allow us to capture the big mountains and late summer flora. Sadly, the smoke has become part of the ambience as it hung around as well, probably from fires in British Columbia or Eastern Washington on the other side of the mountains. No Mountain Goats this time. Check this link out for our lucky trip seeing the big goat along this same trail 4 years ago.

Having hiked this area for the past 50 years, I cannot help but notice the shrinking glaciers. After Mt. Rainier, Mt Baker hosts the most glaciers in the Cascade range (13) and they are still there, just not as big and diminishing by the year. They have been measurably retreating for some years having lost up to 30% of their mass since 1984. In another 50 years, they will be mostly gone.

The globe is clearly warming and melting these monster ice floes as they drain down the mountains. Even if GW stopped tomorrow, it would take decades before we could replace the lost glacial mass.  And that ain’t gonna happen.

I guess the answer to “Who Shrunk the Glaciers?” is that “WE DID”. And we continue to do so.

Sorry to start with the gloom. But if you can get here soon, you can still enjoy the beauty of the alpine wilderness and smell the glorious air, after the fires are out this fall.

Here follows a photo log of our trip with all the glorious vistas and flora along the way. This hike begins at Artist Point parking lot, passes by the marker denoting entrance to the Mt. Baker Wilderness Area and then heads west along the talus covered slopes of Table Mountain. 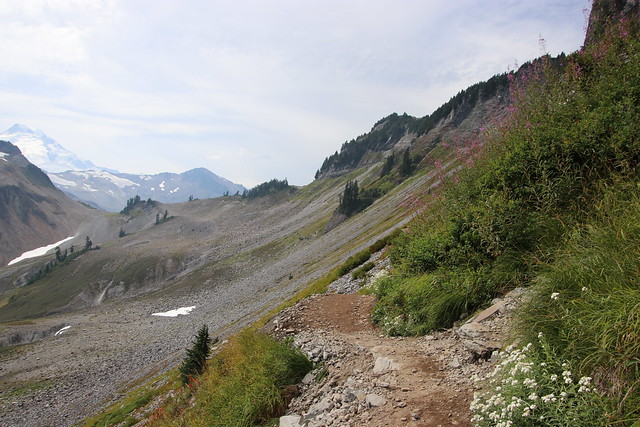 The trail winds along the slope across the talus fields. Out at the far point the trail splits —  to the right it goes around Table Mt. to the north and drops down into the Chain Lakes area. To the left the trail goes west toward the mountain and to Coleman Pinnacle near the glaciers’ edge.

As we move along the trail we are treated to various sights. There are some wildflowers still in bloom, although many have faded already due to the record breaking hot and dry summer. You can see some of the ever present “Fire Weed” up to the right above. 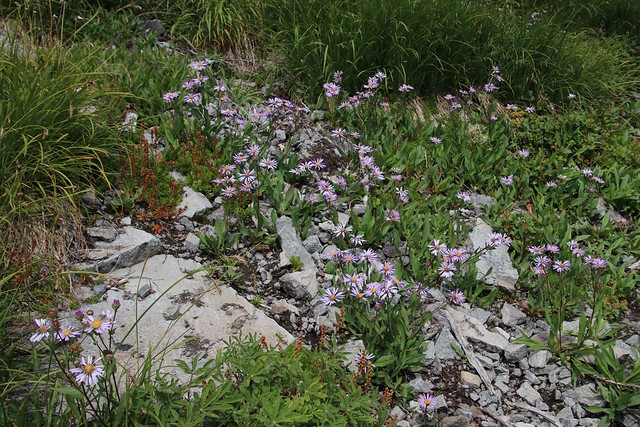 Sprays of Subalpine Daises (Erigeron perigrines), were distributed along the way. 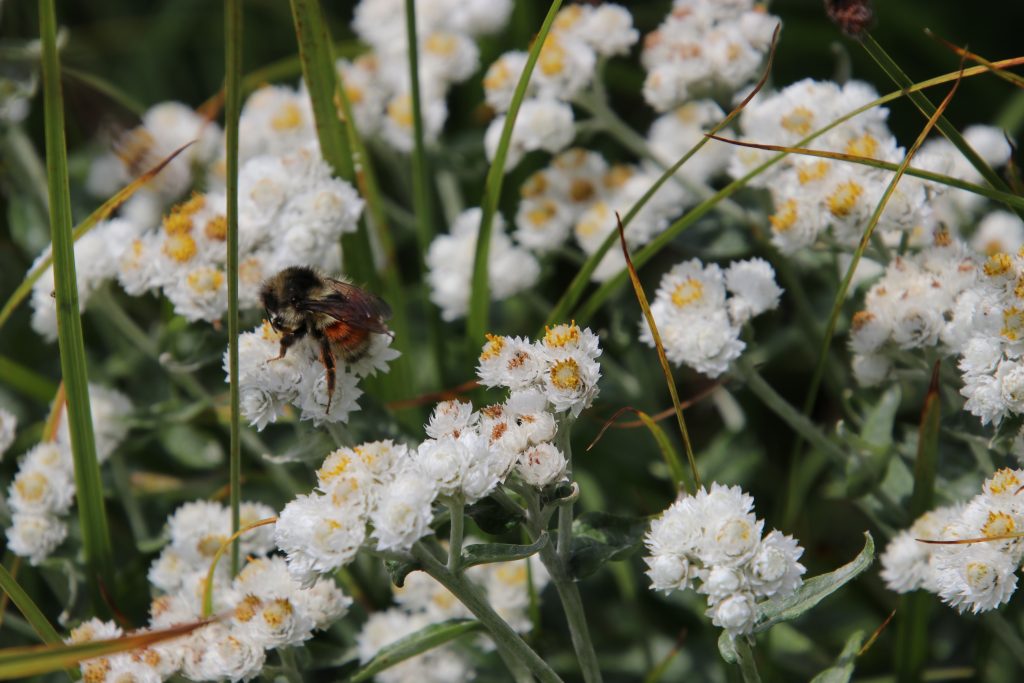 Pearly Everlasting was was everywhere up and down the slopes. The Bumblies (B. huntii) were having a ball with it. 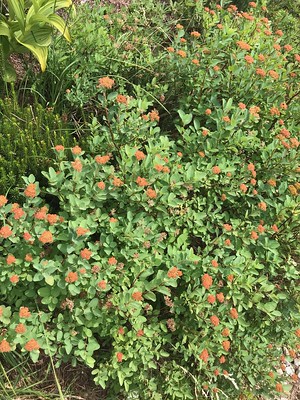 Subalpine Spirea (S. densiflora). Its normal pink flowers had faded and dried to an ochre color. 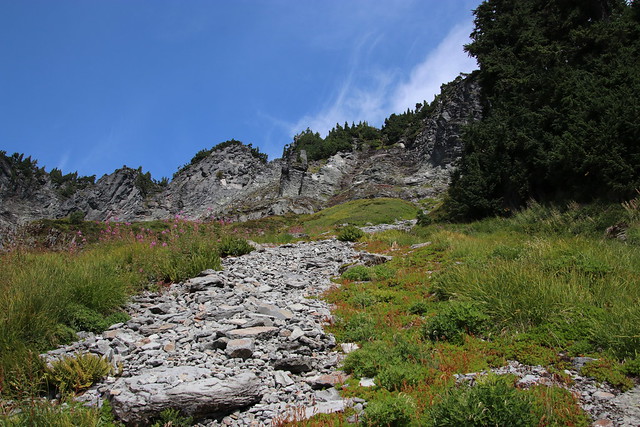 Looking up slope from the trail, we see a recent talus slide marking a path flanked by fireweed, Partridge Foot, Fragile Fern and various grasses

We stopped at the trail divide in the early afternoon and indulged in our traditional hiking lunch of bagel sandwiches, dill pickles, potato chips, cookies and peanut M&Ms. This has been our trail lunch since we started hiking up here when the kids were very young. It was just as good this time so many years later.

After lunch I decided to do a 360 0 video from atop the rock where we sat. My attempt was jerky so my daughter took a try. Her attempt was smoother. Anyway, you can get the idea of your lunch scenery which ever way we looked. (Please ignore the chatter)

The video begins looking west at Mt. Baker then swings to the north across several ridges such as Skyline Divide and on to Table Mountain, an andesite remnant of circa 300,000 y/o lava flow.

The video then swings to the east and features Mt. Shuksan, a non-volcanic massif composed of Shuksan greenschist.  Swinging south the view down the valley to Baker Lake is obstructed by Ptarmigan Dome before returning west to Mt. Baker.

On the way back down the trail, one has a different view of the trip and we see some things we missed on the way up. In this case we were more likely to  be looking down slope than up slope as we did going up.

These last photos are from the trip back to the trail head. 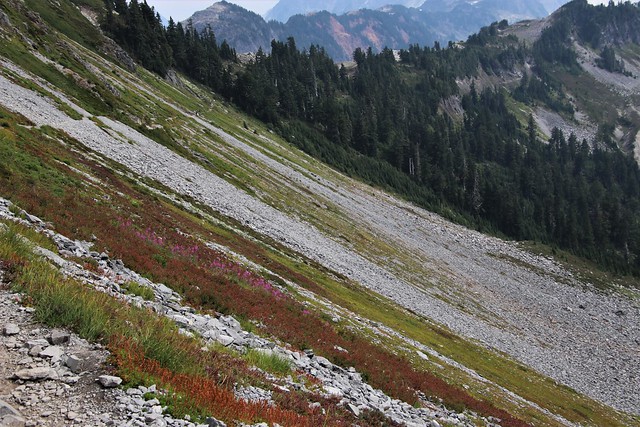 So many hearty plants find ways to insinuate themselves into the rocky slopes and spread their colors when the snow melts. 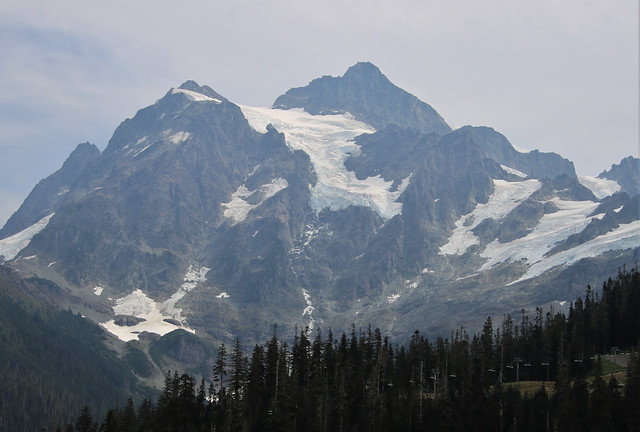 The view of Mt. Shuksan from the artist Point parking lot looking east. It is really right in your face. The large glacier in the center is White Salmon Glacier. If you clicked on the link at the beginning, this is the glacier that was calving.
Low in the photo you can see part of the ski chair lift. The haze seen here is smoke from wildfires either in Eastern WA or BC. 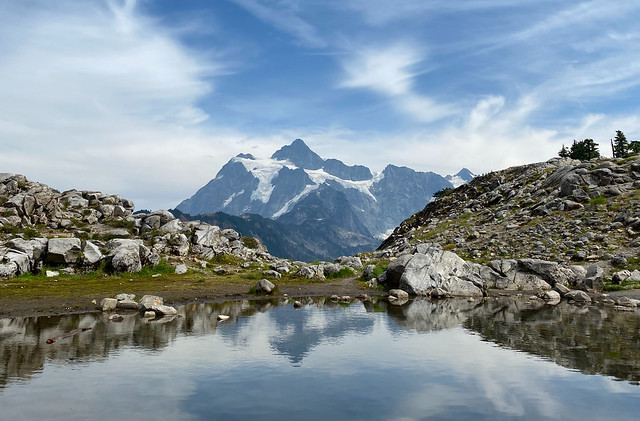 One Last photo of Mt. Shuksan is from a different perspective, a little higher up and with a tarn in the foreground. My daughter took this one later in the day than the one above that I took about 4 hours earlier and you can see less haze and more blue sky.   (Credit: Lisa Kennedy)