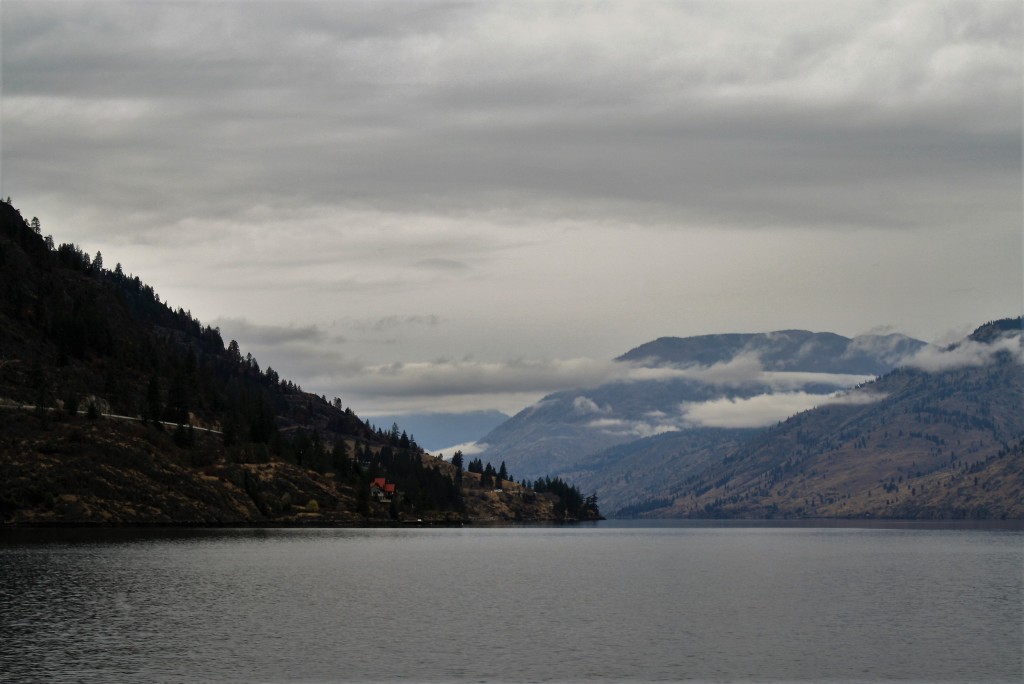 Having traversed the North Cascades Highway (previous diary), I continued east, through the Methow Valley to Pateros on the Columbia River. From there I headed South on U.S. 97 to Chelan. This area, nestled in the foothills of the Cascades is arguably the center of the largest and best apple growing region in the country and maybe the world. They grow about one billion pounds of apples each year and export them to 60 countries. Although the region’s apples are impressive, I believe that Chelan’s major attraction is their 50.5 mile long, fjord-like lake. Lake Chelan is the third deepest lake in the U.S. at 1,486 feet, behind Lake Tahoe, and Crater Lake. More remarkable is its setting within the Cascade Mountains. At the southwestern edge of the lake, Pyramid Peak rises to 8,245 feet above sea level and below, just off shore the lake bottom falls to 386 feet below sea level. This peak to bottom differential of 8,631 feet renders it the deepest gorge in the U.S., surpassing Hell’s Canyon which is the deepest river gorge. Further, the bedrock floor, covered with silt and sediment is several hundred feet deeper yet. The lake’s surface at “full pool” lays 1,100 feet above sea Level and the deepest point, as noted above is the 386 feet below sea level. Five percent of the lake’s water is below sea level which lays 76 miles, due west through the mountains to Puget Sound/Salish Sea. The lake’s clear blue water is fed by 27 glaciers and 59 creeks.

What created this deep and beautiful lake? Glaciers, of Course.

This serpentine lake, 50.5 miles long, and averaging less that 2 miles wide comprises two main adjoined basins, each carved out of rock by formidable glaciers and ice sheets that came and receded on numerous occasions throughout the Pleistocene epoch, ending some 10,000 to 12,000 years ago. The northern most basin is Lucerne, by far the largest and deepest. It was ground out of bed rock by glaciers and Ice sheets of the Skagit basin running south east from the high mountains. The northern terminus of this basin is literally into the mountains and lies only a rugged eight miles as the crow flies from Highway 20 and the North Cascades Highway. The northern 12 miles of the lake also lies within the North Cascades National Park. The smaller and shallower (400 feet) Wapato basin at the south end was apparently scoured by a different ice sheet. This sheet was part of the larger Okanagan Lobe of the Continental Ice sheet that moved down the Columbia River basin and then pushed northwest up the lower part of this valley. The two ice behemoths met at the “narrows,” where the lake is now only ¼ mile wide. It is within this shallower southern basin with its warmer water and dryer climate that most of the summer and water sport recreation occurs with summer air temperatures frequently around 100 F and water temperatures reaching 78 F. As this lower end of the lake is clearly in Eastern Washington, one would typically expect warm sunny days in the fall. Although it was predictably dry when we left the southern shore on the boat trip, fifty miles later at the north end of the lake, it was pouring rain. It becomes clear as one travels up lake that the lower lake is in eastern Washington with its hilly plateaus set on basaltic rock, whereas the upper lake is clearly mountainous with solid and erosion-resistant gneiss as its foundation. 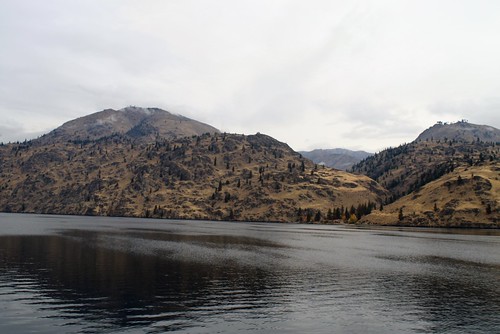 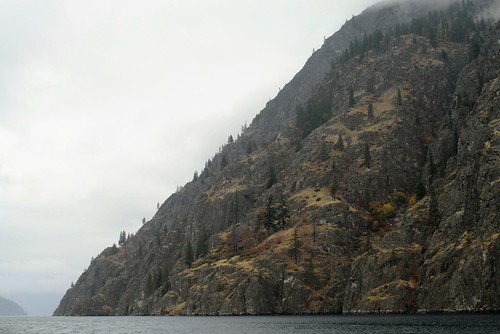 Mountainous terrain at the northern end with Gneiss —

This terrain is reminiscent of many shorelines in Salish Sea

As many readers will know, this past summer lightening spawned a number of major wild fires through Washington State, burning over 1 million acres. Nearly 500 buildings were destroyed by these blazes including 307 primary residences and 21 commercial buildings. Two major fire complexes surrounded Lake Chelan and burned right down into the community. 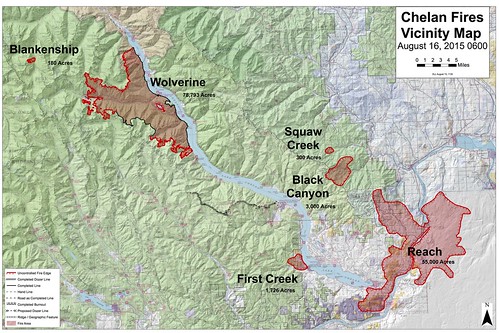 One of these major fires was the Chelan Complex fire that encroached into the town. The Fire Vicinity Map above shows the two fire complexes in relation to the lake and town. The other local fire complex was the Wolverine fire that burned the upper south west side of the lake that covered 24,480 acres. The Chelan complex is at the bottom right and the Wolverine Complex at the upper left.

The intense fire fighting efforts made to save the town were largely successful although at least 50 local homes were lost to the fires. Below is a photo showing an air tanker dropping flame retardant along the city as the fire encroached, burning hills and homes at the edge of town. 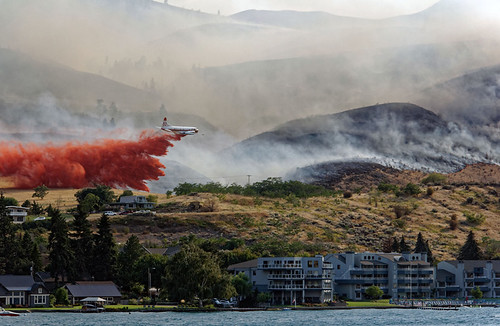 Air tanker dropping fire retardant along side of the town 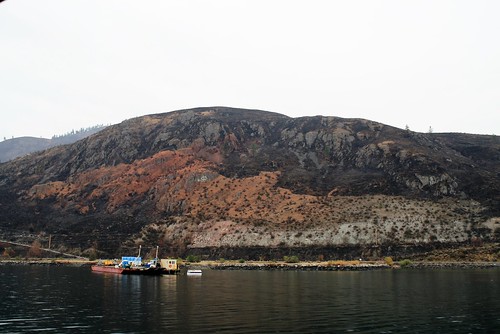 Burned hill and swath of fire retardant (taken from my condo)

As we’ll see as we go up the lake, the fires from the Wolverine complex also got to the lake’s shore up north.

Two months following this disaster, my two brothers and I boarding the 65 foot tour and cargo boat, “The Lady Express,” for a day trip up the lake. The original lake Chelan tour boat was named “The lady of the Lake.” The 100 foot “Lady of the Lake II” plies the waters only in the summer. ” This being off season, we went on the Express which was fine as it was faster than the original lady. For me this was a return trip long awaited as I first rode the Lady in the summer of 1964 to a 4th of July celebration at Stekehin with a college friend.

With the cruise beginning from the south end of the lake with its surrounding grass and brush covered hills, the residue of the summer fires dominated the landscape. Everywhere, you see blackened hills, some burned homes, and orange swaths of fire retardant dropped by the air tankers. As we progressed up the lake it was often difficult to determine if the orange we saw as fire retardant or fall colors. Often it was both. 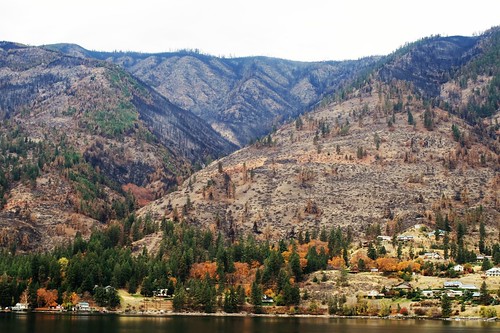 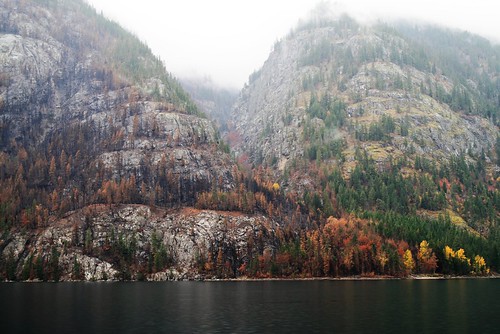 The southern basin is densely built up with summer homes and condos. About 8 miles up lake there is the small farming community of Manson and a nearby popular vacation spot called Wapato Point that juts into the lake. The hills behind Manson show some of the agriculture there with its famous apple orchards and increasingly, grape vineyards. 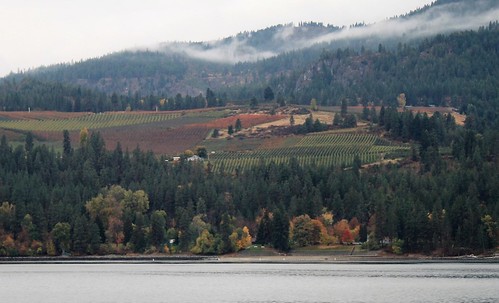 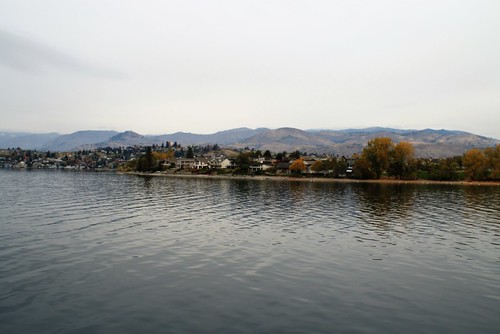 Continuing build up along the lake heading north

Along the way we made two stops to off-load goods and passengers and pick up others. The first stop was Field’s Point Landing which is the furthest point that you can drive up the lake and board the boat. Here we picked up a few more tourists and back packers. The second stop was at Lucerne Landing. A large number of travelers, luggage, and supplies disembarked here and were loaded on to buses for a 10 mile ride up the mountains to Holden Village.

Holden Village is now a church retreat and resort that accommodates up to 450 people at a time. The village operates in what was once one of the largest copper mines in the country. This mine operated from 1937 – 1957. The church retreat has revitalized the mining town using the original buildings for their current operations. Since Lucerne is 14 miles beyond the end of the road, supplies, vehicles, and participants for the mine clean up and the retreat are all brought in by barges and boats. 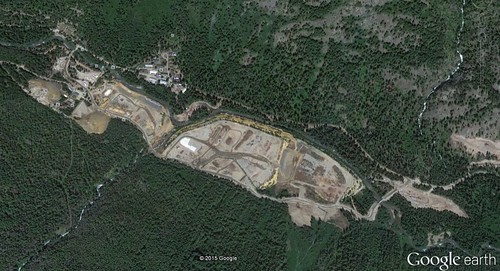 Holden Mine area being cleaned up and Holden Village Retreat

As do most such mines this one left a huge polluted mess when it closed. Nearly 60 years later, the Forest Service, EPA, and State Department of Ecology are overseeing the 200 million dollar reclamation project to clean up the 8 million tons of tailings and the associated pollutants left by the mining processes. The runoff from the tailings have polluted Railroad Creek that runs through the community and drains into Lake Chelan. This clean-up crew of 260 workers along with Holden Village participants, were all evacuated this past August when the Wolverine Fire Complex hit the area. 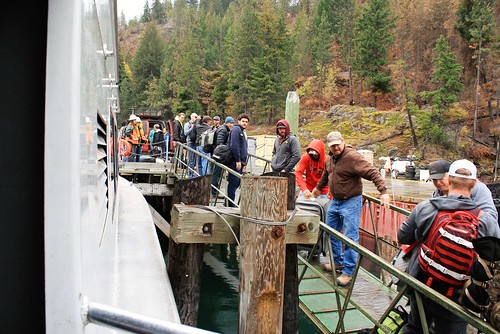 Off loading gear and supplies at Lucerne, bucket brigade style 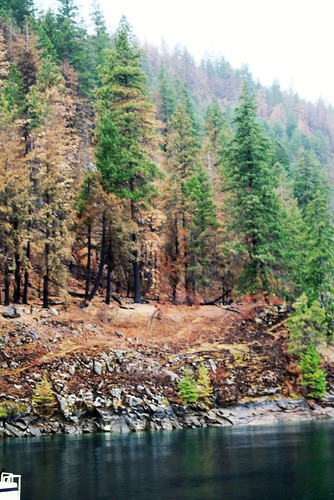 After off-loading passengers and supplies, we continued for the final leg of the trip to Stehekin Village at the end of the lake, another 7 miles.

The Stekehin area has had a human presence for probably thousands of years, initially by Indians as a trading route taking them from what is now eastern Washington, across the Cascades to their trading partners on the West side. “Stehekin” in the common Salish tongue means “the way through.”

Stehekin Village has been a vacation destination for over 100 years. Currently there are about 85 year-round residents although boat loads of tourists and summer home owners arrive during the summer months. There are ample accommodations for the less outdoors types as well as numerous camp grounds for back packers and hikers who are headed for the back country. They even have tour buses to take visitors three miles further into the mountains. The buses and other vehicles are all barged up the lake as there are no connecting roads from the south. Similarly, most supplies come up on regularly scheduled barges, on the tour boats, and some float planes. Roads only go 19 miles up lake, leaving 31 to hike along sheer rock walls that come down to the water line.

Arrival at Stehekin and the end of the lake revealed an inviting dock area with a small marina for some private boats, a restaurant, a general store, an art gallery, and the North Cascades Lodge. 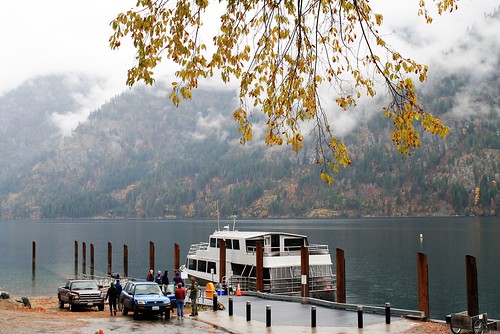 Lady Express at the Stehekin Dock 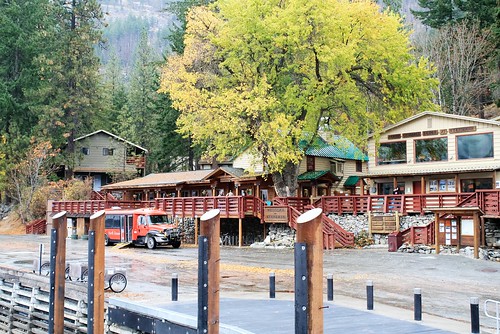 Restaurant and Shops from the landing area

We were given about 1 hour before the return trip to get something to eat at the restaurant seen in the photo. This was just enough time to eat a warm bowl of soup and toasted cheese sandwich, take a few minutes’ walk to the Forest Service Headquarters which was closed for the season, and get back to the boat. Unfortunately we did not have time to peruse the general store or “The House That Jack Built,” art gallery.

Video of Stehekin Village and the upper end of Lake Chelan

On the return trip we again stopped at Lucerne where we picked up more passengers heading down lake. Apparently it was a weekly shift change of the mine clean-up crew. About 50 tired looking construction workers boarded the boat with luggage, back packs, and equipment. They disembarked at the next stop of Fields Point Landing. From there it was a rainy trip back to Chelan. We cruised closer to the north east shore this time that had some interesting topography that was a bit different from the South side that we followed on the way up. 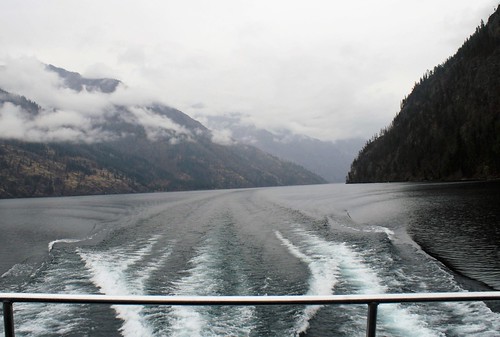 Heading back down lake 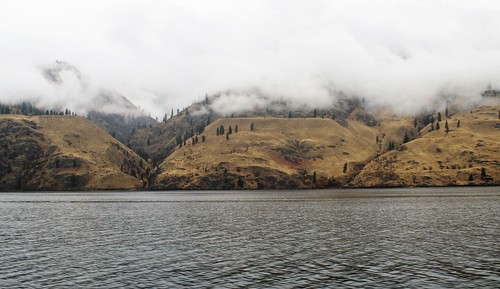 The flattened areas in the hillside are Glacial terraces,

left from the receding ice sheets and now carved with canyons from 12,000 years of runoff 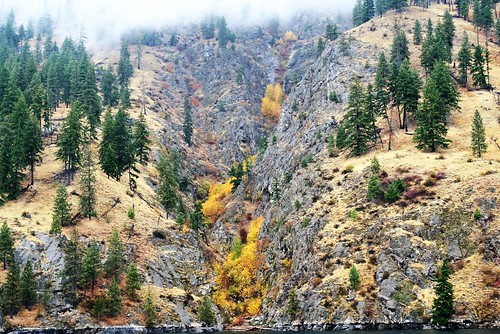 Canyons or coulees erode into bedrock 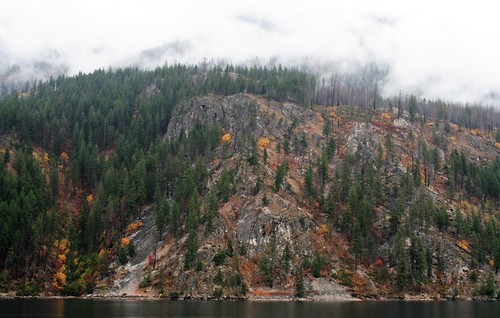 Fall colors in the rock and timber

The Lake trip up Lake Chelan is a pleasure any time of the years, even if you do little more that enjoy the scenery and learn about the natural history of this geologic marvel.