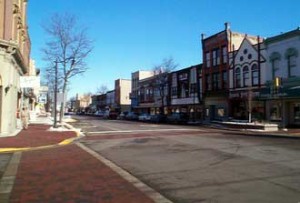 From Al Jazeera: When the ‘refrigerator capital of the world’ lost its refrigerator plant

[The Hoisingtons] long-standing jobs with Electrolux, the multinational firm that took ownership of the plant in the 1980s, gave the couple a solid foothold into the middle class. Jim, now 56, made $16.38 an hour. Patty, now 68, made $15.71. It was enough to raise their children, pay the bills, buy a house and still put a little money away in savings at the end of the week for the nearly 30 years they worked there.

…in 2005, the globalization that had begun to chip away at the rest of the Midwest’s industrial core came to Greenville. Electrolux, like so many firms of the era, announced that it would be shuttering its Greenville plant and leaving for Juarez, Mexico, taking 3,000 jobs with it, a devastating blow in a town of 8,000 people. […]

The company had been toying with the idea for years and may have eventually made the move anyway, but many believed that the North American Free Trade Agreement, enacted in 1994, made the proposition irresistible, with its provisions designed to incentivize foreign investment in Mexico’s still-developing economy and scant labor regulations.

Will the new proposed trade agreements strike the final blow to American manufacturing? Or will they new negotiators learn from the mistakes of their 1990s predecessors?

Ray Jensen, 59, who worked at the plant for 29 years and now owns a convenience store in town, too said the livelihood he scrapes together can’t compare to his former wages and benefits. “The good years of my life were there,” he said. “Have I adapted? Yes. Is it a better living? No.”

Jensen nevertheless said he believes trade agreements are important for the American economy but that today’s negotiators should learn from the mistakes made by NAFTA two decades ago.

Former Michigan Gov. Jennifer Granholm (D) who wrote a book about her efforts, “A Governor’s Story: The Fight for Jobs and America’s Economic Future”, said she built an incentive package to keep Electrolux in Michigan and said it “took Electrolux management approximately 17 minutes to reject her offer”.