There’s no such thing as a vote that doesn’t matter. It all matters. And after we have achieved historic turnout in 2008 and 2012, especially in the African-American community, I will consider it a personal insult, an insult to my legacy, if this community lets down its guard and fails to activate itself in this election. (Applause.) You want to give me a good sendoff? Go vote. (Applause.) And I’m going to be working as hard as I can these next seven weeks to make sure folks do. (Applause.)

A few days ago, Michelle and my mother-in-law and the girls and I, we snuck over and got an early look at the new Smithsonian National Museum of African American History and Culture. (Applause.) We looked at the shackles that had been used to bring folks over. We saw the shacks that slaves had been trying to make a way out of no way. And then, with each successive level, we saw the unimaginable courage and the struggles, and the sacrifices, and the humor, and the innovation, and the hope that led to such extraordinary progress, even in our own lifetimes.

And it made us proud. Not because we had arrived, but because what a road we had to travel. What a miracle that despite such hardship, we’ve been able to do so much. (Applause.) And I know everybody in this room understands that how progress is not inevitable. Its sustainment depends on us. It’s not just a matter of having a black President or First Lady. It’s a matter of engaging all of our citizens in the work of our democracy.

All those ordinary people, all those folks whose names aren’t in the history book, they never got a video providing a tribute to them — that’s why we’re here. That’s how progress is sustained. And then it’s a matter of electing people to office who understand that story, who feel it in their hearts, in their guts, and understand that government can’t solve all our problems but it can be a force for good. 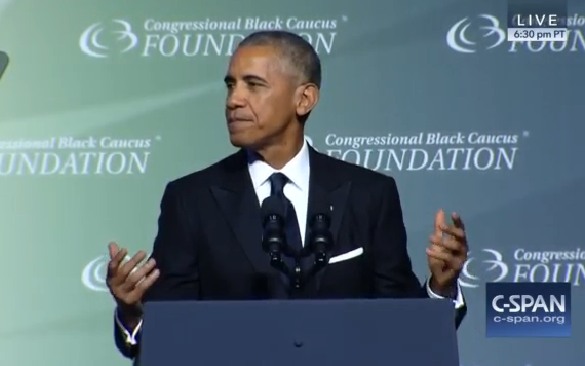