Back in early April, Charles Pierce wrote about the sentencing phase of the Boston Marathon bomber trial. Dzhokhar Tsarnaev had been found guilty and the jury would now decide his fate: life in prison or the death penalty. (Note: The death penalty was abolished in Massachusetts in 1984 but the federal courts still allow it.)

Yesterday, after thinking it over for 15 hours, the jury in Massachusetts decided to kill Tsarnaev. 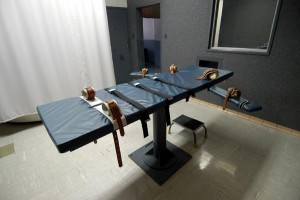 Boston Marathon bomber Dzhokhar Tsarnaev was sentenced to death by a U.S. jury on Friday for helping carry out the 2013 attack that killed three people and wounded 264 others in the crowds at the race’s finish line.

After deliberating for 15 hours, the federal jury chose death by lethal injection for Tsarnaev, 21, over its only other option: life in prison without possibility of release.

The same jury found Tsarnaev guilty last month of placing a pair of homemade pressure-cooker bombs on April 15, 2013, as well as fatally shooting a policeman.

Eric Rudolph is still alive. Ted Kaczynski is still alive. The blind sheikh is still alive. Zacarias Moussaoui is still alive. I mention all of this because the trial phase of Dzhokhar Tsarnaev ended today with his being convicted on all 30 counts relating to the Boston Marathon bombing. In reality, of course, these entire proceedings merely were an extended penalty phase. Tsarnaev’s legal team conceded his role in the crime right from the start. Now, acting through the jury, we will decide whether to kill him or not.

There’s no point in rehashing all the arguments on either side. There’s no point in trying to make the absurd measured moral choice that Tsarnaev deserves to die while Rudolph and Kaczynski — and Moussaoui, convicted of participating in the greatest mass murder in the country’s history — deserve to live out their sunless lives in a SuperMax somewhere. You can say kill ’em all, but we haven’t, and we don’t …

The question becomes, as it always does, is the death penalty itself consistent with the distinctly American idea of the rule of law, or do the preposterous ambiguities that we’ve built into our way of killing people, largely to salve our putatively democratic consciences, render the punishment not only cruel and unusual, but cruel and absurd.

And our “shining city on the hill” gets tarnished once again. The international community took note in its universal periodic review (UPR) of our human rights record :

The United States was slammed over its rights record Monday at the United Nations’ Human Rights Council, with member nations criticizing the country for police violence and racial discrimination, the Guantánamo Bay Detention Facility and the continued use of the death penalty.

It is barbaric. It is simply vengeance as it neither provides closure for the victim’s families and friends nor does it deter anyone from committing a similar crime. It is indeed, “cruel and absurd”.