The President spoke about health care in America on Tuesday, June 9, 2015.

(Transcript: Remarks by the President at the Catholic Hospital Association Conference)

On a day in early September of 2009, I received the following letter from Senator Edward Kennedy. He’d written in May of that year, shortly after he learned that his illness was terminal. He asked that it be delivered to me upon his death.

It is a letter about the cause of his career — what he called “that great unfinished business of our society” — health care reform.

“What we face,” he writes, “is above all a moral issue; that at stake are not just the details of policy, but fundamental principles of social justice and the character of our country.”

Senator Kennedy never stopped asking what he could do for his country. Today, tens of millions of Americans are better for it.

And while Teddy didn’t live to see his life’s work signed into law, more than five years after its passage, the spirit of his words ring true. This is, fundamentally, about the character of our country. Doing right by one another.

Tomorrow, I will deliver remarks about health care in America. Get a history of where we’ve been, and let me know you’ll be watching. 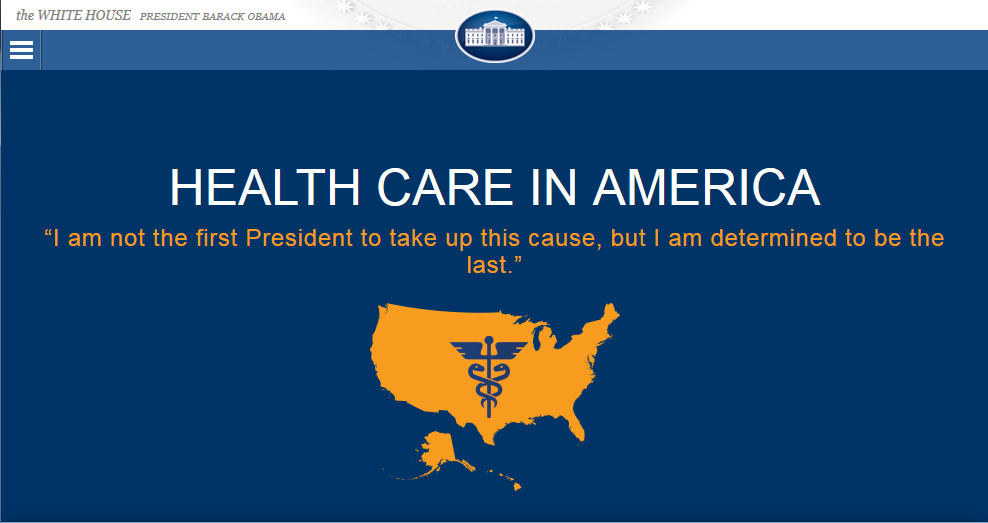 From the White House: Health Care in America

President Barack Obama expressed deep frustration with the U.S. Supreme Court on Monday, questioning why justices even took up a case that imperils his signature health insurance reform plan.

The high court is set to issue a decision on the case, known as King v. Burwell, by the end of the month. A ruling against the government would mean that 6.4 million people in the 34 states relying on the federal Healthcare.gov website would be at risk of losing subsidies that make their insurance affordable.

“This should be an easy case. Frankly, it probably shouldn’t even have been taken up,” Obama said at a news conference after the G-7 summit in Krun, Germany. “Since we’re going to get a ruling pretty quick, I think it’s important to assume that the Supreme Court’s going to do what legal scholars would expect them to do.”

Obama repeated the administration’s contention that there’s no contingency plan or fix to keep insurance markets from going into a tailspin, predicting that the justices would decide in his favor. And in any case, he added, Congress could fix the ambiguous phrasing of the health law “with a one-sentence provision.”

“Let’s be clear: if the Supreme Court rules against the Administration, Congress will not pass a so called ‘one-sentence’ fake fix,” Wyoming Senator John Barrasso, who is leading Republican efforts to craft a contingency plan, said in a statement.[…]

In his statement, Barrasso accused Obama of “bullying the Supreme Court” and said the Republican-led Congress is “prepared to help” Americans who may be harmed.

But is it? Republicans have struggled to coalesce around a contingency plan if the ruling goes their way.

Thune offered this assessment of who would be to blame if the Republican-controlled Supreme Court sides with the plaintiffs in King:

Almost immediately, Thune became an object of ridicule for this tweet. Huffington Post’s Sam Stein quoted the tweet and responded “this makes no sense.” The Week’s Ryan Cooper mocked it with an historic quote — “Stand and deliver, or I shall kill you, and then you will be a murderer!” The New York Daily News’s Josh Greenman wrote just one word: “Um.” The National Review’s Charles C.W. Cooke described Thune’s tweet in twice as many words: “So dishonest.” […]

Should the King plaintiffs prevail, it should be noted, the consequences will go far beyond the mockery Thune experienced. An estimated 9,800 Americans will die every year who otherwise would have lived if the Republican-appointed justices do what so many of Thune’s fellow Republicans have asked them to do.

How Not to Make the SCOTUS Case Against Obamacare, in One Tweet

On its own terms, this was difficult or impossible to parse. The aforementioned six million people living in states that count on the federal exchange to sell plans were not at risk until lawsuits were filed to end the subsidies. If the loss of subsidies was bad for the American people, then how was that the fault of the administration, who argued against the plaintiffs and called the legal challenge dilatory? Thune’s Twitter timeline became a torrent of people wondering what he was talking about. Even conservatives started to ask if Thune realized how tightly he’d been wrapped around the axle.[…]

Republicans had worried that once Obamacare was real, too many people would be making use of the law (and attendant subsidies or Medicaid) [to] form a constituency against it. Even as polls have shown a persistent rejection of the law, the growing number of people who’ve purchased plan—some after their old plans were disrupted by the law—have become a problem. And Thune was punting on the responsibility for bailing those people out.

~
5 Questions Answered On The Legal Challenge To Obamacare Subsidies

2. What happens if the court rules against the Obama administration?

According to the Department of Health and Human Services, more than 6 million people would lose their subsidies in the states where the federal government operates the health insurance exchanges.

An analysis from the Kaiser Family Foundation found that subsidized enrollees would face an average effective premium increase of 287 percent if the court rules against the administration. (Kaiser Health News is an editorially independent program of the foundation).

Florida would have the most people lose subsidies (1.3 million), worth nearly $400 million, with Texas ranked second in both categories (832,000 residents losing $206 million per month), according to the state-by-state analysis.

Even people who weren’t getting subsidies could be indirectly affected by a Supreme Court ruling against the administration. That’s because the elimination of subsidies would very likely roil the insurance risk pool. Without the subsidies, many healthy people are likely to give up their coverage, and that would drive up costs for those continuing to buy insurance.

Individuals in state-run exchanges and the District of Columbia would keep their federal subsidies.

The GOP has 5 plans to fix Obamacare if the Supreme Court blows it up. They’re all a mess.

The justices are about to decide the legality of Obamacare’s insurance subsidies, which currently help 6.4 million Americans pay for their health coverage. If the justices toss out the financial help, it’ll be a coup for Republicans who’ve tried repeatedly to kill the law in Congress and in the courts.

But it will also leave Republicans holding the bag on how to prevent chaos in the insurance market. If lawmakers do nothing — and with the level of gridlock in Washington, there’s a decent chance this happens — many experts say the consequences could be severe. Obamacare premiums would spike on average by 256 percent, leaving many enrollees unable to keep up with the bills. They could decide to pay the much higher prices, or drop their coverage.[…]

Republicans lawmakers have also come up with five alternatives plans to keep the dollars flowing. The question is whether they’ll do much good. Most of the plans would extend the availability of subsidies, while dismantling other parts of Obamacare. The result would likely be a world that looks much more like America before Obamacare — where fewer people are enrolled in coverage and are paying higher premiums.

Two-thirds of people hope that ObamaCare subsidies will be upheld in court later this month, including nearly 50 percent of Republicans, according to a new poll.

A total of 61 percent of people said low-income Americans should be eligible for the subsidies regardless of what state they live in – a question at the center of the looming King v. Burwell case, according to the poll commissioned by the progressive group Americans United for Change.

A majority of people also said they hope Congress will take action if the court rules against the Obama administration. Just 28 percent of people said they’d be less likely to vote for their representative in Congress if he or she decided to fix the Affordable Care Act to preserve the subsidies.