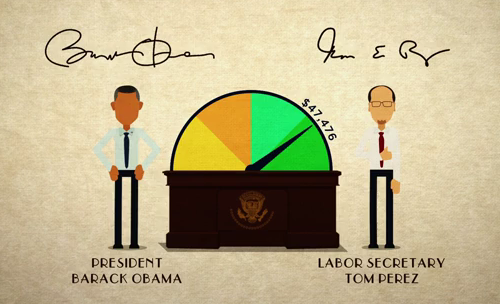 This afternoon, Vice President Joe Biden will travel to Columbus Ohio to speak about the new rules. The live stream will begin at 2:30pm Eastern:

My dad had something he used to say to me:

“A job is about a lot more than a paycheck. It’s about dignity and respect.”

Part of what he meant by that, I think, is that without the ability to provide for your family, you’re deprived of your dignity.

That’s the fundamental spirit behind a big change our Administration made today to modernize our overtime rules: Making sure hard work is rewarded with fair pay.

Starting in December, we’re making sure that more workers get paid fairly for the overtime hours that they work. With this new rule, we’re increasing the cutoff for automatic overtime for salaried workers to $47,476 — most salaried workers making less than $47,476 will be guaranteed overtime pay for working more than 40 hours a week.

Companies will have a choice: Pay their workers for the extra hours they put in, or cap their hours at 40 hours a week. For over 4 million workers, this change means they’ll either get a bump in pay or will get more time with their families if they work more than 40 hours a week. Or more time to go back to school or get additional job training.

Today, I’ll head to Columbus, Ohio to visit a business, an ice cream company called Jeni’s, with 600 employees around the country. They’ve got a management that understands what “fair” means. They’ve already begun making changes to guarantee overtime to some of their managers.

You can learn more and listen in right here.

The law since the 1930s has said that anyone working more than 40 hours a week is working overtime. And if you’re working overtime, you should get paid for it. We can’t allow folks with families to support to work long hours without being paid fairly for it.

It’s not right. So today, we’re doing what we can to fix it.

The President and I have been laser-focused on rebuilding the basic middle-class bargain that used to exist, and that both parties have signed on to. What it comes down to is that if you contribute to the success of the company that employs you, you should get paid fairly for it. Because of the Administration’s efforts to rebuild that basic bargain, the economy has gone from crisis to recovery to resurgence. Wages are on track to rise this year by over 3 percent. Today’s expansion of overtime protections will build on this momentum.

That’s how you increase access to the middle class. But we know we have more work to do and we’re going to keep going right through the finish line.

You can tune in to the event in Ohio right here.

See you out there.