This chart from FiveThirtyEight.com’s election coverage may be the coolest chart of the election season. 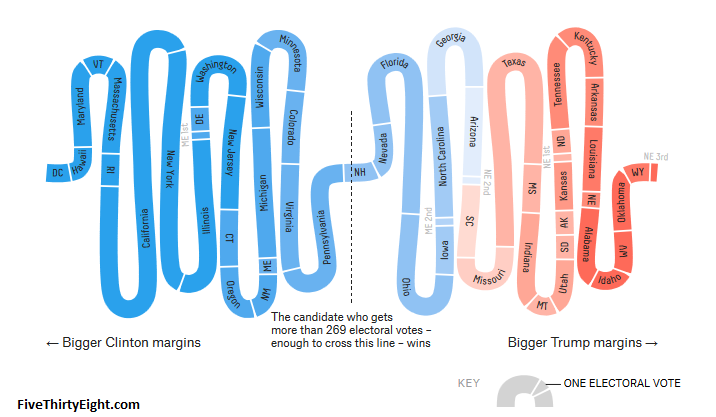 The chart shows the states, sized by their electoral votes, with varying colors from deep blue, Democratic sure-things like Washington DC and Hawaii, to deep orange, the Republicaniest of them all, Dick “Dick” Cheney’s Wyoming and Nebraska’s 3rd Congressional District.

Right now, the Big Blue Path has 269 electoral college bricks in it. One more deep blue brick put in place will lock Hillary Clinton in at 270. Will it be from New Hampshire where the latest polls show a 10 point lead? Or Nevada or Florida?

Remember: Polls don’t vote, people do. Also remember: in every state, even ones where Hillary Clinton will not get a single electoral vote, your vote is your voice shouting out your opinion about which party should be in the White House:

… every single vote cast for [the Democratic Party’s presidential candidate] in a red state is a vote against the Republican agenda and a reminder to everyone that you are there and YOU ARE NOT GOING AWAY.

Get out the vote – get out and vote. Because when we vote, we win.