This initiative was discussed last year, in Democrats Unveil a Plan to Fight Gerrymandering, but neither Obama or Holder were mentioned.

The Democratic Governors Association is creating a fund dedicated to winning races in states where governors have some control over congressional redistricting, the party’s first step in a long-range campaign to make control of the House more competitive.

Billed as “Unrig the Map,” the effort will target 18 of the 35 states in which governors play a role in redistricting, and where new congressional maps could allow Democrats to win House seats that are now drawn in a way to favor Republicans. The fund will be used for governors’ races over the next five years, leading up to the 2020 census.

Democratic officials said that they hoped to raise “tens of millions” for the effort and that they believed they could gain as many as 44 House seats if lines were more favorably redrawn in the 18 battleground states. Many of those states still have Republican-controlled legislatures, but with Democratic governors in place they could at least veto the next round of congressional maps and send the disputes to the courts.

Curious, since I hadn’t heard of this effort, I looked up Unrig the Map

The Map Is Rigged

In 2012, Democratic congressional candidates won 1.4 million more votes than Republicans – but Republicans easily won control of the House of Representatives. Why? Because Republican governors and state legislators implemented a state-by-state plan in 2010 to gerrymander legislative districts with hyper-partisan maps. It’s time to fight back – and one of the best ways to fight back is by electing Democratic governors in key states before the 2020 redistricting. The DGA’s 2020 redistricting project will work to win targeted gubernatorial races that are key to redistricting. By winning these races, we have an opportunity to transform the Congress and impact public policy across the country. It’s time to unrig the map. The DGA will be targeting Arkansas, Colorado, Florida, Georgia, Indiana, Kentucky, Louisiana, Maine, Michigan, Missouri, Nevada, Ohio, Pennsylvania, South Carolina, Texas, Virginia, West Virginia, and Wisconsin.

I have a strong feeling that with Holder at the helm, and with POTUS involved, the newly revitalized group will have a real impact, and will be able to raise the money they will need to make it happen.

I have been thinking about gerrymandering a lot, recently, and was surprised when I brought it up in class, my students didn’t know what it was. (sigh- another problem with no education in civics). I decided to see what I could find to pass on to them.

This WaPo piece is a really good informational read:

Thirty years ago, the Supreme Court expanded the meaning of one of the most important civil rights laws in U.S. history — the Voting Rights Act of 1965. Among other things, the court prohibited a then-common practice among some states of spreading minorities across voting districts, leaving them too few in number in any given district to elect their preferred candidates. The practice became known as “racial gerrymandering.”

The court’s solution required that states create majority-minority districts — districts in which the majority of the voting-age population belonged to a single minority. With voting that occurred largely along racial lines, these districts allowed minority voters to elect their candidates of choice. But a fascinating development occurred in the years since. These districts, rather than giving African Americans more political power, might have actually started to deprive them of it. Majority-minority districts, by concentrating the minority vote in certain districts, have the unintended consequence of diluting their influence elsewhere. Experts say some Republican legislatures have capitalized on this new reality, redistricting in their political favor under the guise of majority-minority districts.

“Typically the goal in [packing minorities into a district] is not to reduce minority representation in the adjacent districts; it’s to reduce Democrats’ representation in those districts,” said Nicholas Stephanopoulos, a professor at the University of Chicago Law School. “They’ve been arguably using the racial demographics as a way to enact a Republican gerrymander.” 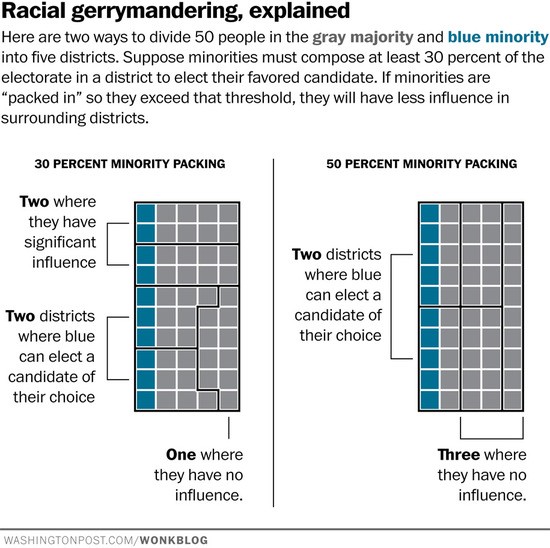 What was even more fascinating was this video piece, which calls into question our entire system of “winner take all” elections.

Sorry there is no transcript available. Well worth watching and food for thought.

The Devil in Democracy – The Cause & Cure For Institutionalized Racism

Are you concerned about the Senate and their inordinate powers with respect to the confirmation of Supreme Court justices? Are you concerned about the explosive problems with race in the US? Then you’ve come to the right place. What if the cause for all gerrymandering and institutionalized racism is also a source for massive corruption and partisanship? More importantly what if all three problems can be fixed simply, perfectly and democratically? No quotas. No lines in the sand. Just equality. That is the focus of this video, which dives into a seemingly tiny compromise the Founding Fathers made in 1789 involving the most powerful special interest of the day – slavery.

“Proportional representation is the principle that a legislature should reflect all of the voters who elect them. Like-minded voters should be able to elect representatives in proportion to their number. In contrast, most elections in the United States are winner-take-all: instead of reflecting all voters, our legislators reflect only the biggest or strongest group of voters that elected them, leaving all others unrepresented. The use of winner-take-all voting methods in our elections for state legislatures and Congress is a central reason for major problems with our politics: gerrymandering, partisan gridlock, no-choice elections and distortions in fair representation all have roots in the inherent problems of winner-take-all methods.” – FairVote

Multi-member districts (MMDs) are electoral districts that send two or more members to a legislative chamber. Ten U.S. states have at least one legislative chamber with MMDs – A multi-member electoral district (MMD) is an electoral district electing more than one representative to office. All proportional representation systems use MMDs, simply because it is impossible to distribute anything proportionally if there is only one seat. In proportional systems, the simple rule is that the larger the district size the more proportional the system. Other systems using MMDs are Block Vote, Party Block Vote, Mixed Member Proportional systems and Parallel systems.
Multi-member Super District Voting in the House of Representatives would eliminate gerrymandering entirely. By James D’Angelo EDIT May 21, 2016: Since I posted this video this problem becomes even more salient. This is because the US Senate is actually better equipped to serve minorities than most institutions on Earth. While the House has NO protections for minorities, the Senate has many (UCAs, filibuster, 60-40 splits, etc). These are powerful tools that dramatically serve minorities (of all types both political and racial). We also select a number of our presidents from the ranks of the Senate, so the lack of minority representation effects everything else as well (Presidency and the Supreme Court).