[The Washington Republicans are] calling it the American Health Care Act: the AHCA. But they should call it the BBBA: the Big Breaks for Billionaires Act. That’s because you pay more, you get less, while billionaires get all the breaks. […]

Well, this week, they were finally forced to put their cards on the table.

And it turns out they’ve been bluffing.

Because when you get past the smoke and mirrors of President Trump’s repeal plan, it’s clear they’ve dealt America a bad hand. […]

It means raiding 170 billion dollars from the Medicare Trust Fund, shortening the solvency of this vital lifeline for our seniors by three years. It means putting rural hospitals and small clinics on life support.

And it means taking coverage away from about 10 million Americans – including tens of thousands of farmers, factory workers and hardworking families across Illinois! 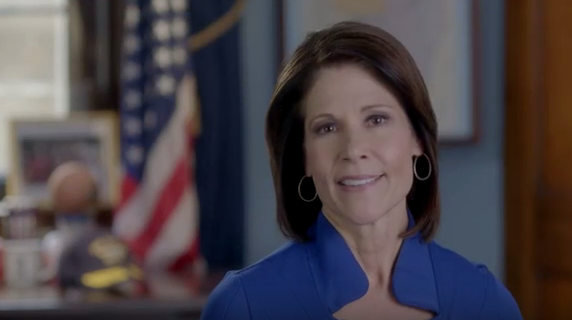 “I come from America’s heartland – the Illinois Quad-Cities, along the banks of the Mississippi River.

“For 17 years as a journalist, I asked the tough questions to hold the powerful accountable.

“Later, I worked at a non-profit health system where I helped families in our community get the care they needed.

“And today, I’m proud to represent the more than 7,000 square miles and 14 counties of the rural, 17th Congressional District of Illinois.

“As a proud daughter of the Midwest, I learned early on about the importance of looking people in the eye, hearing their stories and telling them the truth, even if it’s not always easy.

“But, unfortunately, when it comes to the Washington Republicans’ health care bill, it’s an ugly truth.

“They’re calling it the American Health Care Act: the AHCA. But they should call it the BBBA: the Big Breaks for Billionaires Act. That’s because you pay more, you get less, while billionaires get all the breaks.

“For years, we’ve heard one promise after another from Washington.

“Not all that long ago, President Trump said it very clearly. He told you directly he’d deliver ‘insurance for everybody’ – that is a direct quote.

“Well, this week, they were finally forced to put their cards on the table.

“And it turns out they’ve been bluffing.

“Because when you get past the smoke and mirrors of President Trump’s repeal plan, it’s clear they’ve dealt America a bad hand.

“Here’s what their bill will actually mean for you.

“It means less coverage and higher costs for working families, for seniors, the disabled and for children.

“Your deductibles, co-pays and out of pocket costs for basic coverage are too high already. We know that. But their plans makes it worse.

“It means insurance companies charging you 30 percent more if your coverage lapses. It means making older Americans pay five times more than others for their health care.

“It means raiding 170 billion dollars from the Medicare Trust Fund, shortening the solvency of this vital lifeline for our seniors by three years. It means putting rural hospitals and small clinics on life support.

“And it means taking coverage away from about 10 million Americans – including tens of thousands of farmers, factory workers and hardworking families across Illinois!

“While his plan costs you more and takes coverage away from the people who need it the most, Washington Republicans found a way to give massive tax breaks to the CEOs of health insurance companies, as well as to America’s billionaires.

“That’s right, we’re back to those days again.

“The 400 richest Americans are each going to get a 7 million dollar tax break every single year. And even though that’s not an alternative fact, it sure is unbelievable.

“Right now, we need a little Midwestern sensibility to solve the challenges we face.

“We need to work together to lower out-of-pocket costs and make prescription drugs more affordable.

“But the fact is, their proposal would take us in the wrong direction.

“As one of just 12 Democrats from a Congressional district that Donald Trump won, I’m here to tell you that the tide has turned, on factory floors and in grocery store aisles, in big cities and in small towns.

“Men and women from all backgrounds are coming together and demanding accountability from Washington.

“They want leaders who will stand up and fight for them.

“We hear you and we’re ready to stand up for the values that unite us and fight to get real results for hardworking families.

“Get active in your community and work with us to build a better future for our children, our seniors and our families.

“Together, we can, and we will protect the economic and health security for all Americans.

It’s been 7 weeks since the President’s inauguration. Since then, we still have not seen any jobs bill come forward from the President, no jobs proposal, no infrastructure plan, no movement on renegotiation of NAFTA.

There are a few things you should know about this bill. The Republican bill is one of the largest transfers of wealth from working families to the richest people in our country. Robin Hood in reverse. The richest 400 families in America will get a $7 million tax break each year, to the tune of a $2.8 billion break every year. It is $600 billion moving from working class families to the richest families in our country. That means those people, plus others.

Seniors will see the lifetime of the Medicare Trust Fund shortened by 3 years. They take $150 billion out of the trust fund, shortening the trust fund by 3 years. We had lengthened it in the Affordable Care Act. But that’s in keeping with the Republicans’ line on Medicare, that it should wither on the vine. So they are shortening its solvency.

And that’s in keeping with also what they want to do in other legislation, the Ryan budget, to remove the guarantee for Medicare and have it just be a voucher and not a guarantee. Medicare by definition is a guarantee. So you are undermining that guarantee.

And millions would lose access to essential Medicaid coverage, not only critical for poor children in our country, but for Americans with disabilities, for seniors with long term care needs, and to fight against opioid and other addictions.

Young people, who are likely to face an interruption in coverage, will suffer what the young people call a millennial penalty, a Republican surcharge on enrolling after a break in coverage.

So if you are a senior, if you are a person with disabilities, anyone affected by the opioid epidemic, a poor child, a woman, or a young person, the list goes on and on, you are grossly affected by this legislation. That’s why groups that deal with diabetes, cancer, cystic fibrosis, HIV/AIDS, the list goes on and on, Easter Seals, are opposed to this legislation.

Republicans are racing this bill forward before the CBO can truly expose the consequences, the catastrophic consequences of their health bill, and this is in stark contrast to when we passed the bill. I see in the press people said, “Well, you’re criticizing them for what you” – no, that’s not true.

The facts are these. We had scores of hearings, open hearings, bipartisan hearings in the three committees of jurisdiction, Ways and Means, Energy and Commerce, and Education and Labor; hours of public markup; dozen of Republican amendments accepted. We never had a markup or floor vote without a CBO score to show what was happening, what the impact of the bill would be.

Now, what’s interesting, because, as I said to some of you yesterday, Speaker Ryan, then as Ranking Member of the Committee on the Budget, signed a letter to [CBO Director] Doug Elmendorf, along with the other Committee’s Ranking Members of Energy and Commerce, Ways and Means, and Education and Labor, saying that we shouldn’t proceed until we had a CBO report, which we fully intended to wait for. We had already asked for it and had our markup scheduled well into the future of receiving that.

So in his letter the Speaker says – it references that the House Speaker, that would be me, has indicated the legislation would be marked up before the committees of jurisdiction and debated on the House floor beginning the beginning of August. This is a letter in June. We had already requested the CBO report.

And then it goes on and on. You have this letter, so you can read the rest of it. But the fact is he was asking for, appropriately, for things that we had asked for, too, from the CBO. And now, as Speaker of the House, he is saying, what do we need a CBO report for, we can just go mark it up.

And did I say when we did ours we had – our bill was out there about 30 days before we ever even voted on it. So this is something that they put out in the dark of night on Monday, go overnight.

What do the Russians have on Donald Trump politically, financially, and personally? What is that connection? What would the tax returns tell us about that? And we need a bipartisan, independent, nonpartisan outside investigation to get to the bottom of that.

On Monday, the President again put forth his executive order seeking to reinstate the Muslim ban and refugee ban. The Trump administration’s insidious, I call it, repackaging has done nothing to change the immoral, unconstitutional, and dangerous goals of the ban. This is the same ban, with the same purpose, driven by the same dangerous discrimination that weakens our ability to fight terror. The President’s conduct over the weekend emphasizes how little regard he has for reality, the contempt he has for evidence and facts.

I am deeply concerned about their willingness, in fact almost bragging about separating parents from children, mothers from children at the border. I am going to go to the border again, revisit the border again over the weekend to see firsthand, because they said, “Oh, you can’t believe what you read in the paper. We know how to take care of kids. We can put them in foster homes.”

That’s the attitude of this administration, separating children from their parents. Something’s wrong with that. But protecting the American people, which is what we all take an oath to do, and what the President says is his reason for separating mothers and children, requires us to be strong and smart, not reckless, rash, and cruel.

So again, on three fronts, of course, the Affordable Care Act and all that it means to families is very important. The United Methodist Church, in their statement, said people will die because of efforts like this to roll back health care. AARP, the American Medical Association, the hospital association, nurses and physicians, patients, insurers, and consumer groups all oppose the GOP bill. The more we learn about the proposal, of course, the more we see it as a plan that will make Americans pay more for less.