The Weekly Democratic Party Address was delivered by Rep. Bennie Thompson from Mississippi:

“Congress must act and act immediately. We must get the truth about Russia’s meddling and the full extent of the Trump Campaign complicity. But we must also take action to protect our elections and our election infrastructure next time.

“That is why House Democrats launched the Congressional Task Force on Election Security, which I am proud to co-chair with Congressman Brady from Pennsylvania.

“This task force’s central mission is to focus on how to bolster the cyber and physical security of our election system ahead of the 2018 election. […]

“While elections are the exclusive responsibilities of the states, the Federal government has a responsibility to step up and help, where needed, to support states as they work to prevent the Russians or other bad actors from disrupting and interfering with our elections.

“Protecting the integrity of our election system should not be a partisan concern. We hope House Republicans will join us. 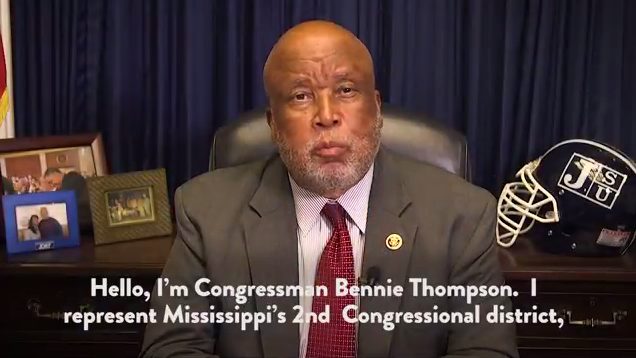 “Hello, I’m Congressman Bennie Thompson. I represent Mississippi’s 2nd Congressional District, and I am the top Democrat on the Committee on Homeland Security.

“Nearly everyone outside the White House accepts the Intelligence Community’s conclusion that Russia carried out the hacking campaign in an attempt to influence the outcome of the 2016 Presidential Election.

“And this week, in Donald Trump Jr.’s emails, we saw the first public evidence that the Trump Campaign eagerly intended to collude with Russia.

“All of this has damaged Americans’ faith in our democracy and confidence in the security of our voting systems.

“In fact, just this week, one poll found one in four respondents reported that they may not vote in the next election because of cybersecurity concerns.

“This is not acceptable. Congress must act and act immediately. We must get the truth about Russia’s meddling and the full extent of the Trump Campaign complicity. But we must also take action to protect our elections and our election infrastructure next time.

“That is why House Democrats launched the Congressional Task Force on Election Security, which I am proud to co-chair with Congressman Brady from Pennsylvania.

“This task force’s central mission is to focus on how to bolster the cyber and physical security of our election system ahead of the 2018 election.

“It will be a forum for Members of Congress to hear from experts in cybersecurity and election infrastructure and identify actions that should be taken to help ensure the integrity of our election systems and guard against future attacks.

“While elections are the exclusive responsibilities of the states, the Federal government has a responsibility to step up and help, where needed, to support states as they work to prevent the Russians or other bad actors from disrupting and interfering with our elections.

“Protecting the integrity of our election system should not be a partisan concern. We hope House Republicans will join us.

“Unfortunately, we have a President who shows no interest in preventing last year’s election interference from happening again. The Department of Homeland Security is also wavering over whether our election infrastructure should be designated part of our country’s critical infrastructure.

“Here in Congress, Republican leaders have displayed no appetite to tackle this critical homeland security issue – or even hold hearings.

“If we continue to do nothing, we make it easy for Russia and other nefarious actors to meddle in future elections.

“We must put politics aside for the good of the country and work together on this and so many other important issues to the American people.

“I thank you for your attention and urge you to stay engaged. Our Democracy demands your involvement.”

“Russian Interference in 2016 Elecion – House Democrats announced a plan to try to force their Republican colleagues to vote on matters relating to Russia and the 2016 elections. Minority Leader Nancy Pelosi (D-CA) and other Democrats held a news conference to talk about their plan to offer resolutions of inquiry.”

Very interesting week. And this month, when we celebrate the Declaration of Independence, the Fourth of July, the courage of our Founders, and remember that we all, as Members of Congress, and any other person in public life takes a sacred oath. We solemnly swear that we will support and defend the Constitution of the United States against all enemies foreign and domestic, so help me God.

This week we saw cold, hard evidence of the Trump campaign and indeed the Trump family eagerly intending to collude possibly with Russia, a hostile foreign power, to influence American elections. In the month, again, as we celebrate the courage of our Founders, Republicans in Congress have become enablers of the Trump-Russia assault on our democracy.

After these latest revelations, it is becoming clear we have suffered a desecration of our democracy not seen since Watergate. Speaker [Paul] Ryan must allow a vote on an outside, independent commission to get to the bottom of the Trump campaign’s role in Russia’s assault on our democracy and prevent Putin from ever doing it again, immediately – outside, independent commission.

I’ve asked over and over again, what do the Russians have politically, personally, or financially on Donald Trump that we, the American people, should know? Why are the Republicans continuing to hide the truth?

Instead of defending the integrity of American democracy, instead of holding the Trump White House accountable for its complicity, instead of showing Russia that there will be consequences, the House Republican majority does nothing.

The GOP must immediately join us in a call for the release of all communications within the Trump campaign and within the family, by email, text, Twitter or any other direct message.

Six months into this Congress, the Republicans still have not put forward any jobs bill, any bill to raise wages, create good paying jobs. There has been no budget, no infrastructure bill, no tax reform, no plan to avoid a catastrophic default on the full faith and credit of the United States of America.

Republicans are advancing an agenda that will create needless suffering in the lives of families in every part of America, manifested today on their latest iteration on Trumpcare.

Over the Fourth of July recess, Republicans heard an earful from constituents frightened and angry about what Trumpcare would do to them and their loved ones: higher costs for fewer benefits, gutting key protections, a crushing age tax, stealing from Medicare and Medicaid, and, again, millions of people losing their coverage.

This Senate bill now that is circulating does even deeper damage to Americans with Medicaid. The President has called the House bill mean. This is even meaner. The Republicans will do all this to damage seniors, children, and working families just to hand tax breaks to the richest.

And, by the way, it hits not only our working families and seniors and the rest, but veterans within those families, sick and disabled children, people in rural hospitals or served by rural hospitals.

As ever, the stories of families who will suffer are the most eloquent. Nothing is more eloquent to a Member of Congress than the voice of his or her own constituents, and those stories and the outside mobilization of the outside groups who are involved in the sit-ins and town hall meetings and call-ins and the rest and presenting the stories, they keep turning up the heat on Trumpcare. When people know, people will act upon it, and hopefully their Representatives in Congress will represent them.

Earlier today, I called upon Republicans to withdraw their mean-spirited and discriminatory Hartzler amendment [to the National Defense Authorization Act] targeting transgender service members in the defense bill. This amendment reverses so much of the work of bipartisan efforts to repeal Don’t Ask, Don’t Tell policy.

On another subject, in terms of Russia, I am also pleased to join Whip Hoyer and Ranking Member Engel to introduce the strong Russia sanctions bill, overwhelmingly passed in a bipartisan way, 98 to 2, in the U.S. Senate.

So it’s just addressing two things that are happening legislatively on the floor yesterday and today.

Just in closing, I want to say I’m so saddened by the news of Liu Xiaobo’s passing today. Two weeks ago, I was pleased to join Representative Chris Smith, the co-chair, with Senator [Marco] Rubio, Co-Chair of the Congressional Executive Commission on China, as the House overwhelmingly passed a bipartisan resolution calling for the unconditional release of Liu Xiaobo and his wife Liu Xia.

The world grieves the loss of one of the great moral voices of our time. We had hoped that the Chinese – they mistreated him in prison, contributed to his illness – we had hoped that they would allow him to leave the country to receive medical care. They did not. It’s a sad day.

I had the privilege of going to Oslo when he received the Nobel Peace Prize. I was honored by the invitation by his family to be part of the delegation. As you probably remember, he was not able to leave China, so they had an empty chair. But his presence was felt because of his values, his writings, and it’s sad to see his passing.

With that, I’m pleased to take any questions.

With the revelation of Donald Trump Jr., Jared Kushner and Trump Campaign Manager Paul Manafort meeting with a Russian lawyer, a former Russian counter-intelligence agent and [insert names of possible others here] to obtain ‘high level and sensitive information’ to influence the 2016 presidential election, no one is laughing now.

Links to news reports and opinion pieces are at the newsroom link.