The Weekly Democratic Party Address was delivered by Representative Rosa DeLauro of Connecticut, Co-Chair of the Democratic Steering and Policy Committee.

(Rep. Rosa DeLauro is calling Republicans out for helping corporations and the wealthy rig the game against the middle class.)
Rep. DeLauro:

The Republican plan repeals the estate tax, giving America’s wealthiest families over $171 billion in tax cuts. That is the same cost as the entire Pell grant program for nearly 5 years, which helps over 7 million low income college students every year. Where are our priorities?

“Instead of giving $1.5 trillion in tax cuts to the wealthiest Americans and corporations, we should be investing in the future of our country by rebuilding our crumbling infrastructure, expanding access to early childhood education, and equipping workers with the skills they need through job training and apprenticeship programs.” 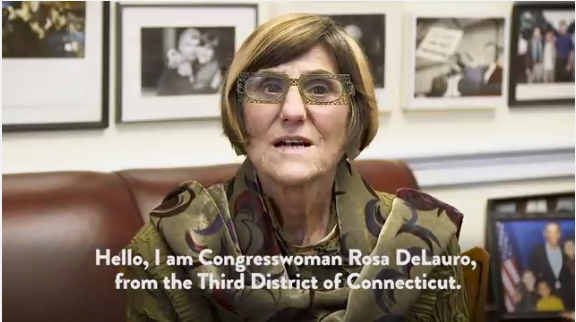 “Hello, I am Congresswoman Rosa DeLauro, from the Third District of Connecticut.

“The biggest economic challenge of our time is that so many people who play by the rules are in jobs that do not pay enough to live on. Wages are not keeping up with rising costs – for health care, child care, and housing – and too many families struggle to make ends meet, let alone put money in a college fund or go on vacation.

“Meanwhile, big corporations, millionaires, and billionaires write the rules to make government work for them – and Republicans are their comrades in arms in rigging the game against the middle class. Enough is enough.

“As Democrats, we will work for an economy that works for all, not just the very rich. We need to create good paying jobs that cannot be outsourced – lower the cost of living for families by cracking down on corporate monopolies – and build an economy that enables more and more people to reach the middle class.

“That is the America I believe in – and the one Democrats are fighting for.

“Unfortunately, Republicans want to take our country further and further from this goal. On Thursday, they released their tax cut proposal – and frankly, it is a giveaway to corporations, millionaires, and billionaires. It leaves behind working people and the middle class. And worse, it will encourage companies who outsource American jobs. Congress must put middle class families and jobs before corporations that have not been loyal to their employees and to our country.

“The tax plan released by President Trump and Congressional Republicans is not real tax reform. Instead, it cuts taxes for the wealthiest Americans and raises taxes on middle class families.

“It slashes the tax rate for corporations, repeals the estate tax, and encourages multinational corporations to shift profits and jobs overseas. It also rewards those corporations that have outsourced jobs by allowing them to skip paying taxes on profits earned through their outsourcing.

“When jobs are outsourced, it drives down wages and salaries here. The Republican plan is wrong – this plan encourages corporate excess at the expense of the middle class, who work hard and who have played by the rules their entire lives.

“The Republican plan repeals the estate tax, giving America’s wealthiest families over $171 billion in tax cuts. That is the same cost as the entire Pell grant program for nearly 5 years, which helps over 7 million low income college students every year. Where are our priorities?

“Instead of giving $1.5 trillion in tax cuts to the wealthiest Americans and corporations, we should be investing in the future of our country by rebuilding our crumbling infrastructure, expanding access to early childhood education, and equipping workers with the skills they need through job training and apprenticeship programs.

“Where are the Republicans’ values? Where is this administration’s commitment to the ‘forgotten men and women of our country?’ They promised no more politics as usual, and this is a slap in the face that leaves people feeling betrayed. We need a tax policy that works for the middle class.

“Turning to the Child Tax Credit, the Republican proposal leaves behind vulnerable families – shutting out military families, rural families, large families, minimum wage earners, and those with the youngest children. Under the Republican tax plan, many families will not earn enough to benefit from the larger child tax credit. And Republicans have raised the income limit on the credit to an amount that will make Members of Congress eligible – while low income families are excluded. This is unacceptable.

“I came to Washington to fight for the hardworking people I represent – not those with the most lobbyists. It is time for a better deal for Americans – one that prioritizes job creation, rising incomes, and a 21st century economy that levels the playing field for them. We must reject this misguided Republican proposal, and work to implement public policies that understand people’s lives and the need for a big change in our country’s direction. Thank you.”

Good morning, everyone. It’s a morning in which we are waiting in anticipation to see what further harm the Republicans will do with their deficit increasing, job killing, tax-cutting for the rich bill that they are going to present today.

But what we do know is what they have voted on already, the budget, which is the framework for where we go from here.

Today they have started to unveil a tax bill designed to plunder the middle class in order to put [more money] into the pockets of the wealthiest 1 percent.

While Republicans ambush the American people with this half-baked tax bill, written in the dark, to be raced through Congress before it is understood, we already know some of what to be the truth.

It raises taxes on the middle class, millions of middle class families across the country; borrows trillions from the future, from our children and grandchildren’s future, to give tax cuts to the wealthiest; encourages corporations to ship jobs overseas.

Democrats want real bipartisan tax reform. We have always said we stand ready to join the Republicans at the table to produce growth, to create good paying jobs that reduce the deficit, that help keep America number one.

Instead, the Ryan-McConnell framework is not reform. It is, again, a deficit exploding, multi-trillion dollar giveaway to the wealthiest and the corporations, delivered on the backs of our children, our seniors and hard-working Americans.

The priorities of the Ryan-McConnell bill have been clear from the start: perpetuating a catastrophic transfer of wealth from the middle class to corporations and the wealthy. Say it over and over.

Now, here’s the thing. It’s really so punitive to certain states and, to California, it is devastating. It removes over $100 billion of possible tax deductions against – over $100 billion for our state. Did they ever check with our economic or our finance department in our state to see what the impact would be on that state? No.

So every single California Republican voted for a budget resolution that made it possible for this harm to come to our state and we want their constituents to know about it, because we think if the truth is there, then perhaps they will change their vote or weigh in to get rid of these harmful deductions to the middle class, to our great state, and to the America people and to the middle class across the country.

And with that, I want to yield to our distinguished Chair of our California Delegation, Congresswoman Zoe Lofgren, who has brought such a large array of our beautiful diversity of California here, to talk about how we always think in a Democratic and Republican way, in a nonpartisan way, about representing the Golden State, and now our colleagues have gone off this deep end. We want to pull them back.

Already, it is clear that the Republicans are not being really truthful about whom the tax bill benefits. A tax analysis done by the New York Times found that the Ryan-McConnell Tax Bill would actually raise taxes on 13 million taxpayers who earn under $100,000 a year.

Again, this bill raises taxes on the middle class, adds trillions to the debt while giving tax cuts to the wealthiest Americans and corporations while stripping credits and deductions from middle class families, includes tax incentives for corporations to ship jobs overseas. It ransacks the budget of Medicare and Medicaid – a trillion dollars cut from Medicaid, half a trillion cut from Medicare, the same amount Republicans give to tax cuts to corporate America. Decrease the corporate tax rate by a trillion and a half, then take a trillion and a half out of Medicare and Medicaid.

We are honored today to be joined by men and women and children who will speak directly to the consequences of the Ryan-McConnell bill. They are speaking for the families and communities that Republicans did not want you to listen to – they did not want you to hear – hard-working families who will bear the pain while corporate America gets a buffet of tax give-aways. They are just a tip of the iceberg of the suffering of the GOP bill. We thank them for taking time to share their stories.

In what President Trump calls a ‘major, major tax cut’ and a ‘giant tax cut for Christmas,’ House Republicans have unveiled their long-awaited tax bill just to confirm what we already knew: the GOP tax plan will have ruinous consequences for workers and middle class families, while the wealthiest and corporate America will be handed a multi-trillion dollar giveaway in tax cuts.

The American people aren’t falling for GOP claims that this bill is ‘real relief’ for hard-working families. According to a new ABC News/Washington Post poll, only 13% of Americans believe the Ryan-McConnell tax bill will actually help the middle class. It’s already clear that the GOP tax bill is very bad news for middle class America.

News and opinion from the media are at the link.