The Weekly Democratic Party Address was delivered by Senator Richard Blumenthal of Connecticut.

“From President Trump’s repeated campaign promises, we know that Judge Kavanaugh poses a grave threat to women’s health care and the weakening of Roe v. Wade. We know he will vote to effectively eliminate the Affordable Care Act and undermine protections for millions of Americans who suffer from pre-existing conditions, including more than 500,000 Connecticut residents,” said Senator Richard Blumenthal (D-CT). “My colleagues and I are often asked by constituents: what can we do? The answer is stand up and speak out. It’s a call to action. Mobilize your neighbors and galvanize the American public – just as we did during the health care debate, when they tried time and again to ram through Trumpcare. The risk to our healthcare system is just as great now as it was then.” 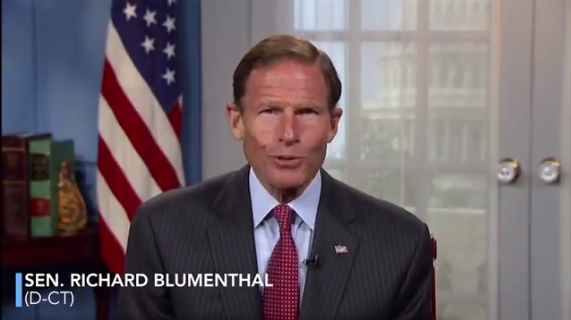 This week the President announced his Supreme Court nominee, who will seek to reverse generations of progress for Americans’ health care and for Roe v. Wade.

Judge [Brett] Kavanaugh’s comments make abundantly clear that he will expansively rule against women’s reproductive rights and freedoms and move to destroy Roe v. Wade. A speech praising [Chief Justice William] Rehnquist for his dissent – he gave a speech, not probably well-known but praising Chief Justice Rehnquist for his dissent in Roe v. Wade.

Again, you all know he ruled against a young undocumented woman’s right to choose.

And, again, those two issues, I think, have such an impact on people’s personal lives that are imminently in danger, the Roe v. Wade and health care. But in addition to that, the over-arching concern about the separation of powers, checks and balances, his kow-towing to the President, effectively saying that the President is above the law.

The President has said, we will repeal Roe v Wade. It ‘will happen automatically.’ So we know what this is about. And it is a very dangerous, dangerous prospect.

So hopefully, the American people will make their voices heard to the Senate.

The [nominee] has given every indication that he would be receptive to the Republican campaign to destroy the health care law of the land, shattering protections, pre-existing conditions protections for over 130 million Americans and their families.

Judge Kavanaugh’s belief in vast presidential authority suggests he believes, again, that the President is above the law.

Democrats in the House and Senate will continue to drive home what’s at stake in the Supreme Court battle in the personal lives of Americans.

The American people aren’t better off from their flat real wages, as CEOs and shareholders hoard their tax scam with windfalls and deny workers the bigger paychecks they deserve and by some, promised.

Families aren’t better off from the staggering debt burden on our children’s future from the GOP tax scam for the rich that added up to $2 trillion or more to the national debt, endangering, as they did with their follow up budget, cuts in Medicare, Medicaid, and Social Security disability benefits. Very clear, they’ve endangered Medicare, Medicaid and Social Security benefits because they have a big debt that was incurred by the tax scam.

And families are not better off from the GOP’s cruel, the cruelty of their health sabotage to drive up health insurance premiums while handing massive tax breaks to pharma companies hiking prescription drug prices.

What a joke. The President said he was going to move for negotiation, ‘I’m going to negotiate like crazy.’ And what did he do but give them license to continue, do some little anecdotal things. And don’t take it from me. Their stock prices went up as soon as he was finished with his statement.

In the courts and in the Congress and in the administration, Republicans are stacking the deck for their wealthy donors and special interests at the expense of the health and economic security of hard-working Americans.

For eighteen months, Americans have seen whose priorities really matter to Republicans in control of Congress, and it is not the priorities of consumers, children, seniors, families, middle class and those who aspire to it.

Families across America are getting a raw deal from the Republicans. Democrats are proposing A Better Deal: Better Jobs, Better Pay, Better Future.

If the President leaves the Putin meeting without ironclad assurances and concrete steps towards a full cessation of Russian attacks on our democracy this meeting will not only be a failure, it will be a great step backward for the future of the international order and global security. A successful meeting means really action now.

But all of the behavior of the President this week, as a continuation of his behavior before, begs the question that I have asked for 18 months: What do the Russians have on Donald Trump, politically, financially and personally?

Because there is no way to explain the disrespect that he’s demonstrating for our NATO alliance, just the lack of understanding of the threat that Russia is, not only to our democratic process, but to undermining NATO, which is a core security alliance.

Today, House Republicans unveil their new slogan “Better Off Now” – trying to convince the American people they are better off now because of GOP policies.

But our question is… WHO is better off now?!

Under Republican leadership of the House, Senate and White House, hard-working families are being offered a raw deal from health care, to taxes, to gas prices and the economy, while the better off are better off now for sure.

U.S. gasoline prices are at a four-year-high this year as a result of the higher price of oil which has reached three-and-a-half-year high in recent weeks.

The increased pump prices are now eating into the disposable income of the average American household that will have a total of $440 less to spend this year on other goods and services because this money is expected to go for buying higher-priced gasoline.

The higher spending on gas could offset one-third of the gains from the tax cuts, with low- and middle-income families feeling the pinch much more than higher-income earners, according to S&P Global economists Beth Bovino and Satyam Panday.

The Trump administration said Saturday that it was suspending a program that pays billions of dollars to insurers to stabilize health insurance markets under the Affordable Care Act, a freeze that could increase uncertainty in the markets and drive up premiums this fall.

“Any action to stop disbursements under the risk adjustment program will significantly increase 2019 premiums for millions of individuals and small-business owners, and could result in far fewer health plan choices,” said Justine G. Handelman, a senior vice president of the Blue Cross and Blue Shield Association. “It will undermine Americans’ access to affordable care, particularly for those who need medical care the most.”

“We are very discouraged by the new market disruption brought about by the decision to freeze risk adjustment payments,” said Matt Eyles, the president and chief executive of America’s Health Insurance Plans, a trade group for insurers.

CNBC: US farmers could take a significant hit from trade war

“We can’t afford any increase in price,” Guernsey said on “Closing Bell” Thursday. “The difference between making money and losing money per head sometimes is just a couple of dollars. And whenever you’re looking at duties like this, it could make or break the operation.”

In fact, the tariffs might only make the situation worse for some farmers. The agricultural economy has been in a down slump for more than a decade. Profits from U.S. farms are forecast to reach a 12-year-low in 2018, according to the Department of Agriculture.

MarketWatch: Why the Trump tax cut may not boost the economy at all

The White House forecasts the tax cuts will lift growth to a 3% rate this year and it sees the economy remaining above that growth rate through 2025.

But Daniel Wilson, a vice president in the San Francisco Fed’s research department, and Tim Mahedy, a former associate economist at the regional bank, said these expectations may not be met.

Republicans’ big roll out this morning is just more smoke and mirrors and broken promises to the American people.

While the GOP Congress and Administration continues to take every opportunity to stack the deck for the wealthy and well-connected against hard-working families and seniors, Democrats are fighting for A Better Deal: Better Jobs, Better Wages, and a Better Future for everyone.